Skip to content
Home >> Moths >> Do Moths Have Mouths?

Do Moths Have Mouths? 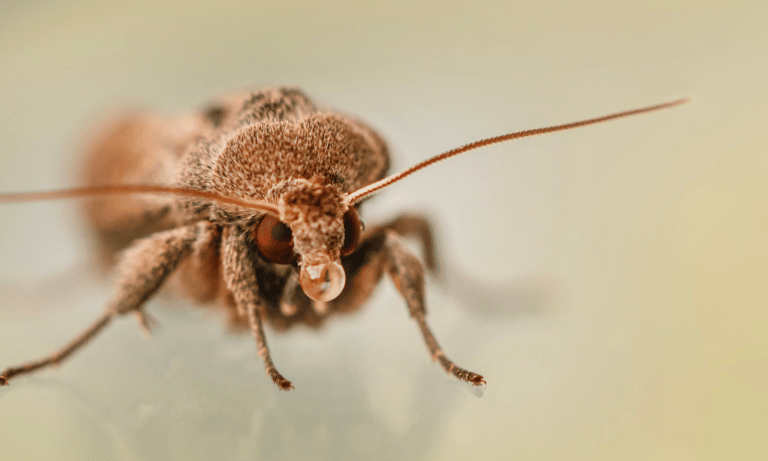 Although moths are hugely beneficial, both as pollinators and as prey, moths are often blamed for biting pieces of cloth out. What many people aren’t aware of is the fact that many adult moths do not even have the ability to eat. So, do moths have mouths or not?

No, the majority of moths do not have a mouth. In their larvae stage, as caterpillars, they have mouths but when they turn into moths they tend to lose their mouths.

There’s often a misconception that moths eat clothing. But this isn’t actually the case. Adult moths don’t eat wool; however, their larvae do nibble through clothes.

The absence of a mouth is often the cause of a short life span in some moths. Since moths do not have a mouth, they cannot eat and thus pass away after a fairly short period. The average life span for a moth ranges from one to three months, during which they are heavily focused on procreating.

Do Any Moths Have Mouths?

Moths with mouths use their proboscis or antennae to eat leaves and fruits and suck nectar from flowers. They use their antennas to find food and partners to mate with. However, moths without mouths do not eat at all.

When caterpillars grow old and mature, they become moths. This evolution causes their mouths to wither and eventually disappear.

As adults, they develop an organ known as a proboscis that is long and is similar to a straw. Moths use this organ for drinking liquids and nectars as they do not eat anything.

What Type of Moth Does Not Have a Mouth?

Generally, any large, adult moths do not have a mouth. They survive by drinking nectar. To this date, scientists are figuring out why moths haven’t been given a mouth by nature which greatly hinders that lifespan.

One of the prime examples of this is the Luna Moth. They are considered the most beautiful moth on the planet, and their name is derived from the moon. Sadly, the Luna moths only live for one week as they have no way to eat, and their existence is all about laying eggs and mating.

Due to the absence of a mouth, moths are unable to eat. However, they compensate for it by eating, in excess, during their caterpillar stage and storing the food.

For example, the rosy maple moths consume a lot of maple as caterpillars and then store this maple in the form of fat during their transition period as their mouth withers away.

How Long Do Luna Moths Live?

Luna moths only live for around 1 week because they do not have the ability to eat. They have to use the food they have stored in their body from being a caterpillar to survive for 1 week only.

Do Moths Have Teeth?

No, moths don’t have teeth. This is why they cannot bite and are considered harmless. However, as mentioned earlier, as larvae, they can bite through cloth and sometimes sting humans. These stings aren’t venomous and only cause mild irritation on the skin.

However, since moths do not have teeth or fangs, nature has given them spiny hair to protect themselves from predators. This hair can induce a skin reaction by causing red patches in certain skin types.

This is a skin condition known as Lepidopterism and is caused by only a small segment of adult moths and moth larvae whose spines contain a coating of venom that they develop as moth caterpillars.

It is unlikely that a moth will bite you. Moths do not have mouths nor do they have teeth and, therefore, do not have the ability to bite.

Do Moths Have Tongues?

Yes, moths do have tongues. The existence of their long tongues makes up for the lack of mouth in moths. These tongues are also known as a proboscis. The proboscis is an organ that is used to suck fluids and nectars.

Some moths have unbelievably long tongues. For example, the Hummingbird Moth’s tongue is longer than its entire body. Another moth known as Darwin’s hawk moth has a tongue length of a whopping 13 inches.

Even though the majority of the adult moths are mouthless, they are provided with long tongues or proboscis to make up for it. Due to the absence of a proper mouth, moths cannot eat. Thus, they use their long tongues to suck nectar and other such liquids.

Similarly, no mouth means no teeth or fangs. The lack of teeth might make them harmless to others but leaves moths in a vulnerable position. Therefore, nature has blessed moths with spiny hair to protect themselves from predators, which is a deterrent.

But their lack of mouth doesn’t mean they lack other common organs, for example, moths do have ears.