Skip to content
Home >> Moths >> How Long Do Moths Live Without Food? 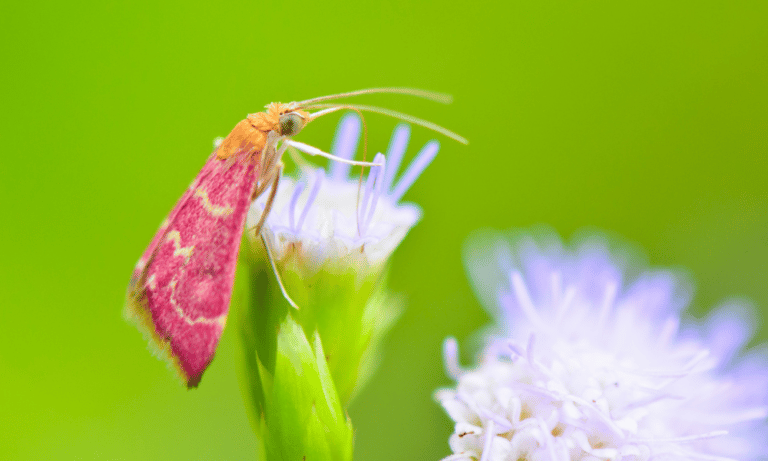 A moth is considered an adult once it has emerged from its chrysalis. How long it lives in this stage will depend on the species. It can vary from a week to a few months. But, how long do moths live without food?

If it doesn’t have access to food or lacks the ability to eat, as some moths do, then it will most likely die within a week.

How long it lives at the larvae stage will depend on several factors, such as the time of year and availability of food. If it doesn’t have access to food, it may not develop properly.

Should that happen, the larvae will die and never make it to adulthood.

Once a moth develops wings, it does not eat as ferociously as it did as larvae, so doesn’t need access to as much food. Adult moths feed only on a liquid diet.

Whether that is the nectar of flowers, or the dampness in fabrics, depends on what species it is. So, if a moth that relies on nectar gets trapped in your home, it will likely not have access to food and most likely die within a week at the most.

There are some adult moths that don’t have functioning mouths, so they do not require food at all. They gained all the nutrition they needed to survive when they ate greedily in the larvae stage.

The moths you see flying around your home are likely to be food or cloth moths. The moth will not die until it has mated or laid its eggs. This is done within a week of leaving its pupa, and then it will die naturally.

Unbelievably, some moths don’t develop a mouth which means they cannot eat anything. Atlas Moths are one of the most well-known moths that lack a mouth. They will eat as much as possible during the larvae stage to survive when they become a moth.

How Long Do Moths Take to Die?

A moth that spends most of its time outdoors will likely die within a few days of being trapped inside, and vice versa.

Should a moth find itself in the wrong environment, it will have no access to nourishment to provide it with energy. Nor will it find a mate, as it is out of its natural habitat.

How long a moth’s natural lifespan will depend on the species.

Generally, a male will live longer and mate with more than one female. The female will die once she has laid her eggs.  Moths can become stressed if they cannot find dark places to rest, which can also shorten their lifespan.

Moths spend varying amounts of time in each of the four stages of their lifespan. No matter which stages it is in, it can be vulnerable to death, such as being eaten by predators.

As larvae, these little insects become destructive munching machines. If it doesn’t have access to food at this stage, it can delay the pupae stage until all the conditions are right.

So long its local humidity is right, and it has gained enough weight, it will continue to survive. The length of this stage varies and can be anything from weeks to months.

In its pupa (chrysalis) state, it remains dormant. The pupae will not need to feed as they use the resources already stored from the larvae stage.

Most adult moths require warmth to be able to fly, so again it depends as much on its environment as it does its food supply.

How Much Food do Moths Need?

As a larvae, it is a gluttonous feeder.

This is also the stage when they do the most damage. Depending on the species, they can eat their way through food in your pantry, or clothes in your wardrobe. Then there are the carpet fibres on your floor, or the leaves on your plants in the garden.

The larvae are seeking to fatten themselves up so that they can pupate. It will eat so much that its body grows at speed. As it grows it sheds the old skin that has become too tight, growing a new one.

Moth eggs are tiny and difficult to see. But you will know if you have an infestation of larvae because of the damage they cause, which is due to their voracious appetite.

Once it reaches the adult stage, the moth no longer needs to chew food. It will now use its proboscis (straw-like tube), to soak up nutritional sweet liquids. Not only does it need the protein it receives from the nectar, but it also seeks sodium in salty liquids.

They need to sniff out their food because their eyesight is poor. Though they do prefer lighter-looking plants that stand out better in the darkness of night.

Once they land, the moth will use sensory structures placed in its feet and antennae to home in on the food. Without the right amount of nutrition, it will not have the energy to fly or reproduce.

If a moth lands on your arm, it could be sucking up the salt on your skin. Don’t worry, it doesn’t do this by biting and the chances are that you won’t even feel them there.

The lifespan of moths ranges from a few days to a few weeks. But, when a moth has no access to food or cannot eat, then a moth will barely survive a week.