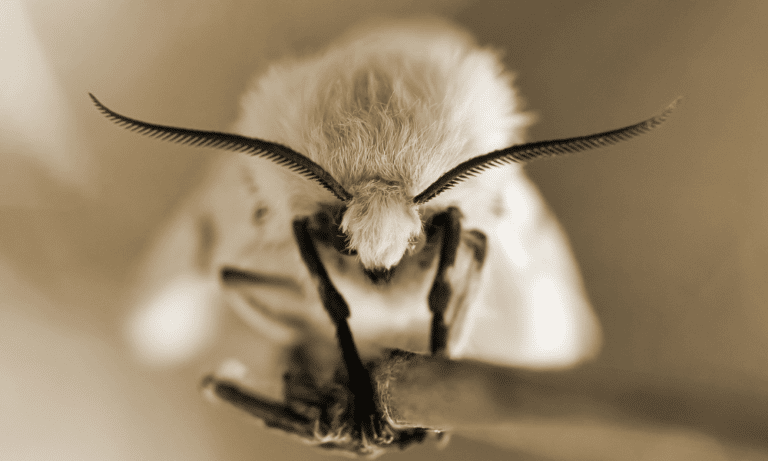 Have you ever sat in your garden at night, only to find a moth flying right at you? Well, why do moths fly at your face? What are they mistaking you for?

Moths will fly at your face because it will likely be brighter than your surroundings at night. Moths may also be able to detect salt on your skin, especially during warmer nights.

The fact that these primarily nocturnal creatures seem to be flapping in your face is all to do with a moth’s vision.

Imagine looking at the moon on a cloudy night. You will still be able to see its faint brightness, but it will likely appear hazy. That’s how moths see.

Although they have around 270o panoramic vision with their compound eyes, their vision is fuzzy compared to a human’s.

They navigate their flight path by focusing on a bright light with a certain part in their eyes, as a kind of compass. The moth tends to fly in a straight line, keeping a certain part of its eye trained on the light (this is why they also fly at lights).

They can also see the ultraviolet colours, which play a part in finding nectar.

It helps if you understand how a moth can smell too. It doesn’t have a nose, but it does have receptors on feathery antennae. It uses these to help it find nectar, and in the case of a male, it can smell the pheromones of a female.

Now that we understand how a moth sees and smells, let’s look at why they might be attracted to humans:

Do Moths Come Near You at Night?

Well, seeing as we’re likely to be asleep, we won’t know if they come near us, will we? But if it freaks you out, don’t worry because moths can’t harm humans.

Although some people are allergic to the small scales they shed from their wings.

Not all moths are nocturnal, as some do fly in the daytime. With all the light associated with the day, your skin will only be a faint light source to them. This means that daytime flyers are less likely to bother you as they have many other light distractions.

Most moths are nocturnal, meaning they come out at night.

If you happen to cross its flight path, it might be distracted by you. If it’s very close to you, it could be tempting to fly nearer to check you out and make sure you’re not a food source.

If it’s not found its source of sodium for the night, then you may become its target for a bit of salt intake.

An adult moth doesn’t have teeth, so the process won’t harm you in any way. If it creeps you out the thought of a moth sneaking a quick lick of your skin while you sleep, you could place deterrents in the room.

Moths dislike the smell of peppermint oils, and certain herbs, such as rosemary and lavender.

Why Don’t Butterflies Fly At Your Face Like Moths?

Butterflies have different habits than moths. They still belong in the same order of insects known as Lepidoptera, but that’s only because they both have scaled wings.

Some scientists believe that butterflies evolved from moths after they ventured out in the daylight. Of course, that process would have taken millions of years to evolve. That is likely why most moths are nocturnal but not butterflies.

Butterflies use the brightness of the sun to navigate.

They will be settled somewhere soaking up the sun’s heat on their wings throughout the morning hours. Because butterflies have adapted to daylight viewing, their eyesight is not as fuzzy as a moth’s.

Moths have different things to contend with in the darker hours, such as bats. Whereas the butterfly doesn’t have to worry about such predators, so it’s evolved to be more in tune with daytime creatures.

A butterfly does not have as good a perception of smell as a moth does, so it’s unlikely to pick up the CO2 in your breath. A butterfly is more interested in sensing the air temperature, mainly if it’s a species that migrates or hibernates.

The only time a butterfly is likely to land on you is if you are wearing bright colours, or you smell sweet and sugary. And yes, in case you were wondering, the butterfly is also interested in the salt on your skin.

Moths may fly at your face for multiple reasons.

These could include the fact that your face might be illuminated at night, making it brighter than your surroundings. If you’re sweating, moths may be attracted to the salt content of your sweat. Moths may also, unbelievably, be attracted to your breath!

Why Do Moths Turn to Dust?