Skip to content
Home >> Moths >> Do Moths Sleep on Walls? 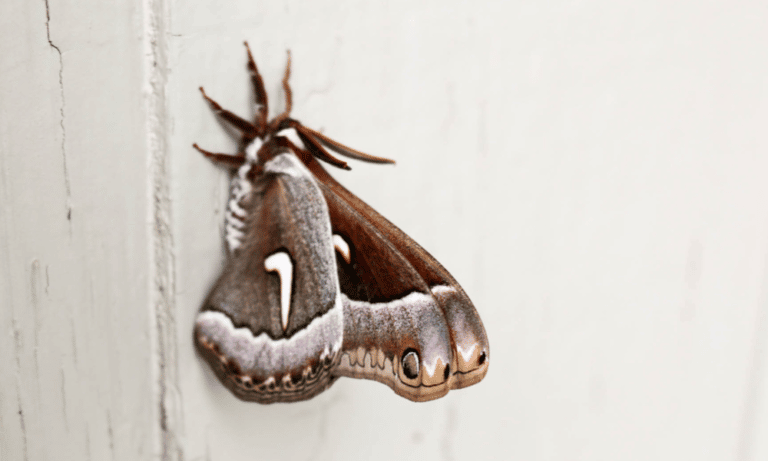 Sleep is a necessary function for all living things, it serves as a way of resting our organs and recharging our energy. We humans don’t function too well if we don’t get our heads on a pillow and get regular unbroken sleep. But insects’ sleeping patterns are still a bit of a puzzle.

The moth will hide in tiny nooks and cracks to rest from all the hard work of its nighty adventure. But it doesn’t have eyelids, so it doesn’t sleep as such.

Therefore, no, moths do not sleep on walls because they do not go to sleep as we know it. However, they might be resting on the wall after spending the day hunting for food and a mate.

A moth does not sleep, as we do, nor does it hibernate. Instead, it goes into a state of torpor.

This is when it will recharge its energy levels, much like we do. It can still suffer sleep deprivation if it does not manage to get the necessary rest, especially after a busy night of feeding and seeking a mate.

Do Moths Sleep in the Day?

Being at the lower end of the food chain, the first thing to consider will be finding a place that keeps them safe from predators while they rest.

To help with this, they will keep very still wherever they are resting.

Unlike humans who frequently toss and turn when sleeping, a moth cannot afford even to twitch. One never knows if predators are on the prowl for their next meal.

The circadian rhythm refers to the 24-hour cycle of our planet. According to the University of Padova in Italy, a moth’s cycle is regulated by its brain. This is where its circadian rhythm has evolved to react to environmental stimuli.

Most moths are nocturnal, meaning they’re more active in the dark when most of us are busy sleeping. But it isn’t the same for all moths. Some prefer to be active during daylight, such as the Emperor Moth and the Ruby Tiger.

A study by the Florida Museum indicates that up to 25% of moths are day flyers.

This is no surprise when there are over 160,000 varying species of moth. They also note that the daytime flyers are often the more brightly coloured ones, who like to show off their wares for mating purposes.

Where, then, are our drably decorated night flyers hiding as they take their daily nap?

What is known is that the moth is adaptable to its environment. They have evolved to match the colours of their general surroundings. This could be why we cannot always see them as they rest.

Moths are solitary creatures and do not have the safety of a nest or colony, so it needs to find a safe place to shelter. That’s not to say you won’t find them in large numbers, as they are seeking the same kind of place to rest.

Why Do Moths Stay in the Same Spot for Days?

When a moth is in flight, it will flutter at speed, seemingly in all directions. If you were to find a moth looking very still upon a darkened wall or hidden in a crevice, the chances are it will be lethargic because it is resting.

It may be so still that it looks dead and cannot respond to stimuli quickly.

This could be a good time to gently remove them from your home, but take great care, they are fragile little creatures.

Adult moths are short-lived as their only purpose is to reproduce. They will spend much of their time seeking safety. Many moths will not wander far from the area where they hatched.

Though there are exceptions to this, as some do migrate. As a rule, however, they don’t generally move around too much.

The Belted Beauty female does not even develop functional wings. Instead, she crawls about her immediate environment doing all she needs to do in her short life, all close to where she was born.

Once a moth finds a safe place, it will linger there if the conditions are right, especially if it has mated or senses that a mate is around.

Dreaming is related to the nervous system and the brain. Believe it or not, studies have been conducted on this topic in relation to moths.

A human will dream during the Random Eye Movement (REM). The studies on moths seem to indicate that they do not experience REM, so therefore they likely do not dream.

When you consider the average moth is only a couple of centimetres in length, then it’s no stretch of the imagination to realise that its brain is tiny.

Its nervous system is not as developed as many sentient creatures, so this could be why they don’t appear to dream.

What Does It Mean If You Dream About a Moth?

Spiritually, it symbolises that you are about to have a significant change in your life? One supposes this is connected to the metamorphic changes a moth goes through in its development cycle.

You see a moth still on a wall so wonder whether moths sleep on walls or not? Well, the moth might be resting but it is unlikely to be sleeping as they cannot fall asleep like humans and other animals can.