Skip to content
Home >> Moths >> Do Moths Have Blood?

Do Moths Have Blood? 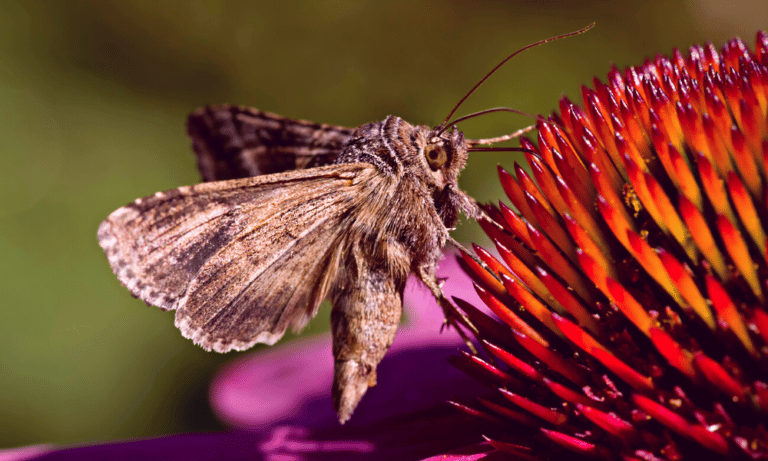 When it comes to insects, moths always stand out due to their unique features and bodily functions and organs. After a moth dies, we never notice blood. Instead of blood, you might often notice an odd-looking fluid or liquid oozing out. Some might also even notice the dust. Why is that so? This makes us wonder, do moths have blood? If not, then what do they have instead?

Like most insects and invertebrates, moths do not have blood in their bodies as humans do. Instead, they have hemolymph.

Hemolymph makes up for the lack of red blood cells in moths. But, the liquid you notice when a moth dies is not red.

Moths have a proper nervous system and an aorta responsible for transmitting hemolymph all across a moth, primarily its brain and wings. This is why the first thing a Luna moth does after hatching is that it hangs down to ensure the hemolymph reaches its wings so it can then fly properly with full feeling in its wings.

Were you to dissect a moth, it won’t bleed as mammals do. Instead, it releases a unique fluid called hemolymph. Moths will not bleed the typical red blood you might be used to, but instead, you will notice a blue-green fluid oozing out.

Are Moths Made of Dust?

When a moth dies, it’s as if its body releases dust. But, is this because moths are made of dust? No, moths are not made of dust. The dust you see when they die is actually made up of tiny scales from their wings.

What is Hemolymph in Moths?

Since moths do not have blood due to the absence of red blood cells, nature has blessed moths with a haemoglobin-like compound known as hemolymph. The primary function of hemolymph in moths is to send nutrition all over their body.

A moth’s circulation system takes the hemolymph and pumps it all across their abdomen via pores and then later to other body parts.

Like blood, hemolymph flows through the moth’s body in the form of a fluid and contacts all the tissues. The hemolymph is made of plasma and, like blood, contains cells known as hemocytes. Hemolymph plasma is made up of many other chemicals besides hemocytes.

The hemolymph also allows for the transportation of oxygen in a moth which is often deemed unnecessary for insects. This transportation is completed via the presence of hemocyanin.

Hemolymph is also used to maintain the body temperature of moths and keeps all other organs healthy and functional. Like with blood, the hemolymph travels faster under warm conditions, and the circulation works the opposite under colder conditions.

Apart from hemocytes, the hemolymph is composed of many other elements. One such element is nucleating agents. These agents protect the cells and are found in many other insects such as beetles and flies.

Certain inorganic elements such as salts and compounds such as chlorines, sodium, proteins, and carbohydrates are also present. Amino acids are also found in high levels; however, their concertation may vary depending on the species of moth.

Proteins are an integral part of this fluid, and their classification depends on their function. Some of the most well-known protein compounds such as lipid, chroma, and enzymes are also present. The lipid plays a crucial role in helping the moths to fly.

What Colour is Moth Blood?

Hemolymph in the majority of the insects is either pale or has shades of blue or green. In moth, the hemolymph contains hemocyanin. This type of protein is based on copper, and it changes into blue colour.

Thus, a moth’s blood or body fluid is bluish and greenish. However, when adequate oxygen isn’t provided to this solution, it changes colour and turns grey.

Do Moths Have Hearts?

Yes, moths have hearts. A moth’s heart, also known as the dorsal vessel, is located in the moth’s abdomen and has a tube-like shape. The heart helps with the pumping of hemolymph throughout the moth’s body with the help of vessels.

The dorsal vessel is one of the most integral components of a moth’s circulatory system. It runs from the abdomen and the thorax. It picks up Hemolymph and pushes it towards the head.

There are alary muscles present in every dorsal vessel’s chamber. This vessel is placed by the ligaments in the hemocoel. The alary muscles take charge of the Hemolymph’s flow by expanding and contracting movements.

Insects are known to not have blood. Similar is the case in moths, like many insects, where they contain a fluid known as hemolymph.

Since this fluid doesn’t have any red blood cells, it isn’t red. Rather, it is bluish-green due to traces of copper present in it. This is why you’ll never notice a dying moth oozing out blood. Instead, you’ll find hemolymph coming out.