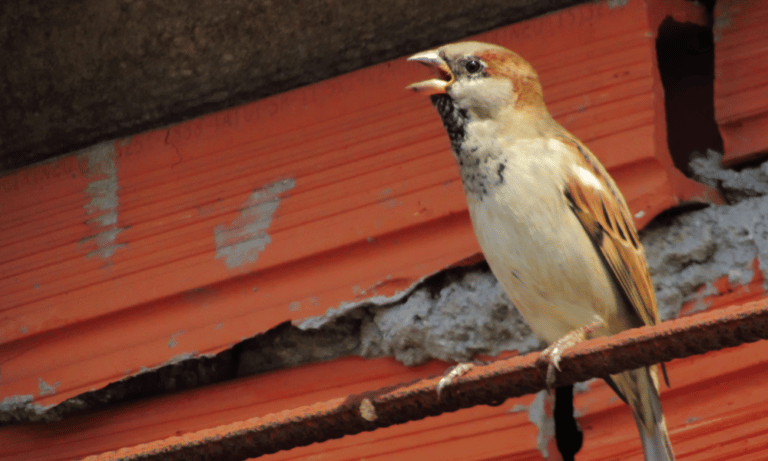 Because they live in social flocks, chirping is the primary way they communicate with each other. They are such noisy little birds together that the term for a group of house sparrows is a quarrel.

Living within a colony, they build family nests close to one another. They will aggressively protect their nests, even to the point of dive-bombing an intruder, despite their small size.

When there are up to 10-20 pairs in a flock, each producing up to 5 eggs per clutch, it’s going to get noisy, especially in spring.

The house sparrow, as the name suggests, tends to nest in crevices in buildings, but like the tree sparrows, they will also nest in bushes and trees. They are familiar with humans and will show little fear of them.

But this little brown bird is a clever thing, resourceful, intelligent, and opportunistic. No doubt that behaviour has helped their survival, but they have declined in the UK since the 1970s.

With an average lifespan of up to 3 years, you’ll see them fluttering about all year round. Though they do sleep a lot in the colder months, so you should at least get some peace in the winter.

When Do Sparrows Chirp?

They won’t be the first up at the chorus dawn, as that’s usually the larger species, such as thrushes and blackbirds. But they will join in a few hours after daybreak as the early risers are quietening down.

In spring, the sparrow will chirp at its loudest before it gets light because predators can’t see them so well then.

Once the daylight hours come and it starts to warm up, they will be busy collecting food for chicks. Though, you’ll not hear them chirping once it becomes dark as they will be hunkered down for safety.

In the colder winter months, they need to conserve their energy, so you are unlikely to hear much birdsong then. Most of their efforts will go into finding food and staying warm and dry.

Are Sparrows Talking When Chirping?

Typically, if you see a little sparrow on a branch, chirping away to the world, it will be the male.

Sparrows chirp to convey messages to one another, and the male will have more to say than the female.

The male house sparrow is a brighter colour and is bigger than the female, known as the hen. The male will have a little grey cap and a black bib to the front of his chest.

The female has more of an overall brown colouring. The tree sparrow is a little smaller than the house sparrow, with the male having a brown cap and grey chest. Tree sparrows are more reserved and shy around humans.

While sparrows tend to stay with the same partner every year, they will seek other partners should their present one disappear.

What Does It Mean When a Sparrow Chirps?

A single chirp is usually quite loud as all their energy is put into that sound. Follow the sound, and you’ll most likely see a proud little male showing off how handsome he is.

The only time a female will use the same chirp is if something has happened to her long-time mate.

When the sparrows are all together, they will make higher-pitched chirps as they socialise. Whilst it might sound aggressive, they’re simply having a group chat with no animosity between them.

Finally, there is the chatter, used by both males and females, with various meanings.

If a male chatters to another male, he’s usually warning him off from his territory. The female uses the same sound when she communicates with her male. Perhaps he’s upset her and she’s giving him a telling-off!

If she’s single, she could be telling a male that she’s not interested in him. When a female chirps, it tends to have a more negative connotation than pleasant ones. If she’s chattering to another female, it’s a warning call to get away from her nest.

The next time you hear a quarrel of sparrows, remember that they’re busy vocalising to one another, using one of their two sets of vocal cords. They like to stay in touch because they are social creatures.

Let’s not forget the loud call of the juvenile when they’re calling out for their parents to feed them. They can be very rowdy until their tummies are satisfied.

One thing is for sure, if you have noisy sparrows in your garden, then all is well with the world.

House sparrows chirp so much because they are often found in large groups. Once you get multiple house sparrows together trying to communicate, they will make a lot of chirping.