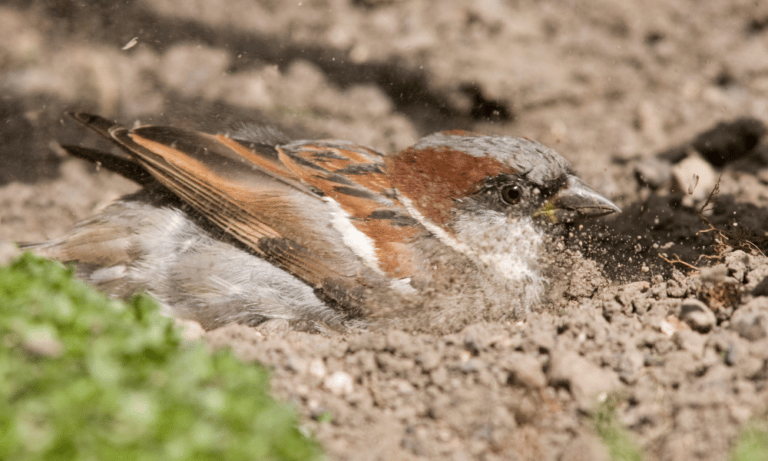 Sparrows need to keep themselves clean. That’s why you religiously fill that water bath in your garden, right? Well, did you know that some birds can bathe in mud? So, do sparrows take mud baths like other birds?

You would think that having gritty dust in your feathers might be a bit counterproductive when it comes to keeping clean. But sparrows love to roll around in dry mud and take mud baths.

The humble little sparrow doesn’t want to bathe in thick mud as an elephant does, instead, they’re looking for dry, fine dust. Dust bathing is quite a technique and must be done correctly for the little bird to get the full benefit.

While most birds prefer a quick dip in shallow water, not the humble little sparrow. And it’s not the only bird that prefers a dry bath as opposed to a wet one.

Thrushes, larks, and wrens all like to roll about in dry, gritty dirt. Even bigger birds too, such as kestrels, raptors, and the huge ostriches and emus, all enjoy a roll in the dust.

Sparrows can often have a few dusty baths a day, especially if they’ve found themselves a good, safe spot that they can return to.

You may see a single sparrow dusting, while others are standing by awaiting their turn. If you witness a miniature dust cloud and a bird is acting rather oddly on the ground, fear not; it’s having a dust bath.

What is the Purpose of Dust Bathing?

Dry bathing has much the same purpose as wet bathing, to cleanse themselves, but how does this work?

First, the bird will begin by scraping its talons on the ground, breaking up the earth.

Did you know that the sparrow is known to have quite large feet for its size? The reason for this is so that it can scratch the ground for its primary source of food – seeds.

The purpose of scratching at the ground when dust bathing though, is to separate the dry soil and create a small dent, known as a wallow.

Once they have a comfy wallow, next, they will lower their breast and rock around to wear the hole even deeper. At the same time, it may flap its wings to create movement in the dry dust. This motion spreads the dust up into the air to settle in their wings.

While all this is going on, the little sparrow will fluff up its feathers and spread out those all-important tail feathers too. It’s wanting the fine dust not only in its feathers, but also to reach deeper, and onto the skin.

Finally, it will rub its head and cheeks in the wallow, now and then stopping to check out its surroundings for predators.

Being on the ground makes it vulnerable to predation, so it will soon fly off onto a nearby branch to have a good shake-out session.

Now it’s time for a good old preening session to spruce up its feathers. All this effort is not about being vain because they want to look good; it’s about getting a good balance of healthy oils into their feathers.

The dust plays its part in soaking up any excess oils that could weigh them down in flight.

A sparrow will still enjoy a water bath, as this is a means of ridding themselves of parasites, or even cooling down in hot weather.

After a water bath, they usually follow up with a dust bath because that is their preferred way of keeping a healthy plumage.

Sparrows have as many water baths as they do dry, sandy ones, but it does not rely on the water alone to keep themselves clean. The technique of water bathing will be much the same as dry bathing.

It will fluff up its feathers so the water can reach the skin, and then put its belly and breast into the cooling liquid. If temperatures are high in its environment, the little bird may even dip its head and flap its wings to create a shower of cooling water all over its body.

Bathing, wet or dry, will always be followed by preening and then even a little sunbathing in the summer months. The heat of the sun helps to dry off any excess water and, as with humans, the heat makes them feel good too.

To preen, birds use their beaks to nibble along the barbs (branches) of individual feathers. This helps to release oils from a gland underneath the tail (known as the uropygial gland and called the Parson’s nose in chickens).

Using its gill, it will spread the newly secreted oils all over its feathers. This behaviour increases its body’s natural waterproofing, as well as ridding itself of bacteria.

Their need for a bath is very different from that of humans. Sparrows don’t only rely on water bathing to reduce their temperature; they also use their breathing for this process. When you see a bird with its beak open all the time, as it rests on a branch, it’s most likely cooling off.

It might sound odd to a human, but yes, sparrows bathe in dust. It is a great way for a sparrow to control the balance of oils in their body. A sparrow will also take a wet bath in water to clean their bodies.