Can Robins Help With Your Garden Pest Control? 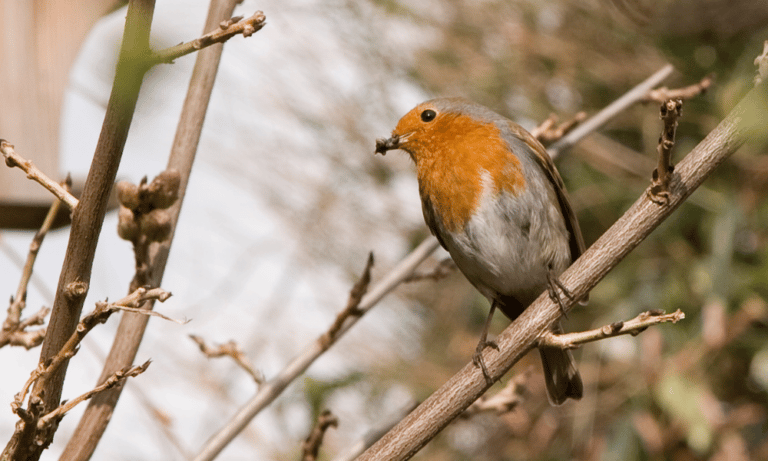 Many birds are known to eat problem insects, such as aphids and slugs. So, do robins eat slugs and can they help you with your garden pest management?

Yes, robins are among many other birds, such as blackbirds and starlings, that like to eat slugs.

If you want to rid your garden of those annoying slimy, slugs that are eating up all your best plants, then try to attract robins into your garden.

There are a few ways you can do this, such as by providing nesting boxes. Hide them amongst the vegetation of shrubs or tree branches, so that the robin feels safe.

Once you’ve got their shelter covered, the following way to attract the garden-friendly robin is to provide them with food. Again, place any bird feeders where a bird feels safe while it eats.

They’re unlikely to approach your feeder if it’s in the middle of an open lawn. It’s best to hang the feeders on branches if you can.

Although some birds do prefer to feed from the ground, and a robin is one of them. But they will feed from the bird feeder, too, especially in the colder months.

A healthy robin can have up to three broods a year if weather permits. That means they’ll find three different nesting places to raise the chicks. If you’re successful in encouraging them to stay in your garden, you can expect lots of fledgling robins fluttering around too.

Robins, along with thrushes, jays, and even owls, enjoy tasty treats such as snails.

It’s not their favourite food, but the snail can provide a great source of calcium. When a bird’s eggs have a very thin shell, it can mean that the parent had a calcium deficiency.

Snails tend to come out above ground in wet conditions, making them an easy target to any passing robin. The robin is not a shy creature, if anything they’re quite bold and happy to see off any competition for their food.

Robins don’t break the shells, instead, they take the opportunity to swoop in when the snail happens to pop out of its shell.

Did you know that certain species of snails can survive the journey through the gut of a bird?

It is only with a small population of birds known as the Japanese White-eye (Zosterops japanicus). It takes around 30 minutes for the tiny snail to journey through the gut and come out of the other end, still intact and alive.

Do Robins Eat Other Insects?

What the robin eats the most will depend on the time of year. In colder months, when insects are not so widely available, it’s a good time to offer alternative food such as dried mealworms.

In the warmer months, insect skeletons provide a great source of calcium for the egg-laying female robin.

The robin also enjoys tasty morsels, such as woodlice and millipedes, along with spiders. Caterpillars provide protein, along with beetles and worms.

If you’re having a digging session in your garden, don’t be surprised if a bold robin turns up to feast on your labour. You will have churned up some tasty morsels in the soil. The brave little robin will be happy to get up close to you and feast on any unearthed invertebrates.

What Else Do Robins Eat?

Put out some mealworms on your bird feeder tables and you’re sure to attract a robin.

Robins also enjoy seeds, such as sunflower hearts, and will eat from suet balls, as well as from fruit trees and bushes.

Birds don’t eat the seeds of such fruit but they do like the sweet, fleshy parts.

They won’t eat full peanuts, but if they’re crushed up then this little red-breasted bird will be happy to munch away.

Both males and females are red-breasted, so it can be difficult to tell them apart. If you look closer, you may notice that the female has a few black spots on her deeper orange breast.

Did you know that robins prefer a feeder table to a hanging? Although they’ll still eat from a hanger if there’s little food on the ground.

A feeder table is better for robins. if you have such a table, make sure it has a roof over it because wet food will grow bacteria that can be harmful to birds.

Providing water baths all year round is ideal for all birds, not just robins.

In the UK, there is a species of robins that stay there all year around. But many European robins are migratory birds, especially females. Once they’ve found a home they favour, they’ll return time and again.

Not only that, but they’ll also defend their territory fiercely. When you hear a robin singing out loud and acting bold, it will be the male warning off other robins.

Do you have more questions about robins and their ability to eat slugs? Then have a look over these:

Yes, robins will eat a combination of bird seeds, mealworms and sunflower seeds. They have a varied diet but are also not particularly fussy.