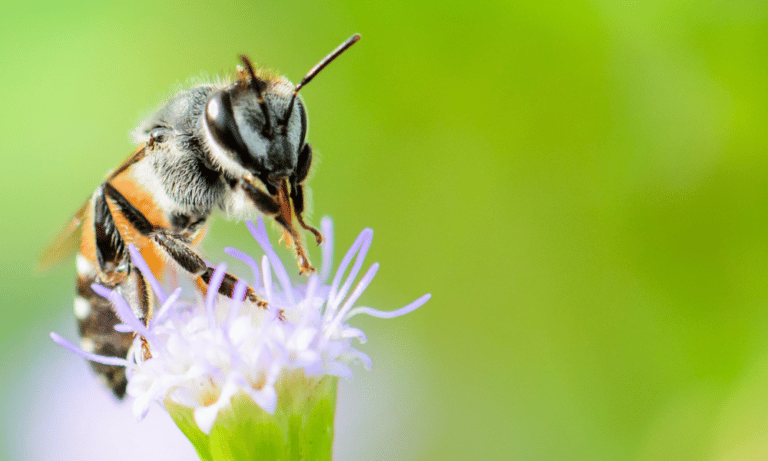 When we think of insects that bite, we most often think of mosquitoes, spiders or aphids. But, can bees bite too or do they only use their stingers?

Yes, bees can bite. While a stinger tends to be the defender of choice for bees, they can bite to fend off unwanted visitors.

Although bees can bite humans, it’s not something they will do very often. Instead, their ability to bite is especially helpful in warding off smaller insects, like wax moths, as the bee’s stinger is too large for these tiny beings.

How Do Bees Bite?

It is important to understand the anatomy of a bee. Bees do not have teeth or mouths in the traditional sense. Instead, bees have mandibles that are almost like pincers.

Within the curved part of the pincer-shaped mandible of the bee, are jagged grooves naturally formed in the mandible – similar to teeth.

Bees use their mandibles to attack and kill prey and potential threats as they enter their hives. They open their mandibles and then quickly close them to grip down on the bodies of the victims before secreting an anaesthetic substance that paralyzes them.

Similar to the substance that is secreted when a bee stings you, this numbing chemical sedates and causes great pain to the affected creature.

The chemical secretion comes from glands located in the bee’s mandibles. Luckily for the bee, it will not die if it bites.

If you didn’t know, when a honeybee stings, the stinger becomes embedded in the flesh of the victim due to a barbed end. The barbed end acts as a hook as it attaches itself and secretes a painful substance. The bee dies as it flies away because the stinger is attached to a venom gland in the bee’s abdomen.

Unlike the venom sac in the honeybee’s stinger, the ones located in the mandible stay intact after a bee bite.

Do Bees Have Teeth?

No, bees do not have teeth like humans or other mammals do. Instead, they have mandibles which do have jagged grooves which can act as teeth to bite and latch onto smaller insects.

Do Bees Have Mouths?

Yes, bees do have mouths in terms of an opening in which they can take in food. However, it is not a mouth like ours. Instead, they have pincers which feed food into their mouth opening.

What Happens If a Bee Bites You?

Bees tend to only bite smaller creatures that are too small for their stingers to be effective on. When it comes to humans and larger animals, bees will almost always sting or attempt to sting you.

Due to how rare it is for a human to be bitten by a bee, you probably did not even know that bees could bite. But what happens if you do get bitten?

The most important thing is to remain calm. Avoid swatting at the bee as that could make it angry and more likely to try to sting you as a form of self-defence. Quickly remove yourself from the situation and then assess your bite.

Most of the time, a honeybee will not be able to break skin when it bites you. While the bee can release an anaesthetic through its bite, it is only enough to subdue a very small insect.

Even if the bee is able to break the skin, the level of chemicals released by the bee will not be enough to harm you.

Wash the area with soap and water thoroughly and watch for any redness or swelling. Be sure that you did not mistake a bee bite for an actual bee sting. In that case, be sure to remove the stinger with a credit card and clean the area again.

Keep an eye out for any signs of allergic reaction and seek medical attention immediately if you begin to develop shortness of breath or a sudden onset of hives or rash. Most of the time, a bee sting, though it may hurt, is essentially harmless. You can learn more about bee stings here.

Why Do Bees Bite?

Bees bite to defend themselves, their colonies, and their hives from predators that are too small to sting.

A bee knows that its stinger is the most effective way to defend itself, but sometimes it is not an option.

Wax moths, for example, are small insects that can be detrimental to hive health. These moths are also too small for a honeybee to sting. Instead, the bees will use their mandibles to pierce the moth. This will allow an anaesthetic-like chemical to subdue the moth while the bee finishes it off.

Bees will rarely bite humans or larger threats as it is an ineffective way to ward off potential enemies. Even if a bee does bite you, the amount of chemical secretion that a human could get from the bee is so minuscule, that it would not affect the human at all.

Even though bees can bite, they rarely bite humans. Bees use their strong mandibles complete with chemical glands to subdue and ward off enemies like the wax moth.

Larger threats are easier to take care of with bees’ powerful stingers.

Anyone who has been stung by a bee would agree that the venom in the bee sting is not easily forgotten, but if one was to be bitten by a bee, they may not have even noticed. A bee’s mandibles may not be strong enough to break the skin on larger animals and the amount of anaesthetic that would be released would not even register in a human’s body.

If you think you were bitten by a bee, be sure to check it was not a sting. Look for a stinger and wash the area well before monitoring for signs of an allergic reaction.