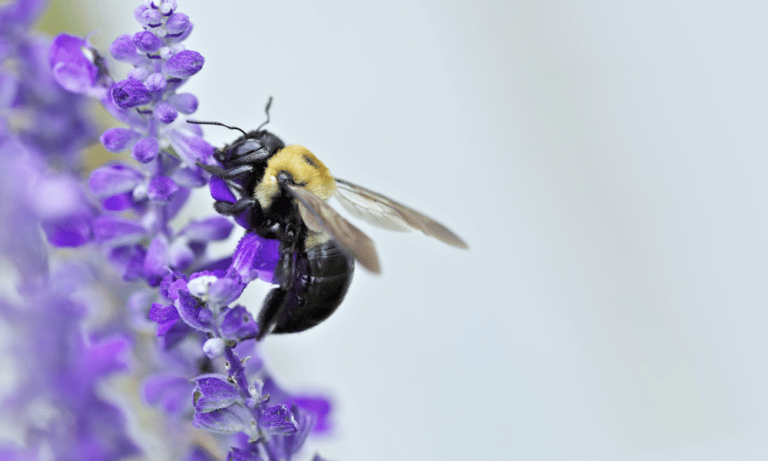 From early spring until the end of the summer months, Carpenter bees can be seen buzzing around many UK gardens. They will be busy doing many things, including collecting nectar. But do carpenter bees make honey with this?

No, the carpenter bee is a solitary species that does NOT produce honey.

To produce honey takes a lot of team effort, and this little bee is not a team player. But that doesn’t mean that it’s not essential to the environment because it is a very active pollinator.

With over 220 different species of solitary bees in the UK, our native carpenter bee looks very similar to a smaller bumble bee. It can grow up to an inch long and has a single yellow band across a hairless black body.

If you should get up close enough to see it, you’ll notice that the female has a single black dot on its yellow band. However, the carpenter bees’ appearance can vary in other countries.

Another difference between the male and female carpenter bees in the UK is that the male does not have a sting, whereas the female does. Should she sting you, know that it can be painful.

Generally, they’re non-aggressive bees, that is unless you get too close to their nests, or they feel threatened. Both the male and female will guard the nests and play their part in rearing their young.

With carpenter bees, in the UK, there will be two different generations produced throughout the year. The adult bees that emerge in spring will die out around June. Their offspring will then emerge and lay the eggs that lay dormant over winter.

Do Carpenter Bees Form a Hive?

Because they’re a solitary species, the carpenter bee does NOT live in a hive, but they do make nests.

Why do we call it a carpenter bee?

Consider the honeybee that lives with other bees in a hive, and between them, they build honeycombs of honey. Then there is the plump bumblebee, who is also solitary and digs a hole in the ground for its nest.

But carpenter bees tend to burrow into soft wooden structures made of pine, spruce, and cedar. There it will nest to lay its eggs, hence the name Carpenter.

The female uses her powerful mandibles to bite her way through the softer wood.

This is so that she can lay her eggs in a safe place, leaving a portion of pollen for each egg for the young to feed from. When the eggs first hatch, they will be fed mouth-to-mouth by both parents.

It’s not that the carpenter bee eats the wood, because they don’t. Wherever they dig their nests, there will be little piles of sawdust that they discard. That’s why loggers class the carpenter bees as a nuisance that causes structural damage if left untreated.

For others though, this humble little creature is simply fascinating.

If you want to attract carpenter bees into your garden, but don’t want them drilling holes in your wooden fence, try hanging out an improvised bee house. Make it yourself by using an untreated softwood log.

Drill a few holes in it to encourage them to explore, and they’ll do the rest themselves. Position it close to nectar plants so that they discover it when they’re feeding.

Because they’re not honey makers, carpenter bees do not collect nectar to make honey, but they will collect it to feed their young.

And if nectar is not widely available, as in the later brood of the year, studies have shown that it’s not uncommon for them to steal nectar from another nest.

They enjoy the sweetness of nectar from plants, which provides them with the necessary energy they need.

To encourage them into your garden, you could plant some of their favourite nectar providers. Try blueberries (Vaccinium), or wisteria (Wisteria sinensis). Other plants they like are geraniums (Geranium maculatum) and butterfly milkweed (Asclepias tuberosa).

Let’s not forget that while they’re out and about feeding on nectar, they’re also busy pollinating the plants.

In the UK, the first brood will remain in the home they were born in. When their brood is born in the spring, they will fly off to look for a new home. This behaviour will vary in different countries because of the different climes.

How they are predated also depends on which country they are native to, but in general, they will be eaten by birds. Woodpeckers (Piciformes) in the UK have a liking for carpenter bees, as do bee-eaters (Meropidae), mantises (Mantodea), and also the powerful robber fly (Asilidae), will predate carpenter bees.

The robber flie is also known as an assassin flie, because they’re aggressive predators who wait to ambush their victims.

Given the hard life the carpenter lives, and how its pollination habits will help care for our environment, the next time you spot one, show it a little care. Build it a nest if you are able and encourage this beautiful little creature into your life.

Do you have more questions about carpenter bees and their ability to make honey? Then check out these FAQs:

Do All Bees Make Honey?

No, not all bees make honey. Generally, it is just honey bees (hence their name) that produce the honey you can buy in the shops.

Yes, like bees in general, carpenter bees collect nectar and, while doing so, pollinate the plants they visit.