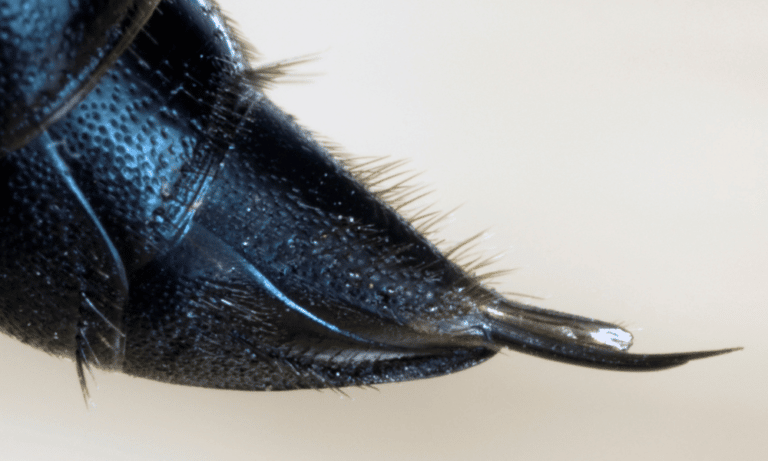 One of the common features of bees is their ability to sting. But, is this the case across all bee species? Do carpenter bees sting, for example?

There are around 550 species of stingless bees (Mellponini) out there too, so we don’t need to be afraid of them all. Then again, most bees are docile little creatures and unlikely to sting unless they fear for their offspring or believe they’re in danger.

Do Carpenter Bees Have Stingers?

Not only does the female carpenter bee have a stinger with venom, but she can also sting more than once. The male, as mentioned, has no stinger.

A male carpenter bee doesn’t fly far from where it hatched. While males can live for up to a year, they will die once they’ve mated. But while he’s alive, he’ll defend his territory from anything that moves.

Because he has no stinger, he’ll act aggressively in other ways. His body is larger than the females, and he’ll use it to dive-bomb any intruders. He’ll also use his wings to buzz loudly because it’s his job to protect any female nests in his patch.

He’ll return to a hole at night, but as he dies after mating it’s unlikely to be the hole of his mated partner.

When it comes to the sting, it’s the female who has all the power. Lucky for us humans, she’s very reluctant to use it.

For most of her 2 years of life, she’ll be busy forming a nest hole and laying her eggs and caring for the larvae. She’ll only use her sting if she considers herself, or her offspring to be under threat. In her nest, she’ll not only be caring for her offspring, but she’ll also store nectar for the colder months.

Do Carpenter Bees Die When They Sting?

A female carpenter bee does not die after using her stinger.

The female carpenter bee has a smooth stinger, but a bee with a barbed stinger usually dies after stinging. That’s because the barbed stinger can become attached to the skin of the victim. When the bee departs, the lodged stinger pulls out part of its abdomen.

A female carpenter bee has a pointed tubed appendage that’s filled with a toxin protein known as Melittin. It doesn’t cause much harm to humans unless they have an allergy to the venom of bee stings.

When a carpenter bee stings a human, there’s nothing left behind in the skin, other than a little venom. You’ll know if you’ve been stung because you’ll feel a sharp pain, followed by a burning sensation around the sting.

When you look at it, you’ll see a tiny puncture mark and the skin around it will become pink and inflamed.

After cleaning the area with water, treat the wound with cider vinegar, or a small amount of baking soda paste. Some say honey or even toothpaste will work too. Such compounds soothe the area of the skin and help to reduce any swelling.

Considering the female carpenter bee has a strong set of mandibles, one may assume that she could give a nasty bite as well as stinging.

Contrary to this belief, carpenter bees do not bite because they do not possess teeth.

What then are the mandibles used for? Basically, it’s like an extension to the female’s jaw, and she used them to dig holes in wood. If you’re lucky enough to look up close at her, you’d see her jaws at the front of her face look a little like a set of forceps.

She’ll use them to tear away at the softwood in circular motions, creating perfectly round holes and tunnels. Drilling around an inch over a few days, it does take her some time to complete the tunnels and chambers of her nest.

At the same time, her body will vibrate to help with the drilling motion.

While she might chew on the wood, she won’t eat it, though they do masticate small amounts to plug up each egg chamber.

Should a bee be buzzing around you, it’s best not to flap your arms around. Let’s not forget that if it’s a male carpenter bee, he’ll keep bombarding anything that moves.

If it happens to be a female with a stinger, she’s not interested in stinging you, she just wants to know if you’re a flower. Once she gets her bearings, while you stand still and close your eyes and mouth, she’ll soon buzz away again.

Do you have more questions about carpenter bees and their ability to sting? Then check these FAQs out:

Is a Carpenter Bee Dangerous?

It is no more or less dangerous than most other bee stings. Usually, they will hurt, come up in a rash and then go away. The only exception is if you are allergic to stings.