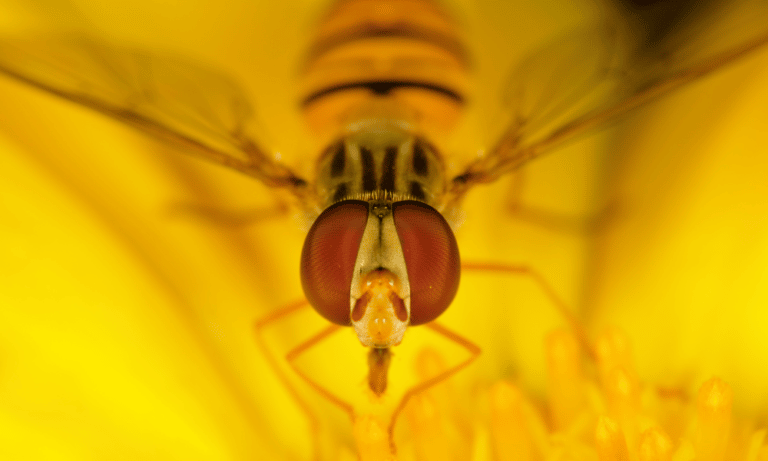 Hoverflies, also known as syrphid flies, and like most flies are from the order of Diptera and live worldwide. This is not surprising as there are around 6,000 different species of these strange-looking little flies.

We often see them hovering in our gardens and may be fooled into thinking they are small wasps, but they are totally harmless to humans.

Hoverflies survive in a wide range of habitats. They lay their eggs in small colonies, choosing places where food is abundant for their larvae. This could be on rotten wood, or even the roots of plants, among other damp crevices.

Don’t worry as they don’t harm the plants. If anything, they are good for them as they are predators of plant and crop pests. Adults are excellent pollinators, showing how important they are to our ecosystem.

To encourage them to lay eggs in your garden, plant blooming flowers for the adult female. Some examples are sunflowers, roses, and even berry bushes. She will seek the nectar and then lay her eggs, hopefully nearby.

The adult female hoverfly lays her eggs in a place that is close to the larvae’s food source. Not all hover fly larvae species feed on bugs; some eat only vegetation. The female will often lay the eggs under leaves, or in root systems underground.

She may also choose to lay them under the bark of a branch in a tree or shrub. For those that do feed on bugs, the eggs will be laid close to an aphid colony.

But no, hoverflies do not build nests that are for living in or laying eggs in. Instead, they will use their environment as a home.

Do Hoverflies Use Wasp or Bee Nests?

A hoverfly is a master of disguise and can often be mistaken for a wasp. This clever little creature uses this to its advantage and sometimes lays its eggs in a wasps’ or bees’ nest.

The larvae will scavenge on dead wasps or even wasp grubs.

A female hoverfly can lay around 100 eggs during its adult lifespan, but she will not lay them all at once. The eggs take a few days to hatch into larvae. They only stay in the larvae stage for around a week. But in the pupae cocoon, they stay safe for up to a couple of weeks.

It’s when they develop wings that they live the longest. As an adult, the hoverfly can live up to a month, but overall, they are quite short-lived.

Despite their short lifespan, they are gardener’s friends. If the eggs have hatched in an aphid infestation, they can demolish up to 80%.

Which Countries Have Hoverflies?

You are unlikely to find hoverflies in a desert or Antarctica. Nor do they like high altitudes.

Their natural habitat is in a comfortable climate, and you’ll find them in gardens, ponds, forests, farmlands, and meadows.

In the UK, there are around 280 species, which can vary as some do migrate. Although bees are often associated with pollinating, hoverflies are also vital pollinators in the UK and are regarded as the 2nd most prolific pollinators.

The Banded Hoverfly is Most Common in the UK

The most common hoverfly species in the UK is the banded hoverfly, which looks very similar to a wasp with a slightly more rounded body.

In Australia, there are around 180 species, with one of the most common genera called the melangyna. One particular species of this genera is called a viridiceps and has an unmistakable black thorax.

A smaller version of this insect grows up to 12mm and is known as the marmalade hoverfly. It lives in Europe, North Asia, and North America.

In warmer climates, it stays out all year round, enjoying urban gardens and anywhere with flower pollen. This tiny creature can sometimes form swarms, which people worryingly mistake for wasp swarms.

In many regions of the world, you can find a hoverfly called The Band Eyed Drone fly (Eristalinus taenlops). Its most striking feature is its striped eyes. This hoverfly sometimes lays its eggs in animal carcasses and also in water.

The larvae are said to resemble an ugly rat-tailed maggot. From its anus, the maggot uses a tubelike breathing apparatus, likened to a snorkel. In very rare cases, the larvae of these hoverflies have been found in the human gut. Nasty, right?

Russia has around 950 varying species of hoverflies living in their fauna. One of their common hornet mimicking hoverflies is the volucella zonaaria. It is one of the larger species that will nest among wasps, without coming to any harm.

In the wasp nest, it eats debris, so it’s doing the wasps a great favour. This type of relationship is known as commensalism, where two organisms work together.

When you next see a hoverfly hovering around, remember that it is a friend and not a foe, so take great care not to harm them.

Hoverflies live in most corners of the globe, from Russia and Europe to North America and Australia. They tend not to build nests, instead, they live within their environment under tree barks, leaves and plant bases.