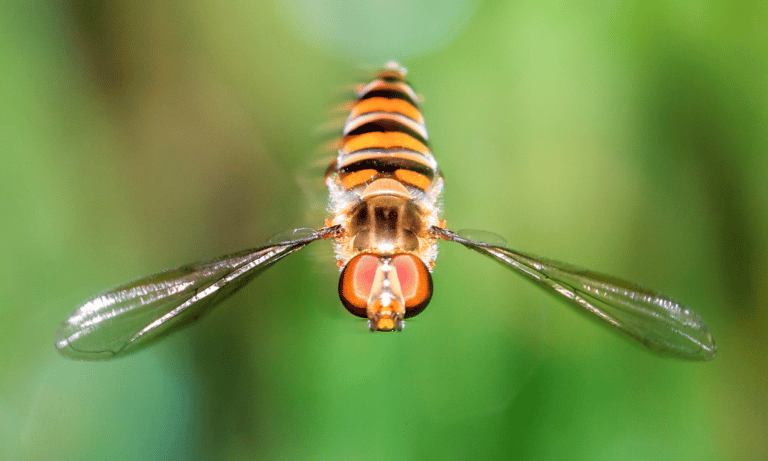 Adult hoverflies feed on nectar. So, one has to wonder why they appear to get so attached to us as we walk around in the summer months. The answer as to why these tiny creatures seemingly follow us around might freak you out a little.

Don’t worry, they have no intention of harming you. They’re only attracted to your perspiration. Insects, like all living things, need their daily dose of salt. As plants don’t provide salt, they can’t get it from them, but they can get it from your sweat.

That might sound gross but it’s an essential part of a hoverfly’s diet. It’s also why insects such as butterflies take part in puddling which involves extracting salt from muddy water and even animal poop!

No need to panic if you have a hoverfly that won’t leave you alone. Despite looking like a wasp or bee, they can’t sting or bite. Instead, they will use their tongue to have a quick intake of salt because a hoverfly needs sodium.

It might tickle a bit as they move around on your body, but try not to squash this amazing little insect, it’s only trying to survive.

The amount it will take from the dampness in your sweat is tiny, so it’s not going to want to stay with you for long.

The hoverfly is an important insect for our natural environment. It not only pollinates, but many of the larvae help keep your garden free of plant pests too.

As an adult with wings, hoverflies need the sweetness of nectar to provide them with enough energy to survive their very short but busy lives. Their entire 4-stage lifespan is around a month, depending on species – the Aspen hoverfly in Canada can live up to a couple of months.

Ultimately, if a hoverfly can obtain salt from something without getting harmed then it will like it. Tears will contain some level of salt but it will be hard to access.

Sweat is far easier to come by on a human body which is why hoverflies will usually opt for sweat over tears.

Should You Be Scared of Hoverflies?

Hoverflies belong to the order of flies (Diptera). If you see a wasp or bee and look closely at them, you will notice that they have 2 pairs of wings. Whereas the hoverfly will only have one pair.

They might look like wasps from afar, but hoverflies are not harmful to humans in the slightest, so you do not need to squish them! What some of them do is pretend to attack a predator in the same way a wasp or bee would with its sting.

But it’s all bluff, in order to protect itself.

You will see lots of them hovering around during the daytime in the summer months, mingling with the butterflies and bees. The males will have emerged first, as they need to mature and get ready to mate.

Many hoverflies are not actually striped. Some boast spots of yellow or brown instead of bands, against a black body. There are even some species that can grow hairs on their bodies so they can disguise themselves as the humble bumble bee.

The hoverfly known as Volucella Bombylans is one such species. It even grows a hairy bottom to show a white or yellow tail end, looking very much like a bee.

Hoverflies are NOT Dangerous

They might look like wasps or bees, but they cannot sting or bite you. Hoverflies are completely harmless. They use mimicry to look like a more threatening insect. The obvious difference is that they hover.

Hoverflies will follow you because they are attracted to your sweat. Sweat can provide hoverflies with much-needed salt that cannot be obtained from plants. A hoverfly will briefly land on you, suck up as much salt as possible and then leave.