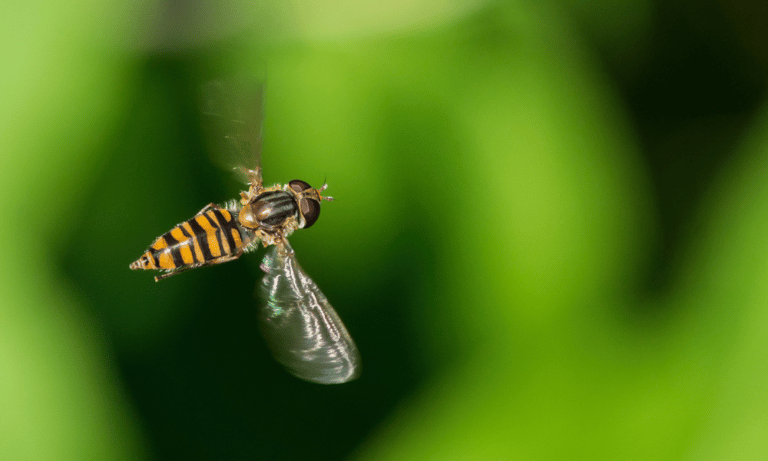 To understand why hoverflies hover, it helps to have a basic knowledge of aerodynamics. There is no easy explanation for how or why a hoverfly hovers, as it’s all a little technical.

In layman’s terms, hoverflies hover because it enables them to easily observe their surroundings and pick out the next flower to grab nectar from. Hovering also allows them to see approaching predators so they can quickly dart off in another direction.

Up until the 1950s, scientists were flummoxed by how hoverflies, and indeed bees, could fly at all, with such tiny wings in comparison to their body size. These insects were breaking all the aerodynamic rules as they understood them at the time.

It wasn’t until the breakthrough on the velocity that it made sense.

The rapid movement of the wings of insects such as bees, drag air towards their bodies. This constant blast of wind gives the insect’s body the lift it needs to move. The excess air supports the insect’s body weight, much like moving in water.

The hovering of a hoverfly is even more unique. You might worry that staying in the same place for so long might cause a risk of predation. But with around 6,000 species of hoverfly, it’s clear their means of flight doesn’t render them in danger of being caught by predators.

So, What’s Going On?

Well… it’s all down to how the hoverfly performs its own aerodynamics.

This tiny creature has adapted and evolved to use its body shape against the winds. Their heads and eyes are larger than the rest of their tiny bodies.

When hovering, the head will stay very still, so they’re likely assessing their environment.

Other flying insects can hover too, but it’s a manoeuvre that’s used before landing. Yet the entire hoverfly’s flight is done by hovering most of the time. When they turn, they seem to dart rather than do a smooth change of direction.

Hovering around doesn’t seem to slow the hoverfly down. They can move up 40km/h and even fly backwards.

With a flight speed of 3.5 metres a second, its wings will beat an average of 120 times per second. All very impressive, especially when they seem to be chasing you around!

It’s taken 300,000 million years for birds and insects to develop their flying skills. A hoverfly floating in mid-air resembles a miniature helicopter, but it only has 2 wings.

There are some helicopters with only 2 blades too, but they also have a smaller rotating propeller at the rear. So, does the hoverfly have some kind of hidden propeller?

Many 2-winged flies have evolved by replacing their second set of wings with a haltere, which was once their hind wings. This little organ is now more of a nodular bump that helps them balance in flight.

Science has even observed that a hoverfly can reorientate itself in only 6 wingbeats. During this manoeuvre, it uses the haltere and its head to stabilise itself. It also uses different strokes and rotations of its 2 wings, which helps the thorax change direction, so its body can hover.

This means each wing can flap at different beats, and in different directions at the same time. It also positions itself using its front and hind legs.

The hoverfly is a unique flyer, often given the title of the helicopter of the insect world.

Yes! Bees might get all the attention when it comes to beneficial insects but hoverflies are nearly as important. They are the second most prolific pollinator you’ll find in your garden!

Do Bees and Wasps Hover?

Instead of hovering, bees and wasps look as if they are bouncing up and down in flight.

They make arc shapes as they keep their eyes on a fixed goal, ie a flowerhead. They need to fly with their body at an angle to keep their goal in the lateral view of their eye.

Ever cheered loudly when you finally get a wasp to leave your home through the door or window, only to have it come back in again? It knows it’s discovered a new route and needs to keep circling until it decides if it’s worth revisiting again for food.

Hoverflies hover because it is an easy way for them to asses the environment around them. They can spot dangers and also look out for sources of nectar. After hovering for a few seconds, they will usually dart off in another direction before hovering yet again.