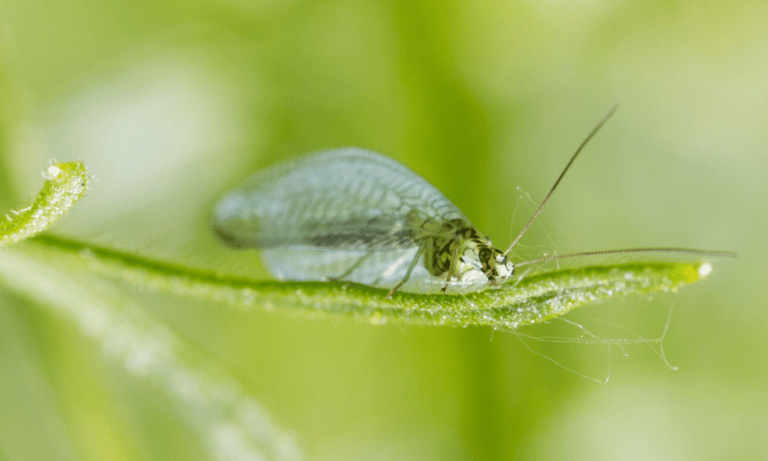 Life can be very hard for certain insects to survive during the winter months, so they hibernate to pass the time and wake up when everything they cannot survive passes away. But are lacewings on of these insects? Do lacewings hibernate?

No, lacewings usually don’t hibernate. The only known lacewing species that hibernate is the green lacewing.

Insects hibernate as winters are too harsh to survive, and the food they eat is usually unavailable.

Even a mild cold atmosphere may be a lot for a tiny insect, so it encloses itself in a chrysalis or cocoon and lays dormant in various places predators cannot reach, such as a leaf pile, dirt, tree hole, or tree branch.

There are a whopping 40 species of lacewings, but only one type of lacewing hibernates, and these are green lacewings.

Lacewings hibernate in piles of leaves, so when cleaning up leaves from a path, simply put them aside and avoid throwing them as there might be a couple of lacewings hibernating.

You can use it as mulch but avoid putting it in a bin as the lacewings wouldn’t be able to come out of it when spring comes.

Where Do Lacewings Hibernate?

Lacewings will hibernate anywhere that is protected from the elements. This could be in cracks in tree bark, piles of leaves or dirt, or under established shrubs.

What is the Life Cycle of a Lacewing?

A lacewing requires 4 stages to be an adult and goes through complete metamorphosis: Egg, larvae, pupa, and adult.

Females that have mated and are well fed lay eggs in a group. The adult female lacewing lays 100-300 eggs during her life span that only lasts for a few weeks.

For two or three weeks, larvae go through three stages, and then they each start to spin a white silken cocoon and enclose themselves in it. The adults come out of the cocoon in 5 days.

Winters are passed in the adult stage or cocoons, depending on the lacewing species. Adults start to disperse after coming out of the cocoons, mate, and start laying eggs.

Adults slowly lose their energy and get less active and may also stop laying eggs and start to change their colours during late fall to winter.

In areas where winters are colder, overwintering usually occurs when the lacewings are in their last stages of pupation, hidden in bark crevices or tree holes protected from the harsh winds and predators.

How Long Do Lacewings Live?

Lacewings don’t live for too long, they hatch in 3-10 days after being laid, and adults live for 3 to 4 weeks after they’ve grown completely enclosed in the cocoon they make for themselves to undergo pupation.

Do Lacewings Hibernate in the Winter?

Some insects hibernate as adults; one such insect is the lacewing. Lacewings have many species, but the common green lacewing is the only type of lacewing that hibernates.

Lacewings hibernate in piles of leaves, so when cleaning leaf litter, put it in the corner of your yard, as mentioned earlier, and avoid putting it in a bin or throwing it away, or else the lacewings could die or get trapped.

Lacewings always select places where they can easily come out of their hibernating areas when the winters are over.

Many animals and insects hibernate in the wild as winters are often difficult to survive for most species because food is little and the weather is extreme.

Lacewings have 40 species, of which only one, the green lacewing, hibernates. Lacewings grow from eggs to adult lacewings through four stages of complete metamorphosis, which involves egg, larvae, pupa, and adult.

Where Do Lacewings Live?

What Do Lacewings Eat?