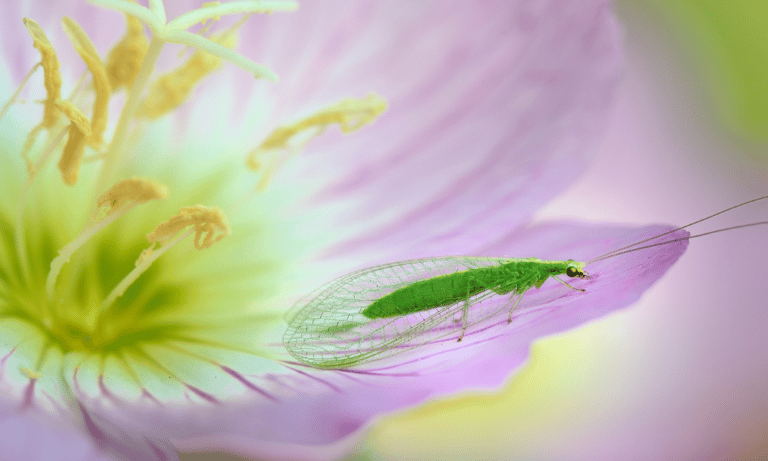 You might see the odd lacewing hopping between your plants, but where have they come from? And where do lacewings live in and around your garden?

The common green lacewing, whether larvae or flying adult, prefers to live in a habitat among nectar-rich plants and fruits. This is the best place for them in their search for sustenance.

The adult female will lay her eggs where the larvae have access to food. That’s usually underneath the leaves of plants, on trees, or even in your garden compost heap.

In the cold winter months, any adult green lacewing that is still alive will hibernate. This is a good thing for any gardener. The more lacewing you have overwintering in your garden, the better.

It increases the chances of ridding your garden of those plant-eating bugs in a natural way.

For this reason, you should treat leaf litter with care. It is a popular area for adult lacewing to snuggle down for the winter. If you put the collected leaf litter into an enclosed compost bin, the lacewings will be trapped and die.

They may seek damp crevices too, but mostly prefer to hibernate in greenery such as evergreens and ivy.

The adult lacewing doesn’t physically build a nest, as in the sense that a bird does. They will seek to lay a batch of eggs where they know there is food for the larvae.

The green, adult female lacewing can live up to 40 days and in that time will lay up to 30 eggs a day. She can lay up to 600 eggs in total in her lifetime, so she is a very busy little insect.

Because the larvae may eat each other as they hatch, she will lay individual eggs at the end of a silky thread of hardened mucus. Once the egg hatches, the larvae are not fussy about what they eat, so long as the food is soft-bodied.

The brown, female, adult lacewing attaches her eggs directly onto a leaf, using a sticky substance that she produces.

Both brown and green adult lacewings can smell out infestations of soft-bodied bugs, such as aphids.

This is an important attribute as it helps them to find the perfect place to lay eggs as they know that food is available for the hatching larvae.

Which Countries Have Lacewings?

Lacewing flies are part of the Neuroptera order of insects. This category is broken down even further into order, family, genus, species, and even sub-species. It’s essential to understand this, as different species live in differing climes.

You will never see ALL of them in one place, as each species has adapted to its environment. Worldwide there are around 5,000 species of lacewing, most of them practising similar habits.

Of the green lacewing alone, which is of the Chrysopidae family, there are around 85 genera.

This is further categorised into around 2,000 species. Only a specialist could know all the species, which is why we tend to refer to the insect as green or brown lacewing.

In the UK alone, there are around 18 species of green and 29 species of brown lacewing. Yet the green is still the most popular that you will see in gardens, parks, and meadows.

However, they are not as prevalent in Scotland because of the colder clime.

Australia boasts around 600 species of Neuroptera, with the largest group being of antlions of around 250 species. But learning which lacewing belongs in which subgroup species can be confusing.

For instance, in Australia, there is a newly discovered species of Neuroptera, known as the Stilbortergidae. Sub-species can hop from one genus to another as they evolve but still share specific characteristics.

The Stilbortergidae share features with another species of Neuroptera known as Ascalaphidae. Both species have clubbed antennae, they share specific cells, and flight behaviour patterns.

Some scientists classify the Stilbortergidae as part of the Ascalaphidae family. Others prefer to separate them both as two subspecies family groups, giving us an idea of how confusing it can be to label them.

Lacewing will populate certain countries based on how prone they are to the changes in climate.

Recent studies have shown how this happens. The green species called Zastrowi was popular in African and Asian regions. Due to the continual droughts, the species have migrated to southern American regions.

This shows how even the tiniest of creatures in our world are being affected by climate change.

Lacewing, as with many other insects, can move around within their species groups as they migrate. But it changes their behaviour as they adjust to their new environment.

In South Asia, there is even a species of nymphalid (lacewing) that is a butterfly, from the order of Lepidoptera. Its common name is the Tamil lacewing. With so many species of lacewing, it’s no surprise that there are so many variations.

Lacewings will usually live near to nectar-rich flowers as this will provide plenty of food for them. They will also live near a source of aphids which their larvae will enjoy eating.

How Can You Use Lacewings for Pest Control?

What Do Lacewings Eat?