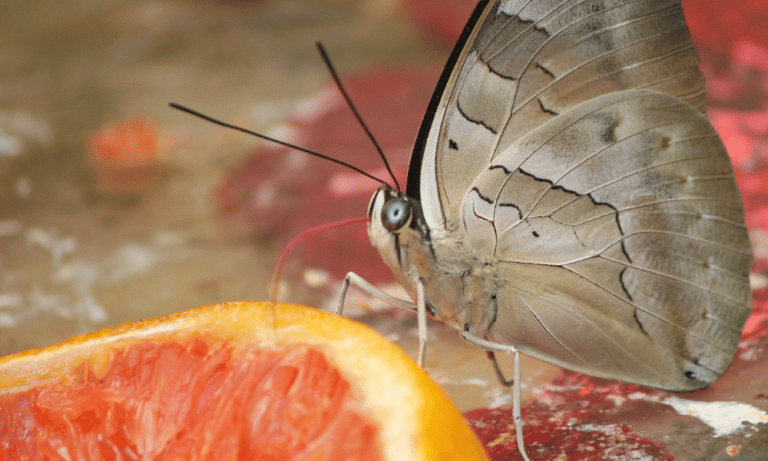 First, let’s establish the titled categories of meat and plant eaters to understand what a herbivore is.

A herbivore eats only plants and vegetation.
A carnivore eats mostly meat.
An omnivore can eat both vegetation and meat, such as humans do.

From this, we can establish that humans are omnivores. Most animals, such as lions, are carnivores. And most insects are herbivores. But, are butterflies herbivores or omnivores?

Butterflies are herbivores. Their diet consists predominantly of nectar and other sugary substances such as juice from rotting fruit. They will also consume liquid from puddles and animal faeces.

An adult butterfly does not have teeth to chew food. Instead, it will use a tube-like tongue known as a proboscis. This organ allows them to suck on nectar and other sweet liquids that plants and fruits produce.

The sweet sugar from the nectar is turned into energy, which gives them flight. Though they also need to have a specific body temperature for flight too.

Most butterflies are not fussy about the plant they take the nectar from, but some will only feed from specific vegetation.

The huckleberry butterfly is one such species, feeding only on tree sap. Though it cannot get to the sap without the help of birds and other animals that remove the bark for their own purposes.

Some butterflies can hibernate in cold spells. To ensure they survive their extended sleep, they will eat lots of sugary substances during the autumn months before going to roost.

Yes, most caterpillars are herbivores. However, if they are desperate for food, then they can become cannibals, eating their own!

Although we have established that butterflies are not carnivores, one species could fall under this category.

The harvester butterfly can be found in North America, and the larvae feed on aphids. As they develop into adult butterflies with wings, they have a shorter proboscis than other butterflies.

This is because the adult does not feed on plant nectar but on the honeydew that aphids excrete.

The harvester will not be found so much in pretty meadows and gardens, as other butterflies are. It is more likely to be fluttering around a dung pile.

Their primary habitat is in wooded areas or near running water. This butterfly is still a part of the order of Lepidoptera, as are all butterflies, but it is of the genus Feniseca Tarquinius.

Butterflies are further broken down into families, genomes, and species. This method allows us to understand how each butterfly behaves differently.

Butterflies have many predators, such as birds, ants and wasps. Recent studies, in 2019, have shown strange behaviour in one particular species of butterfly, indicating that it does practice cannibalistic behaviour.

The milkweed butterfly is from the family Nymphalidae and the genus Danaus. This family also includes the popularly known monarch butterfly.

During the caterpillar stage, milkweeds will feed on the chemicals of a toxic plant called after its namesake, milkweed. These butterflies have bright colours, which are produced from the toxins they eat.

Such colouring also warns predators that they are poisonous. The chemical can also be used in other ways, such as helping the male find a mate. Because of the competition to mate, they have another trick that increases their chances of getting noticed by the females.

By boosting their chemical aroma, they will be more attractive to the ladies.

But to smell good for the female, they will need to practice some brutal methods. Using the sharp claws on their feet, they scratch at the bodies of vulnerable caterpillars.

This is followed by using their proboscis (tongue) to poison the caterpillar, which in turn liquidises its organs. The male milkweed will then devour the caterpillar’s soft body.

They are only eating the caterpillar for its toxins and not for food. It is believed that this behaviour is a means of increasing their chemical aroma.

This is a newly discovered behaviour of stealing other insects’ chemicals. Scientists have named it, kleptopharmacophagy.

The milkweed butterfly is also known to feed on the carcasses of other insects, such as grasshoppers. But it will only feed carcasses from insects that contain the chemicals they seek, to increase their chance of reproduction.

The only butterflies you could justify being classified as omnivores are those from the milkweed group.

As adults, with developed wings, their primary food source is the poisonous sap of leaves. So why do we categorise them as omnivores?

But the female milkweed will only eat leaves that contain the chemical pyrrolizidine alkaloids. So, it’s fair to say that butterflies are generally not omnivores.

While using their proboscis tube-like tongue to suck on nectar, they will also collect pollen on their bodies. As with other pollinators, this is then distributed to other plants they visit. Hence their importance as pollinators.

What Do Butterflies Eat?

Butterflies tend to eat mainly nectar from flowers but can also be found consuming rotting fruit if they need sugar or puddles if they need something salty.

Butterflies are herbivores. They consume a diet mainly consisting of nectar from plants and other sugary or salty substances which can be obtained from fruit, puddles and even animal excrement. Butterflies are not known to consume other animals.