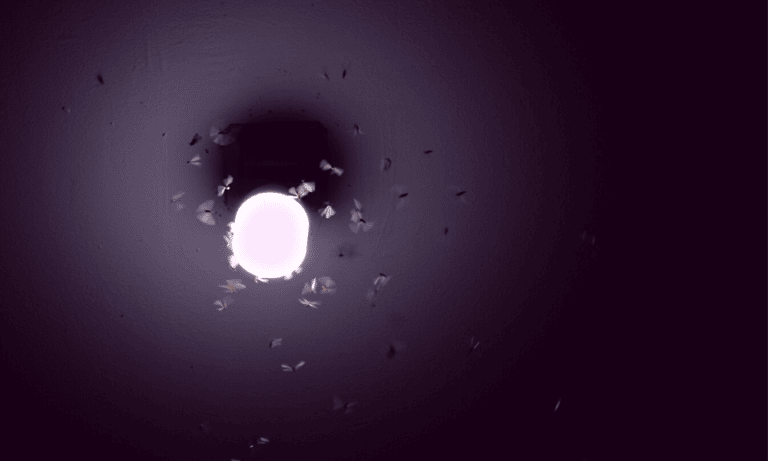 Moths are one of the most well-known nocturnal insects that you may also notice flying frantically around streetlights or lamps in your home. However, there was once a time in human existence when there were no lights. So, what did moths do before light was invented?

Before lights, moths would navigate home using moonlight. Unfortunately, outdoor lights often lead to moths losing their bearings as there are now so many light sources to contend with.

Moonlight would help moths find their way home by helping them to navigate. Moths would fly at a specific angle to the moonlight to navigate properly.

It is believed that they do this in an attempt to reach it.

However, since that is impossible, it eventually became a point of navigating for a moth. One can also say that what the northern star was to humans, the moon was to moths.

However, with the advent of streetlights and bulbs, moths get very confused, which is why you may often find them stumbling into your porch. This is one of the reasons why moths are often seen circling bulbs and lamps.

Why are Moths Obsessed with Light?

To understand why moths are drawn toward the light, we need to understand phototaxis (you can learn more about it here).

It is a phenomenon which makes many insects, including moths, move in response to light. This movement can either be away or towards the light source. Since you notice moths going towards the light, it indicates that they are, what is known as, positively phototactic.

One of the reasons for a moth’s obsession with light can adhere to the fact that they are phototactic.

Another reason people believe that moths are obsessed with lights is that a moth’s eyes are comprised of light sensors, just like the human eye. These sensors adjust independently depending on the light they detect and are exposed to.

When moths are exposed to very bright lights, the facets of the focus lens are channelled towards its sensors. This is why they adapt more slowly to dark than light.

Therefore, moths have difficulty leaving bright lights because getting back into the dark makes them blind for some time, making us think they are obsessed with bright lights.

Lastly, another factor contributing to a moth’s attraction to lights is that a moth’s eye is sensitive to certain light wavelengths, such as ultraviolet rays. This sensitivity makes moths very responsive to lights.

What Lights Attract Moths the Most?

Any bright lights or those that have a shorter wavelength (such as ultraviolet light) will entice the greatest array of moth species. Ultimately, any form of light (including a flame) will attract some moths.

What Other Insects are Obsessed With Light?

Any flying insect that has a positive phototaxis will be attracted to lights. This can include many small flies, midges, beetles and mayflies.

Why Do Moths Fly Around Lights?

Artificial lights confuse moths. Moths are used to using the moon to navigate. They can fly towards the moon at a certain angle but never reach the moon. This helps them to find its way around.

However, a light on your porch or a streetlight can easily be reached by a moth. The next thing they know, the light is behind them so they do a 180 and start flying back towards it. This repetitive motion of flying back and forth to the light causes them to fly around in circles.

Are Moths Attracted to Candle Lights?

Yes, moths are extremely attracted to candlelight. Moths’ fatal obsession with the candle flame has long been a point of discussion by scientists and writers for many years, also giving birth to the famous saying, “like a moth to an open flame.’’

The reason for this is the unusual behaviour of moths, where they fly right into the candle flame and, most of the time, kill themselves.

However, a moth is attracted to the flame which it initially uses for navigation. Unfortunately, it disorients them, just like bulbs or other bright objects do. This is the reason why they end up burning themselves by candle flames.

Why Do Moths Fly Into Fire?

Moths are known for flying into a fire and burning themselves, just as they do with candle flames.

Scientists believe that when a light source is a distant object such as the moon or the sun, the incoming rays of the light strike in a parallel manner. This has conditioned moths into receiving light rays in only certain parts of their eye.

However, when the light comes in from a nearby source, it doesn’t strike in a parallel manner. Rather it comes straight in. Moths act upon their conditioning and try to hold the light ray at an angle.

However, they end up spiralling towards the light source and, ultimately, ending up in flames.

Another theory that explains a moth’s attraction to fire is that flames emit ultraviolet rays that attract moths. Since many flowers also have ultraviolet patches, moths tend to confuse the two and follow the UV rays emitted by candle flames.

Before the advent of light bulbs and street lamps, moths would navigate via moonlight. However, it may seem that moths are using moonlight as a means of navigation, but the truth is that they are trying to reach the moon and get disoriented due to moonlight.

One may notice them frantically flying towards the moon or any other glowing object. This is why many believe that moths are obsessed with lights.

This is because moths are positively phototactic, which is why they naturally move in the light’s direction.

Another reason is that their eyes contain light sensors, which, when exposed to bright lights, increase the light sensitivity making it hard for moths to fly away from the glowing object.

Similar is the case with candles, where candle flames highly disorient moths’ navigation.

Do Moths Lay Eggs In Your Ears?

Do Moths Have Nests?

Why Do Moths Turn to Dust?