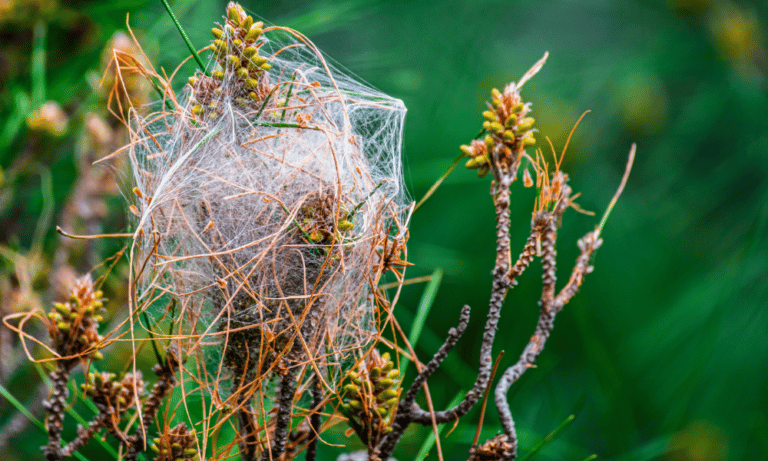 At night, you might see a handful of moths flying around your garden, pollinating your plants. But during the day, they seemingly disappear. However, this makes one wonder where do moths reside? And most importantly, like most insects, do moths have nests?

No, generally moths do not have nests. Some species do, however, build nest-like structures for their larvae.

Moths are usually on the go and constantly move from place to place, searching for shelter and food. During their life cycle, moths have different phases. One of them is the pupal stage.

The closest that you can find a moth to building a nest is when they’re in the pupal stage. During this stage, moths build cocoons to protect themselves from metamorphosis. Many moths can also come together to create a colony that looks like a nest.

The closest that you’ll find moths nesting is while they’re building their cocoons. The cocoons are built when moths are still caterpillars. They build the cocoons by spinning and wrapping silk all around their body.

Certain moth types build their cocoons earlier during the larval stage, with an opening available at the top that makes accessing food easy. This opening closes when the cocoon attaches itself to a branch, leaf, or twig.

Cocoons generally have an oval shape, and their shape is smaller from the side attached to the branch and grows gradually to the other end. In addition, during the early stages, cocoons are white in colour and change to brown gradually.

Where Do Moths Live?

You will find moths all across the globe and in every climate. From sea shores to mountains, moths can be found. Wherever there is a plant that a caterpillar can eat, you will find a moth there.

This is because there are over 160,000 different species of moth, and many are said to still be undiscovered. Therefore, each species of moth is unique and requires a different climate and weather condition to survive.

You will usually find moths living near plants that they deem food. Since different kind of moths eats different food plants and their parts, there is no one place where a moth can be found living.

Do Moths Live In Groups?

Most moths are solitary insects and, therefore, do not live in groups.

Do Moths Live In Walls?

Moths won’t actively seek out cavities to live in. However, if they find a gap in your wall then they will live in the wall as it’s dark. Moths will live anywhere that is dark and safe from predators.

Where Do Moths Go During the Day?

The majority of moth species are nocturnal. This means that they fly during nighttime and sleep throughout the day.

Since moths lack teeth and do not have any significant means of protecting themselves from predators, nature has made the majority of the moths nocturnal to avoid any potential contact from predators.

Nocturnal moths find a dark place to reside and sleep during the day and only come out when it’s nighttime.

This may sound contradictory to the famous notion that moths are attracted to lights which is why they are found near streetlights. However, the truth is that moths naturally tend to go sideways towards a light ray, so you will notice them circling the light often at night.

However, certain species of moths aren’t nocturnal as they don’t sleep during the day. Such moths are referred to as diurnal moths. These moths usually hail from the Uraniidae, Arctiidae, and Agaristidae groups.

The day-flying moths usually spend their days looking for food, and since they’re active during the day, they are exposed to sunlight which gives them more energy to look for food.

However, being active during the day without any proper defence mechanism also leaves these moths susceptible to many predatory attacks. This is why diurnal moths rarely come out and tend to find a dark spot somewhere to hide from predators looming outside.

Moths are beautifully unique creatures that maintain a very distinct lifestyle. Unlike many other insects, moths do not have a nest as they never build one due to the unique demands of their lifestyle.

The cocoon that a moth caterpillar makes during its pupal or larval stage is the nearest a moth ever gets to building a nest in its life cycle. In addition, at many points in their life, groups of moths come together to form colonies which often takes the form of nests.

Other than that, moths do not make the conscious effort to build a nest for themselves like other insects.