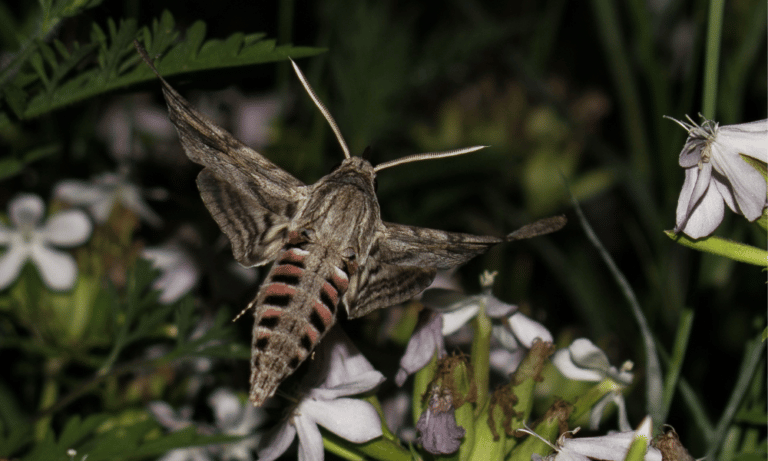 You will rarely notice moths during the daytime which is why many people assume that moths are nocturnal. But is this actually the case? Are all moths nocturnal or do some come out during the day too?

Yes, most moths are nocturnal. However, there are some moths that are diurnal or crepuscular.

Moths belong to the category of insects that are, generally, inactive during the daytime. However, you might notice a few of them during the day (diurnal) and some during twilight (crepuscular).

Moths can easily become disturbed during the daytime which can cause them to wake up and fly around. For example, if they’ve taken shelter in a plant to sleep during the day and you then start pruning it, then the moth will wake up.

When they sleep, they don’t hibernate or become unconscious, they simply sleep as a human would which is why it’s easy for them to wake up.

Do Some Moths Come Out in the Day?

Another species of moth that is not nocturnal is known as crepuscular. Crepuscular moths sleep all other times except for dusk and dawn.

Hemaris moths, also known as hummingbird moths, are the most well-known diurnal moths, especially in the US. Diurnal moths have three receptor types sensitive to three different lights: Blue, green, and ultraviolet.

Contrary to popular belief, the number of diurnal moths in the ecosystem is not very small. There are many moth species that, even though they aren’t day-flying months, are still active during the day compared to nighttime. For instance, the male species of the emperor and fox moth.

Do Moths Prefer the Night?

Yes, moths tend to prefer the nighttime. Since moths have no fangs that could deter predators, they are highly susceptible to attacks by birds. This is why even the diurnal and crepuscular moths tend to rush towards dark spots after they’ve fed.

In addition, there is also very little competition for food during the night. The majority of the insects are asleep.

Bright lights tend to confuse the navigation system of moths, especially nocturnal ones. This is why they travel using moonlight. This is why many people think that most nocturnal moths are drawn to light (phototaxis).

However, many species of nocturnal moths are repelled by it.

When Do Moths Sleep?

Since most moths are nocturnal, they sleep like all other nocturnal creatures during the day.

The statement that moths sleep during the day and are active during the night is very general. This is because there are certain time periods during which each moth type remains active.

For instance, the gypsy moth is highly active from 11 am to 1 am, and flies from 1 am to 3 am. Similarly, black arches fly from 3 am to 5 am. However, most moth types are found active from midnight to 1 am, which means they tend to fall asleep as morning approaches.

As discussed earlier, not all moths are nocturnal, as some are diurnal and crepuscular.

Furthermore, even though diurnal moths are asleep during the night and active during the day, you will not usually find them in your vicinity. Rather you’ll spot them in dark corners as they hide themselves to protect themselves from predators.

Where Do Moths Sleep?

Moths are generally not fond of light, even diurnal or crepuscular. Thus, you will rarely spot them in crowded areas. Even during the day, moths tend to hide in dark places. Some common locations moths can be found to sleep or hide from predators include attics, basements, closets, and dark rooms.

Moths do not build nests nor do they sleep in purpose-made homes. Instead, they simply sleep in a dark, sheltered spot in plants.

In a nutshell, yes, the majority of moths are nocturnal. Thus, most of them prefer the dark and tend to search for food during nighttime and sleep during the day.

Since nature hasn’t blessed moths with a very powerful defence system, it has ingrained in them a likeness for the dark, enabling them to protect themselves from getting eaten up. In addition, moths also have an easier time searching for food during nighttime due to less competition.

However, this doesn’t mean that all moths are nocturnal. Many sleep during the night and look for food during the daytime. Certain moth species are active during twilights.