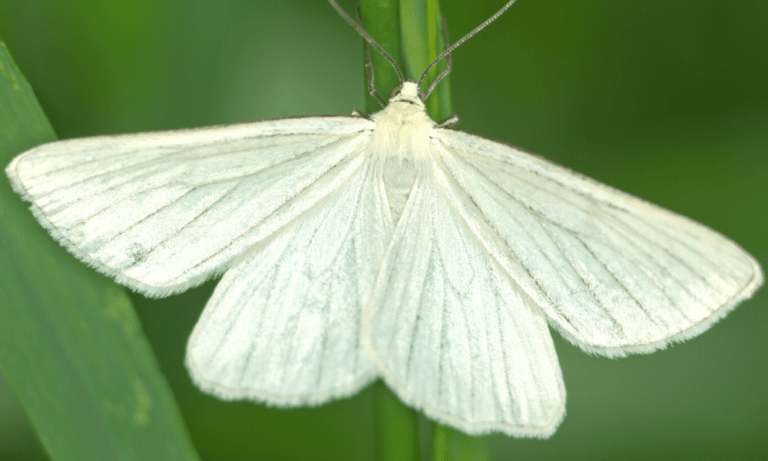 You may have seen a white moth in the garden, but these aren’t albino moths. Albino moths lack any pigment that adds colour to their hair, skin and eyes. But are albino moths rare, common or non-existent?

It is incredibly rare to witness an albino moth. However, species of white moths are very common.

White moths are simply white by colour, while albino moths are white due to a complete lack of colour. Albinism is a genetic condition in which the body cannot produce pigment.

You can tell the difference between a white and albino moth by looking at its eyes and mouthpiece. Without any pigment, these organs would appear white or even clear.

What’s the Difference Between an Albino Moth and a White Moth?

A white moth is a species of moth that is naturally coloured white. They can be all white or white with other colours mixed in. Commonly, white moths have darker greys or even black areas on their legs, wings, or face.

An albino moth is a moth of any coloured species, including white, that cannot create pigment. These moths are white because their bodies cannot produce any other colours.

The entire moth will be white, from its hair to its skin, its mouthpiece, and often its eyes.

Albino moths are incredibly rare, so if you are wondering if the moth you are looking at is white or an albino moth, it is most likely just a white moth.

You can check to see if you see any other colours or variations on the moth. If you cannot see any other pigments or tinges of colour, you may be experiencing a very rare albino moth. Lucky you!

What is the Difference Between Moths and Butterflies?

Moths can look like butterflies and are sometimes mistaken for other winged species. Since they both fly and look similar in body design, it can be hard to tell them apart.

Some moths are even patterned on their wings, similar to how you would expect a butterfly to be. A few key differences, though, help make telling them apart easier.

For starters, butterflies are much more vibrant in colour than moths. From the bold orange and black of a monarch butterfly to the sapphire blue wings of a few different species, butterflies are known for putting on a fantastic display of nature’s best colours.

Moths, on the other hand, tend to be drabber. They present in colours that are more muted and more commonly found in wooded areas. Many moths are white, cream, or black and usually have a combination of a few of the colours.

Even with such a wide variety of wing sizes, butterflies tend to be much larger than many species of moths.

Moths are much smaller than most butterfly species. Moths tend to have wingspans that vary between an inch and a few inches.

Butterflies rely heavily upon the sun and its warmth to fly. They cannot fly well in colder weather and often need to rest and warm their wings. Because of this, it is rare to see a butterfly flying at night.

Moths are the opposite.

They tend to rest during the day and emerge at night. Moths spend their days resting in wooded areas before looking for food at night.

Like their butterfly cousins, moths like heat. The only difference is that moths can generate heat themselves with their wings.

What Species of Moth are White?

There are many species of white moths.

Almost all moth species have at least some white on their bodies, wings, or antennas. Telling the different species can be incredibly difficult, especially if unfamiliar with them.

They are all white except for some black markings on their legs. This moth is considered to be incredibly dangerous to trees and ecosystems. It can take out entire forests and groves of aspen, cottonwood, and willow trees.

The larvae will feed on the leaves of these trees and rapidly destroy them.

Scientists say that the last major outbreak of these moths was in 2013, but homeowners should always be aware that the danger exists and watch their trees closely for any signs of infestation.

These moths are native to California, Nevada, and Utah.

In England, Wales, Scotland, and Ireland, beautiful white moths with black speckles can be found in woodlands and prairies.

The colouring ranges from white to cream, and the number of black speckles varies from moth to moth.

These moths are not pure white, but they still present majority white. They are medium-sized and quite common to find.

They lack any speckles, lines, tinges, or spots of any other colour. While it may seem strange that you would not consider this moth to be albino, it is because this species is known for its white colour.

It is not white due to a genetic disorder that prevents pigmentation.

This moth is considered to be incredibly beautiful to see. It has a white fringe that hangs over its wing line and emerges when other moths would find it too cold.

Since the moth can take flight in late March or early April, it is not uncommon to see these moths when there is still snow and ice on the ground.

No, white moths are not rare at all. Chances are, you’ve seen a white moth in the garden. It is albino moths which are incredibly rare.

Do you have further questions about the existence of albino moths? Then give these FAQs a read:

What Does Seeing a White Moth Mean?

Different moths have different meanings in spirituality. Seeing a white moth is said to represent good news in a bad time. The night is a bad time, but the moth’s white is a glimmer of hope.

Yes, albino butterflies do exist but, like moths, they are rare and not something you’re likely to ever see.