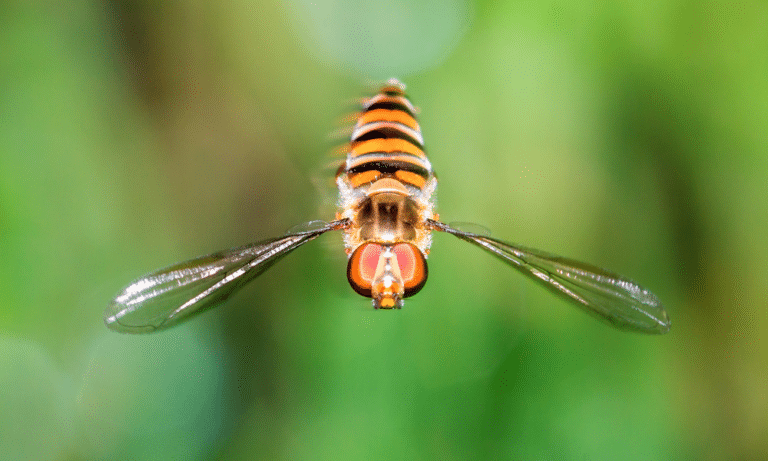 Hoverflies might have the word hover in them but this can often be misleading when it comes to insects. So, do hoverflies hover or is this just another confusing name in the animal kingdom?

Yes, hoverflies do hover. This is where they get their name from. This is one of the easiest ways to tell a hoverfly from other flying insects such as wasps.

Hoverflies are yellow and black insects that hang out near flowers. They are often confused with bees and wasps. This is due to their similar colouring and activities. Bees and wasps are pollinating insects, as are hoverflies. So how can you tell hoverflies from bees or wasps?

The answer lies in the body shape and flight patterns of these insects. Hoverflies are known for their ability to seemingly hover in place like a helicopter before zooming off in any direction. But there’s more to it:

How To Identify a Hoverfly

When you see a black and yellow patterned insect hanging around your flower garden, you may wonder if it is a bee, wasp, or hoverfly. Each insect has their own unique body shape and it is easy to tell them apart once you know what to look for.

To identify a hoverfly, check for the following:

What Flies Can Hover?

Hoverflies are known for their ability to hover in place. This interesting flying pattern is unique to hoverflies and gives them their name. There are over 6,000 species of hoverflies and they can be found all over the globe.

One way to tell a bee, wasp, and hoverfly apart is to watch their flight pattern. If the insect seems to be hovering, it is most likely a hoverfly.

Can Bees and Wasps Hover Too?

No, bees and wasps cannot hover. Hovering is a flight pattern unique to hoverflies. Bees and wasps may bob around and may seem to be still at moments, but they cannot truly hover in one place.

Bees are known to swarm. This unique flight pattern is specific to bees and usually happens when the queen dies in their hive or if their hive has been destroyed.

The bees are looking for a new home and tend to stick together in large numbers when doing so. If you notice a swarm of bees or a beehive in your area you want to be removed, call your local beekeepers. They will safely remove and relocate the bees to an optimal environment.

Do Hoverflies Live in Wasp Nests?

Some hoverflies do live in wasp nests. Hoverflies have mastered the art of disguise and will often take on the personas of other more dangerous insects. Hoverflies have no stingers nor do they bite, so they have little to defend themselves from predators with.

Even if some hoverflies have laid eggs in a wasp nest, if the nest is close to or in your home, you will want to remove it. Wasps are dangerous and can even cause death if someone is allergic.

Wasps only use their nests for one season. As the cold comes in, all the worker wasps will die off and the queen will go into hibernation before venturing out in the spring to start a new nest. The best way to prevent a wasp infestation is to prevent a queen from making a new nest in the springtime.

Bees, wasps, and hoverflies are all unique insects, despite often being confused for one another. A great way to tell them all apart is by their flight patterns. A hoverfly has the unique ability to hover in midair in one place. Hoverflies also have a V-shape wing pattern when at rest, whereas bees’ and wasps’ wings lay flat on their backs.

Bees and wasps also both have stingers, whereas hoverflies do not. Due to this, Hoverflies often take up home amongst bees or wasps for protection. A hoverfly may lay eggs in a wasp nest to protect itself from predators.

If you need to remove a wasp nest or beehive, it is best to call your local beekeeper or exterminator. Bees and wasps can be dangerous if provoked and will defend their homes and queens until death.