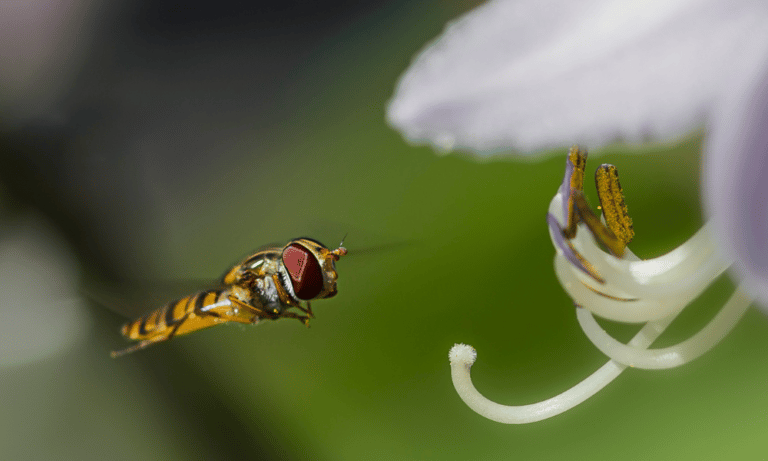 Hoverflies are known for their uncanny ability to pull off the looks and lifestyles of other insects. Hoverflies mainly imitate wasps and bees in their appearance, habits, and even noises. So, do hoverflies buzz too?

Yes, hoverflies can buzz like a bee or even emit the sound of an angry wasp if cornered by predators. These insects have truly taken the role play to the next level.

Since hoverflies lack stingers, they try to fit in with these other insects that have them. Thus, mimicking everything from colouring to noises is an important part of their defence.

What Noises Do Hoverflies Make?

Hoverflies are the masters of disguise. They do not take their ability to play the role of a wasp or bee lightly. They have worked over generations to get their colours and behaviours right. It would be silly to think they did not learn the language!

Hoverflies can mimic the noises that many other species of wasps and bees can make. They can buzz like a bee or scream like an angry wasp if they feel in danger.

Since they cannot sting like bees or wasps, they need to be very efficient at tricking other predators into thinking they are. Sometimes, looks just aren’t enough!

Do All Hoverflies Make Noises?

There are a lot of species of hoverflies and different hoverflies will make different noises. The Syrphus Ribesii hoverflies are known to make particularly prominent buzzing when flying. 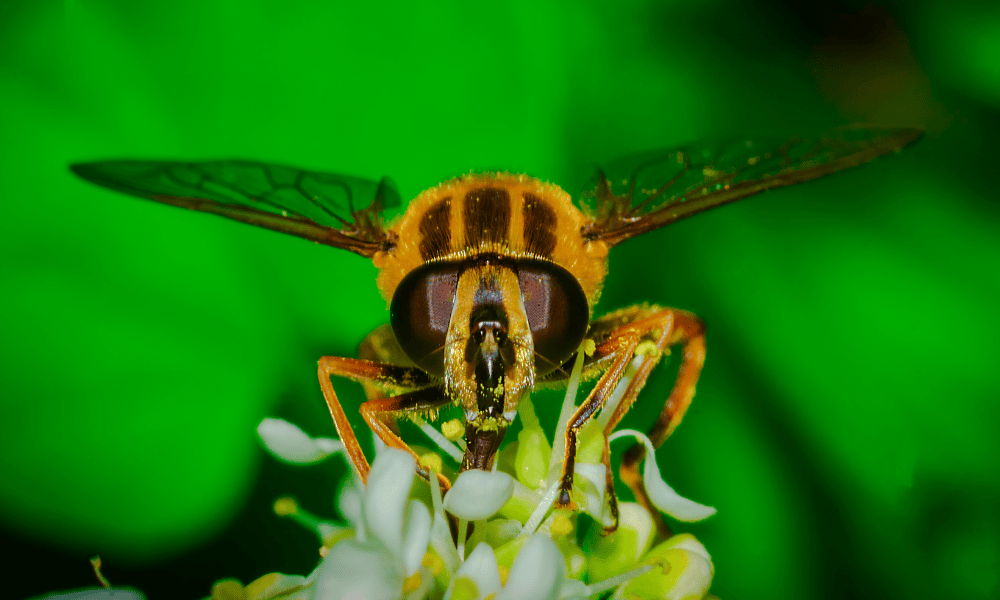 What Similarities Do Hoverflies Have with Bees?

Hoverflies have a lot in common with bees. This is mainly because hoverflies have slowly taken on the identity of both bees and wasps to blend in seamlessly with them.

There are about 6,000 species of hoverflies, and almost every single one has attempted to take on a new identity. The hoverflies that look like bees truly look like bees.

Often, the hoverflies can live amongst bees in a hive and have the bees be none the wiser.

Since hoverflies live and work amongst bees, it only makes sense that they would have taken on many parts of the bee’s identity.

Many species of hoverflies look almost identical to bees, so much so that it is nearly impossible to tell them apart at first glance. They have roughly the same body shape and colouring, and both fly from flower to flower, collecting nectar.

Hoverflies also buzz like bees. Bees use their vibrations (or buzzing) as a way of communication. While hoverflies cannot mimic every part of the bee language, they know enough not to be suspicious.

Another thing that bees and hoverflies have in common is that both of these insects lay eggs. In honeybees, only the queen bee lays eggs while the worker bees tend to her and the new young.

Almost all species of female hoverflies lay eggs themselves and do not have the same social structure.

What Differences Do Hoverflies Have with Bees?

Even with all the similarities between bees and hoverflies, there are plenty of differences. They are different species, after all!

Some of the small details in their physical appearance and habits give their true identities away. These tiny things allow us to tell if we are dealing with a hoverfly or a bee, which can help alleviate some stress.

Many people are afraid of, or at least cautious of, bees because they can sting. While bees tend to be docile and peaceful insects that keep to themselves, the sharp and intense pain of a bee sting is something that will be remembered.

Even if you are not allergic to it, bee stings can leave a lasting memory!

Hoverflies have no stingers at all. If you are watching a hoverfly on a flower, there is no need to be wary or stay too far back. These insects have no way to sting or bite you, so rest assured that there is no immediate danger.

While that hoverfly is on the flower, it will be pollinating it and consuming nectar, similar to bees. However, the hoverfly will not collect pollen to return to the hive. Hoverflies cannot make honey from pollen.

In fact, no other bee can, except for the honey bee!

As the hoverfly is buzzing around, take a look at its wings. Hoverflies only have two wings or one pair. These wings lay in a V shape when the hoverfly is at rest, similar to the way a housefly looks.

Bees have two sets of wings or 4 individual ones. They also will lay flat against their back at rest.

If you are close enough to see the eyes of the hoverfly, you will notice that their eyes still look like fly eyes.

They are round and a bit bulgy. Bees do not have eyes like flies.

In fact, bees have 5 eyes! They have two compound eyes on their face and three “eyes” on their head that only sense light. They use these eyes to fly and always know which way is up!

Do Hoverflies and Wasps Have Similarities?

Yes, hoverflies can also look like wasps with slim and slender bodies. The big difference will be that the body’s shape is rounded at the tip, as hoverflies do not have a stinger like a wasp.

Hoverflies and bees have a lot in common. Even more than just appearance, hoverflies have also learned to mimic the sounds that wasps and bees make to help themselves blend in and ward off predators.

Hoverflies can buzz like a bee or even scream like an angry wasp. They can vibrate and send warning signals if caught in the beak of a bird, similar to the way a wasp would.