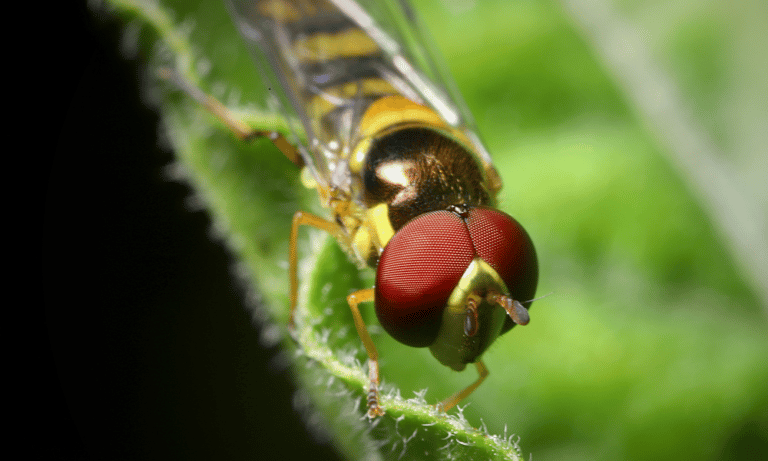 Hoverflies look a lot like bees and wasps. They are yellow and black and fly around pollinating flowers, so it’s only fair that they get confused with the company they keep. But do hoverflies bite and sting or are they harmless?

No, hoverflies cannot bite you. They are harmless other than the annoyance they can cause by buzzing around you. Even though they look like bees and wasps, they have no stingers or way of biting you.

Hoverflies are incredibly beneficial as they are pollinators as adults. Like bees and butterflies, hoverflies eat the nectar from flowers as a main source of food.

However, even the larvae of hoverflies are beneficial. In this stage, hoverflies will eat aphids which are pests that can destroy plants and crops quickly.

Can Hoverflies Hurt You?

Hoverflies sometimes get a bad reputation for mimicking bees and wasps. They also do not get enough publicity amongst the general public to know and understand this beneficial and unique insect.

Since most people see a yellow and black flying insect near flowering plants, they immediately assume they are in danger of being stung, it only makes sense that humans would be wary of hoverflies.

The good news is that hoverflies are completely harmless!

They do not have a stinger and are incapable of biting. The adult hoverflies will help pollinate your flowers, and the larvae hoverflies will control your garden’s aphid population.

Do Hoverflies Have a Stinger?

Although hoverflies mimic wasps, the one noticeable difference when you look closely is that they do not have stringers. You’ll notice that the end of their body is rounded, whereas a wasp has a sharp stinger.

Hoverflies do not have a stinger and do not bite, meaning they lack a way to defend themselves from predators. Since they cannot physically defend themselves, hoverflies have taken on the identities of bigger and scarier insects.

It is no coincidence that hoverflies tend to look like bees and wasps. This is an intentional disguise to trick predators.

By blending in with colonies of bees or nests of wasps, they are offered protection from other predators.

Other insects and animals do not mess with hoverflies over fear of being stung by what they assume the hoverfly is (a wasp or a bee).

The disguises are very well done, so much so that even experienced gardeners can have a hard time telling them apart at first glance!

Are Hoverflies a Type of Wasp?

No, while hoverflies may look like a type of wasp, hoverflies are their own species. They are related to common flies and take some of their characteristics. Hoverflies are masters of disguise and, through evolution, have adapted their appearance to fit in with their wasp companions

How Can I Tell a Hoverfly From a Wasp?

You can tell a hoverfly from a wasp in a few different ways.

The first thing to look for is the wing direction. When a hoverfly is at rest, the wings on its back make a V, similar to the way that other species of flies do with their wings as well.

Hoverflies also have only one pair of wings, compared to the wasp having 2 pairs.

When a wasp is at rest, their wings will lay flat against their back. This is perhaps one of the easiest ways to tell a wasp from a hoverfly if you are brave enough to get close enough to glimpse their wings.

Another way to tell a wasp from a hoverfly is by looking at their eyes. Hoverflies have typical fly eyes. These large circular eyes rest on the side of the hoverfly’s head and tend to bulge outward.

Wasps have much more menacing eyes. They tend to be more oval and face closer to the front of the wasp’s face versus hanging off the side.

How the insect flies is a great way to figure out if it is a wasp or a hoverfly from a safe distance. If you are not wanting to look a wasp in the eye, watching it bounce from flower to flower can tell you everything you need to know.

A hoverfly can hover or seem almost still as it is suspended in the air.

Wasps lack this ability and must move up and down or forward and backwards to keep flying. If the insect seems to suspend in midair before darting off, it is most likely a hoverfly.

If you look closely, you’ll notice that the bottom of the hoverfly (the opposite end to hits head) is rounded and smooth. This is where you would normally find the stinger. But because a hoverfly doesn’t have one, it has a rounded body.

Compare this to a wasp, and you’ll easily spot a pointed stinger at the end of its body.

Hoverflies are extremely beneficial creatures. Not only do they help pollinate flowers as an adult, in the larvae stage these insects will consume aphids.

However beneficial they are, hoverflies can scare some people because of their appearance. They have taken on the appearance of many species of bees and wasps to trick predators.

Hoverflies have had to do this because they cannot sting or bite. Hoverflies are entirely harmless. They may be slightly annoying if flying near your ears, but they cannot harm you.