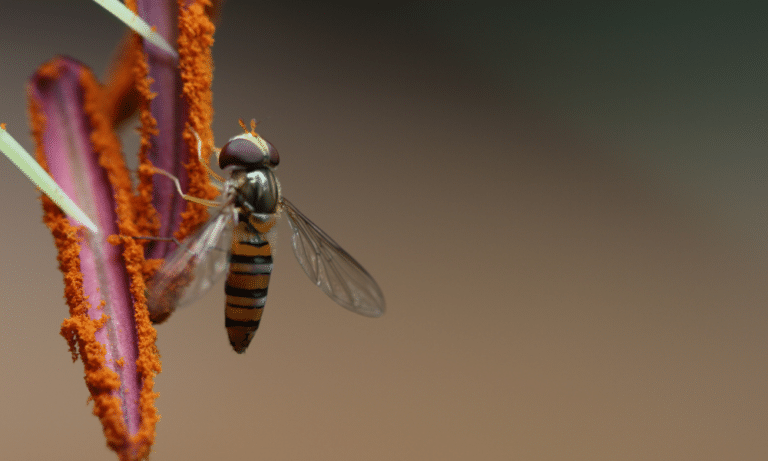 Hoverflies look just like small wasps or hornets as they fly around your garden with their yellow and black striped backs. But are hoverflies dangerous or not?

No, hoverflies are not dangerous at all. They cannot sting or bite you. They look like hoverflies to ward off potential predators, such as birds.

Hoverflies use a phenomenon called mimicry to look like similar, dangerous insects. They use this evolved trick to trick predators into thinking they are harmful when, in fact, they are harmless.

Are Hoverflies Related to Wasps?

The mimicry that hoverflies use often leads people to believe that they are small, baby wasps. But this is not the case at all. They use this mimicry to make predators think exactly that.

But hoverflies are not related to wasps. They do not have stringers like wasps. They are not aggressive like wasps. Instead, the only similarity is their striped back. This means if you see a hoverfly in the garden you shouldn’t panic like you would at the sight of a wasp.

Instead, hoverflies are completely harmless to you as a human.

No, hoverflies do not sting. They do not have the ability to sting as they don’t even have a stinger.

If you look closely at a bee or wasp, you can often see the stinger at their rear. If you do the same to a hoverfly, you’ll notice their rear-end is smooth with no stinger. Even if a hoverfly wanted to sting you, it wouldn’t be able to.

Do Hoverflies Have a Stinger?

No, hoverflies do not have a stinger like a bee, wasp or hornet. Although they have matching stripes, they have not evolved to develop a pretend stinger to further mimic other insects.

No, hoverflies do not bite. They have such small mouthpieces that they would struggle to bite a human. They can only eat small insects such as thrips and aphids.

The other thing to remember is that hoverflies are rarely in a position to bite a human. It’s nearly impossible to get a hoverfly to land on your skin. The moment you go near a hoverfly, it will scarper. It has no desire to attack.

People will often assume that any bug will bite you if it has the opportunity to. It’s why you’ll often end up with a bite or two after a few hours of gardening. The good news is that it is highly unlikely to be hoverflies as they simply have no need to bite you.

Yes, hoverflies can carry and transmit diseases… But not to humans! If you want to consider whether hoverflies are dangerous to humans and whether they can pass diseases to humans then the answer is a solid no.

However, there is evidence that hoverflies have passed infectious diseases onto other insects, including honeybees. This is rare, however, and is not something to be too concerned about. Nor is it a reason to try and kill hoverflies in the garden – especially when they can be hugely beneficial.

Ultimately, you need to leave nature to do its thing. These bugs have been around a lot longer than you have and it’s part of their lifecycle. One of the best things you can do when dealing with any insects in the garden is to let them get on with it without interfering.

Are Hoverflies Dangerous to Pets?

As you may have guessed by now, hoverflies are not dangerous to pets either. With no ability to sting, bite or spread diseases, there is no harm that they can do to your pets.

The fear with many bugs is that they might cause discomfort to a pet or pass on diseases. Neither of those can occur via hoverflies.

Like when a human comes close to a hoverfly, when a pet approaches a hoverfly, the hoverfly will simply fly away as they’re fearful of being attacked. They will not be aggressive or retaliate.

Hoverflies are not dangerous. Many people will see a hoverfly, notice its black and yellow stripes and assume it’s a baby wasp with the ability to bite or sting. But this is not the case.

Instead, hoverflies use mimicry to ward off potential predators who incorrectly assume it is more dangerous than it truly is.

So, next time you’re in the garden with your children or pets running around and you spot a hoverfly, there’s no need to panic as a hoverfly is not going to cause any harm to anyone or anything.