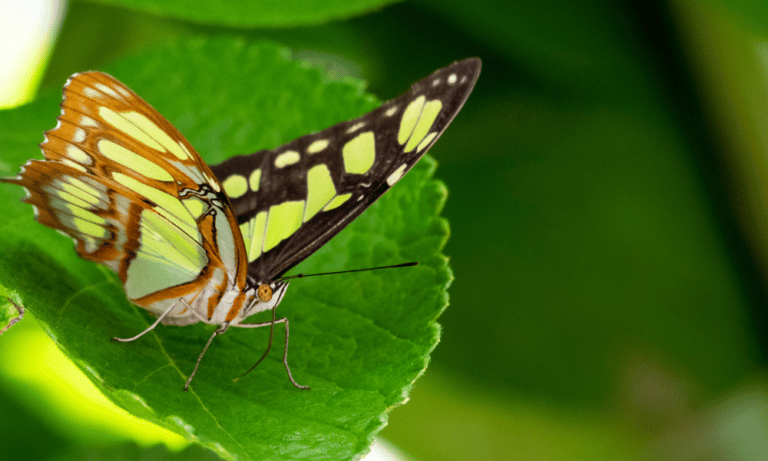 In nature, various shades of green are prevalent colours so it could be said to represent nature as a whole. It’s a good colour for camouflage, most especially when you live among leaves. Then again, if you’re too well camouflaged, it may make finding a mate more difficult.

Could it be that the meaning of a green butterfly is related to blending in? Let’s look at a few different beliefs to help you decide.

A green butterfly is a symbol of hope. If you see one, it should encourage you to keep going and never give up hope in whatever is happening in your life.

Some believe that seeing a green butterfly conveys that you are about to become wealth.

Another belief is that if you’re going through hard times, your luck is about to change for the better.

And if you have a business and happen upon a green butterfly fluttering by, your business is about to do well.

These are all powerful and positive messages.

Going back to the colour green being an abundant colour of nature, it is also a colour that can calm your anxieties. Should you be feeling depressed and down, look at the colour green.

It is meant to soothe your soul and rid you of negative emotions. There is some truth in this interpretation, as many studies show that a walk in nature is good for your mental well-being.

On the other side of the coin, the colour green can also represent bad things.

The saying ‘green with envy’, is one of them. And this is a colour often used to depict monsters and dragons. But worry not, because to make green, you need blue and yellow.

Blue is calming and yellow represents positivity, so green must have some positive attributes.

What you are likely to believe may be due to which culture you belong to. Ideally, try to stick to believing in the more positive meanings. So, if you see a green butterfly, it might be a good time to buy a lottery ticket; you never know if money might be coming your way.

Which Butterfly Species are Green?

The colour of a butterfly is more down to the results of evolution, and the genetic makeup of a species.

In the UK, there is only one actual green butterfly, which is known as Green Hairstreak (Callophrys rubi). It prefers habitats such as moorlands, long grasses, and heathlands.

It’s not a large butterfly, and the underside of its wings has a metallic shine, making it easier to spot between April and June.

Males are very territorial and will fight with one another, so if you see two together, it’s likely to be the males. The caterpillar will pupate on the ground and overwinter there, ready to emerge as an adult butterfly come spring.

We must mention another green(ish) butterfly known as the Brimstone (gonepteryx rhamni).

Depending on how the light shines on it, it can look light green, even though it’s mostly yellow. The male tends to be darker, making it look greener, whereas the female can be so pale that it looks almost white.

What’s impressive about this little creature is how it resembles a leaf, along with veins that stand out. It can have a medium-sized wingspan of up to 2.5 inches across.

You might come across it in the warmer parts of England and Wales, as it flutters around hedgerows, verges, and woodlands.

One of the most beautiful green butterflies has to be the Emerald Swallowtail (Papilio Palinurus), which is native to Asia.

It’s quite a large species and can grow up to almost four inches across its wingspan. The dorsal (upper) side of the wings is the green side, boasting a bright emerald green metallic band.

The under wings are more of a darker grey, along with colourful spots. The green on the wing isn’t actually a pigment but is more a reflection of the light on the blue-yellow fusion in the scales.

Finally, there’s Australia’s largest butterfly the Richmond Birdwing (Ornithoptera richmondia). The male can grow up to 5 inches across its wingspan and has green patterning in his black wings.

But the female grows even larger, boasting yellows instead of greens in its exquisite, patterned wings. The larvae can only survive on a specific plant known as the Richmond Birdwing Vine (Parastolochia praevenosa), hence its name. T

his vine is quite rare, making this butterfly an endangered species. With the clearing of forests, it has left these beautiful butterflies’ existence threatened.

This is an example showing how the balance of nature is truly important to our wildlife.