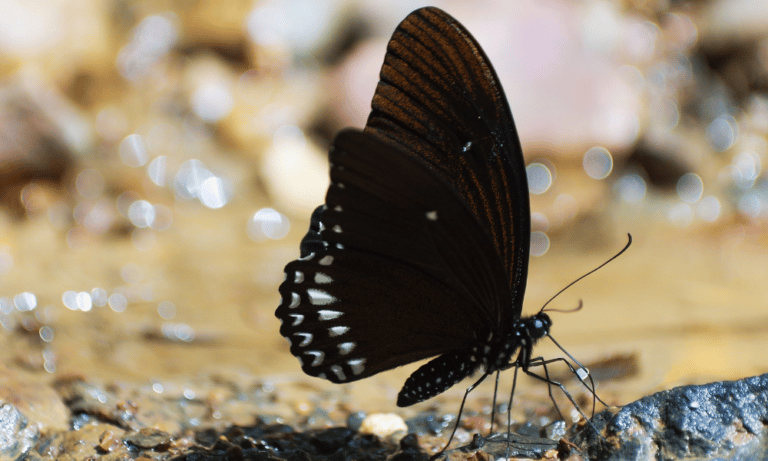 Black butterflies are pretty rare, so finding one would be a real treat and a moment to savour, should it happen to you.

You’re more likely to come across butterflies with black patterns, among other colours on their wings, such as the Zebra Swallowtail. It is a stunning little creature with black and white stripes, hence the name.

We think of butterflies as beautifully coloured insects that flutter around our gardens on lovely, warm summer days. Yet, because an utterly black butterfly is more uncommon, it makes their existence appear shrouded with mystery.

In some cultures, many animals play a role in spiritual messages, none more so than the creature that undergoes a metamorphosis. Equally so colours can also have spiritual meanings, so what does a black butterfly represent?

Well, it depends on its other colours too, and it also depends on which cultural belief you look at. For instance, Native Americans believe that a black butterfly symbolises the dark before the light. For them, this means that changes are coming.

In comparison, there are other ancient cultures more connected to witchcraft that believe a black butterfly is a bad omen.

Some believe dark colours are associated with negative energy, for instance, black is worn at a funeral. Does this mean seeing or dreaming of a black butterfly is a harbinger of doom?

According to Irish folklore, it represents a person who has been reincarnated because they couldn’t find the afterlife.

In ancient Asia, they believed that the black butterfly represents a symbol of death. If one was to enter your home, it means that someone in your family will pass away. Though, to add to the confusion, they also believe it could mean the end of something, such as losing your job or the ending of a relationship.

Whereas others look at the colour black as exotic and beautiful. In this instance, the colour is more associated with elegance. Seeing a black butterfly means that you will age graciously, leading to longevity.

Let’s end on a positive note for this beautiful insect. Greek Mythology believes that a black butterfly is a person saved from death by God. It represents freedom, whereby the spirit is unbound from the confines of the earth.

The various cultural interpretations of what a black butterfly represents are endless. If you do encounter a black butterfly, it will be such a rare moment that it might be better not to worry over any meaning behind it; and simply enjoy…

Which Butterfly Species are Black?

Despite being rare, there are quite a few species of black butterflies, so let’s take a look at a few of the popular ones.

Funeral Duskywing (Eryniss funeralis), found in South America. It can be black, or dark grey-brown. It also has a white fringe on the edges of its hind wings.

They have larger hind wings and narrower forewings. It is a small species with around a one-inch wingspan. Its ideal environment would be a dry, arid climate.

Wild Indigo Duskywing (Eryniss baptisiae), found in North America. A little larger with a 1.5inch wingspan. Can be black, or dark brown in colouring. Prefers woodlands and hedgerows where the male will perch at the top to attract a female.

Mournful Duskywing’s (Eryniss tristis) main habitat is in Central, Northern, and Southern parts of America. This little creature prefers to live in woodlands. As well as being black, it is more often brown, grey, or white.

All colours have a black body, which can often make even the brown species look a little darker. They too have a white edging on their hindwings. The males tend to occupy the higher ground, such as hilltops, to seek out a mate.

Swallowtails are so named because they have a tail shape to their hind wings, similar to the Swallow bird. They are truly black, though they do have small yellow spotted markings on the edges of the wings. Preferring hotter climes, they can be seen in open fields and deserts.

This is a long-lived butterfly with few known predators, which could be because of its dark colouring. Males are aggressively territorial.

Spicebush Swallowtail (Palilio troilus) is almost all black. The back end of their hind wings fades into either green-blue for the male, or a lighter blue for the females. This butterfly takes its name from its host plant, the spicebush.

As they feed, they continue to flutter their wings instead of resting. When not flying on their host plant, they will fly off in groups. If under threat, this species can emit a foul-smelling red liquid.

Finally, we’ll finish with the much-loved Red Admiral (Vanessa atalanta). These are fast becoming a more common sight on the British Isles.

Also found in other countries, such as Africa and America. There is good news for this species in the UK, as it’s believed to be increasing in numbers. This is said to be associated with the warmer winters the UK is now experiencing.

They are Mostly black in colouring, with distinctive red-orange and white stripes. These butterflies are long-lived, up to 10 months. In the past, they migrated to the British Isles. Studies are showing that it can now hibernate the milder winters, and so becoming a resident of the British shores.

Yes, black butterflies are not something you’ll see very often in the garden. You may think you’ve seen a black butterfly but it could be a moth or it might not be truly black in colour.

Are There Black Moths?

Yes, there are a number of black moth varieties such as the peppered moth, cinnabar moth and black witch moth.

Black butterflies can mean a range of different things. Rather confusingly, it depends on which group of people you listen to. Some faiths see black butterflies as a positive, while others see them as a negative.