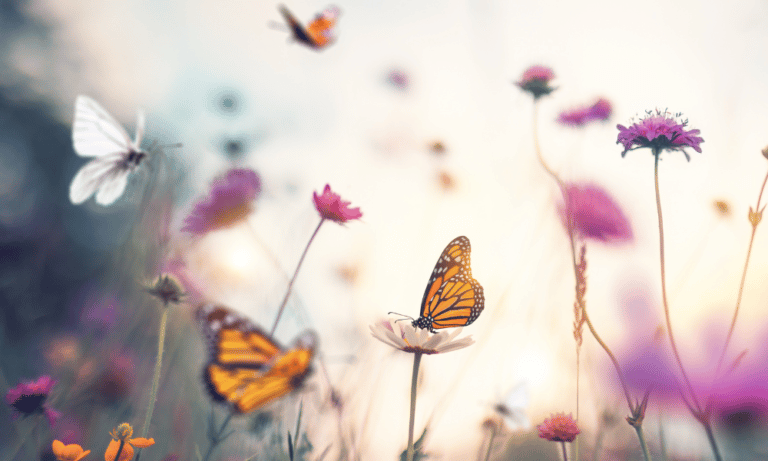 You probably know what a butterfly looks like. You’ve probably seen a few of them in your garden. But, there is plenty you probably don’t know about them. That’s why we’ve put together this list of fun facts about butterflies.

Don’t worry, we’re not going to make you wait to read our interesting, quirky and bonkers facts. Instead, let’s get right to it! Without further ado, here are our favourite, fun facts about butterflies:

1) There are Approximately 18,000 Species of Butterfly

Across the globe, there are roughly 18,000 known species of butterfly. Of course, there are bound to be further species we are yet to discover deep in the rainforest but 18,000 is already a pretty impressive number.

What’s even more bonkers is that this pales in comparison to moths. There are roughly 160,000 different types of moths across the world!

How Many Species of Butterfly are in the UK?

How Many Species of Butterfly are in the US?

There are approximately 750 species of butterfly in the United States. Some are resident species and others are temporary as they migrate to warmer climates during the colder months. This represents just 4% of all butterfly species!

From afar, a butterfly wing looks like a piece of artwork with intricate details and patterns. But, up close and under a microscope, you’ll actually find that they’re transparent.

This is because they’re made up of thousands and thousands of tiny scales that are made of chitin. Chitin is transparent.

3) Butterflies Taste with their Feet

Do you assume that if any animal or insect can taste then it must be through taste buds on their tongue? Well… A butterfly doesn’t have a tongue! Instead, it tastes through chemoreceptors on their feet.

They land on a plant and can instantly detect whether it’s sweet or sour. They also use these chemoreceptors when looking for a suitable mate and even to determine whether a plant is suitable for hosting its eggs.

4) Butterflies Only Live for 2 to 4 Weeks

It’s quite a depressing thought really but those elegant butterflies you see fluttering around your garden will only live for a few weeks, on average.

It’s worth remembering, however, that the butterfly stage is the final stage of the insect’s life. They have already gone through hatching out of an egg, being a caterpillar, going through metamorphosis and then turning into a butterfly.

What Butterflies Have the Shortest Lifespan?

Both The Small Blue and The Copper butterflies have the shortest lifespan among both butterflies and insects, in general, living just a couple of days.

As butterflies don’t have a mouth that can take in food, they actually don’t eat anything. Instead, they have a proboscis which can suck up nectar and other liquids. The proboscis is a tube-like structure that works much as a straw does.

When a butterfly visits a flower, they unroll the proboscis and then insert it into the centre of the flower where it draws up as much nectar as possible. They can also use their proboscis to suck up rotten, fallen fruit!

If you were put on the spot and asked “how many wings does a butterfly have?” Would you instantly jump to 2? Well, they actually have 4 wings!

They have two pairs of wings, each pair is made up of a fore wing at the front and a hind wing. The fore wing will usually overlap the hind wing somewhat making the hind wing appear a little smaller.

When in flight, these two wings will couple together to work as one continuous wing making it appear that butterflies have just one wing on each side of its body.

If you’ve ever spotted a butterfly sitting in the warm sun but not moving then this could be a result of them being too cold to fly and need to warm up the wings.

In fact, a butterfly needs to have a body temperature of around 30c in order to successfully fly. The air temperature also needs to be between at least 10c and 15c.

Butterfly eyes are nothing like ours. We can see blue, red and green which are then combined to produce the range of colours we can see. Butterflies, however, have six or more photoreceptors which means the colour band they can see is vast.

This ability to see a range of colours means they can distinguish ultraviolet and polarized light which enables them to pick out the best flowers to obtain nectar from.

9) Antarctica is the Only Continent With No Butterflies

Having read fact number 7, this fact probably makes a lot more sense! If butterflies were present in Antarctica then they would struggle to even fly.

Moths are also rare in Antarctica. If you include the subantarctic islands then you can actually find a couple of rare moths such as Agrotis Ipsilon.

This is an edge-case fact, but a cool fact nonetheless. In the Amazon rainforest, butterflies can be seen rushing to the heads of yellow-spotted turtles to collect tears from their tear ducts.

You might think that butterflies survive solely on sweet nectar but they actually need sodium and other minerals to survive for as long as possible. In the Amazon, salty sodium is not particularly abundant so butterflies have to resort to the unusual act of collecting turtle tears.

11) A Group of Butterflies Has Many Names

There isn’t one collective noun for a group of butterflies. Instead, they can be called a range of things including:

It’s just a case of picking your favourite! There’s something quite charming about calling a group of butterflies a flutter though.

12) Butterflies Can Travel at Speeds of 37 MPH

The average speed of a normal butterfly is between 5 MPH and 12 MPH. But this doesn’t mean there are butterflies who cannot exceed this.

Skipper Butterflies can fly at speeds of up to 37 MPH. For comparison, Usain Bolt hit a top speed of around 28 MPH when running the 100m.

Puddling is where butterflies look for vital nutrients in mud, rotting plants, rotting fruits and even animal faeces! Unfortunately, butterflies cannot get everything they need from nectar so they look elsewhere for the remaining nutrients they require.

The substances that they puddle in most by liquid or soft so that they can easily suck up any nutrients using their proboscis. Butterflies do not have a mouth with teeth that can break down hard or solid matter.

Butterflies only consume food that they can instantly convert into energy. Nothing they eat needs to be defecated and they, therefore, don’t ever poop (or urinate).

The complete opposite is true, however, when they are in their larval stage as caterpillars. Caterpillars are known to defecate almost constantly. They churn through so much food that they need to quickly extract all the goodness from it and then get rid of any waste ASAP.

There you have it! 14 fun and interesting facts about butterflies. Hopefully, there were plenty of facts that you weren’t aware of? Let us know in the comments section which was your favourite fact!

1 thought on “14 Fun Facts about Butterflies”