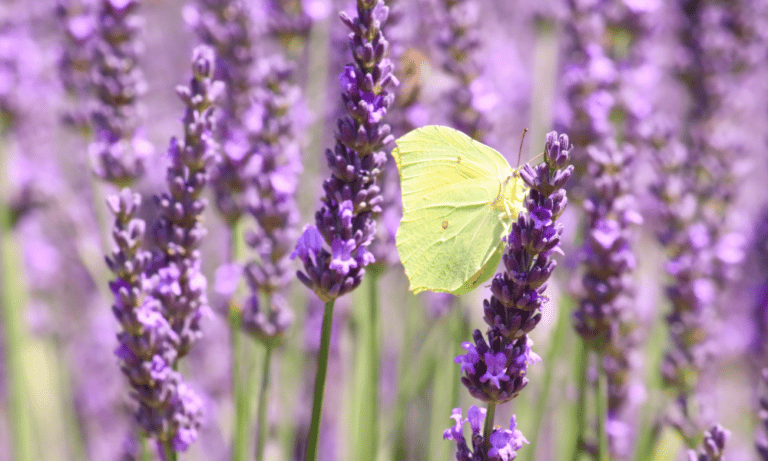 Lavender is known to be one of the most beneficial flowers for bees. Pop one in your flower bed and bees will come. But, what about butterflies? Does lavender attract butterflies too?

Butterflies will be attracted to the bushy bright purple flowerheads. For best results bunch a few lavender plants together as the butterfly is more likely to notice this rather than a single plant on its own.

Because the flower prefers full-on sunshine, this helps the butterfly too as they are more attracted to sunny spots. The plant does well in the sun because it’s drought resistant, though it will still require watering if it’s a long hot summer.

This showy, excellent plant is a perennial too, so it will return for around 5 years, showing off its bright, fragrant flower heads.

One of the butterfly’s favourite lavenders is the English Lavender (Lavandula angustifolia). It will detect the perfumed fragrance long before it sees the brilliant purple colours.

Lavender is not only found in purple but also in pink and white. A butterfly is more likely to be attracted to the darker colours, though.

If you want an unusual type of lavender for the butterflies, try the stunning French species known as Lavandua stoechas. It’s also known as Regal Splendour. The flower heads are a rich dark violet-blue, making quite a spectacular show in your garden when grown together.

Plant around 3 plants for every 5 square feet and they will soon spread. The butterflies will be attracted like magnets to the strong perfume.

Or you could try a crimson-red Lavandua stoechas, also known as Kew Red. It boasts lovely bi-colours that include pink petals that contrast well with the crimson-red ones. For this one, you’ll need around 6 plants for every 5 square feet.

For containers, try Lavandua angustifolis (True Lavender). It is rich in oils so the scent will attract those butterflies in droves.

Lavender is actually a herb that is a member of the mint family, which is most likely why it has such a strong perfume. The scents will attract other pollinators too, such as bees, wasps, and hornets. It will also draw in hoverflies, which will be quite beneficial to the plant as they will eat the harmful bugs that can destroy the plant.

There are a few beetles too, such as the Rosemary Beetle, that will eat their way through the leaves and flower heads. They love any aromatic herb, and not only rosemary as their namesake indicates.

The plant’s oils also work as a repellent against certain bugs. That’s because they don’t like the smells that the plant emits. That would include moths. But there are still plenty of pests to watch out for that don’t mind the smell.

Spittlebugs emit an encasing of spit-looking balls, hence the name. They may look unsightly, but they do not cause too much harm to the plant.

It’s the usual culprits that cause most of the damage to lavender, the sap suckers, such as aphids and whiteflies.

Finally, watch out for the Four Lined Plant Bug (FLPB) commonly known as the Poecilocapsus lineatus. It spends its time in the colder months of the year in an egg that has been inserted into the plant’s stems, by the female of the species.

The egg looks similar to a tiny banana, so if you can remove the egg at that stage, it would be better. They hatch in spring and do the most damage in the first month of their life. Try a mild soapy solution once they’ve hatched.

Overall, lavender is a luscious plant to have in your garden. If you put some dried-out lavender flower heads in your dog’s bed, it acts as a repellent against fleas. Or a few drops of oil in a pet’s bed can help calm them.

Though don’t use too much because lavender contains a compound called linalool that can be toxic to household pets if used in larger amounts.

Butterflies, like most pollinators, love lavender. It is loaded with nectar in each of its spires of flowers. Ultimately, butterflies want nectar so if a flower provides lots of nectar then they will be drawn in.

Can Butterflies Taste With Their Feet?