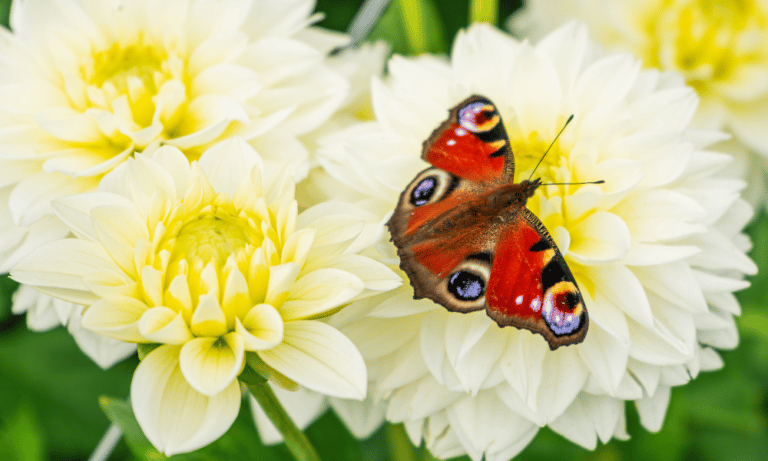 Knowing what to plant to encourage butterflies can be a challenge. Dahlias are popular flowers but do butterflies like dahlias too?

Butterflies do like dahlias, especially if the nectar is easy to access. Some dahlias will have complex flowerheads which are less popular with pollinators, however.

Dahlias are popular with many pollinators. They are attracted to the colourful flower heads, which make the flower stand out so much. Dahlias come in numerous bright colours, from reds, purples, pinks, yellows, and even white.

They are a great addition to any flower garden. Not only do they look bright and pretty, but they also attract butterflies that like to feast on the sweet nectar the plant produces.

Here are a few other good reasons for planting them in your garden:

Lots of wins then!

The butterfly is attracted to the dahlia because of the nectar it produces. They don’t eat or even damage the brightly coloured flower head. They’re only interested in the sweet nectar the flower produces.

Dahlias are high pollen producers, so you may need to think twice if you have an allergy to pollen. Some butterflies, such as the Zebra, will actually eat the pollen too.

Butterflies are attracted to the bright colours of all species of dahlia. They prefer the single flowerhead species because they are easier to access and have fewer outer petals.

However, there’s always an exception to the rule.

It has been noted that butterflies like a particular double-flowered dahlia known as the Gallery LaTour, which is pink. This species also has a large centre where the nectar is situated.

In general, butterflies prefer blooms with larger flower heads so they can land on them. A butterfly needs to settle as it feeds as it can’t hover.

You may find that butterflies tend to choose deeper colours such as reds, oranges, and darker yellows.  They are more sensitive to these colours than other pollinators, so the competition is lower.

Various species of dahlia have some great titles, and many butterflies are quite fond of one called the Taxi Driver. It’s bright yellow in colouring, which, no doubt, is the reason for its quirky name.

Butterflies need to be able to access the nectar of a flower quickly and easily. Complex dahlias might look a little more interesting in the garden but they are less beneficial to butterflies.

If you prefer reds in your flowerbed, then you could plant the dahlia called Dark Desire. It has dark red petals and a bright yellow centre, perfect for a butterfly to spot.

Or the yellow/orange variety called Harvest Inflammation which is akin to the colours of autumn.

There’s the classic Swan Lake, which, as its name implies, has white petals but a bright yellow centre, always attractive to a butterfly.

Or you may prefer the deep pink, oranges, or reds of the Bishop of Oxford, a great treat for any nectar gatherer.

There is even one species named Night Butterfly, which boasts deep red outer petals and white inner ones, with a nectar-rich yellow heart.

While pollinators, such as butterflies, are good for the dahlia, many insects are harmful to the plant. From snails and slugs to smaller insects such as thrips and spider mites, all of which will eat the dahlia.

Earwigs like to nibble on the petals, but they will also predate on some of the tiny bugs, so it’s a good balance as they don’t do too much damage to the flower head.

The female butterfly can also choose to lay her eggs on the dahlia, so you may need to contend with caterpillars eating the leaves too. But, if you want butterflies then you’ll have to put up with caterpillars!

Some smaller mammals are attracted to dahlias as well, such as rodents and voles because they like to eat the tuber bulbs.

Should you suffer blackflies on your dahlias, simply spray the plant with a weakened solution of washing liquid. Don’t worry, it won’t harm the plant.

On a final note, bees are pretty fond of taking a nap inside dahlias. It must be all that pollen collecting that tires them out midway. Although it’s more likely that if the bee is too cool it becomes lethargic and has a need to take a nap.

Butterflies like dahlias… A lot! This is especially true if the flowerheads are open and the nectar is easy to access. Butterflies are not particularly fussy when it comes to dahlias and will be drawn in by dahlias of most colours.