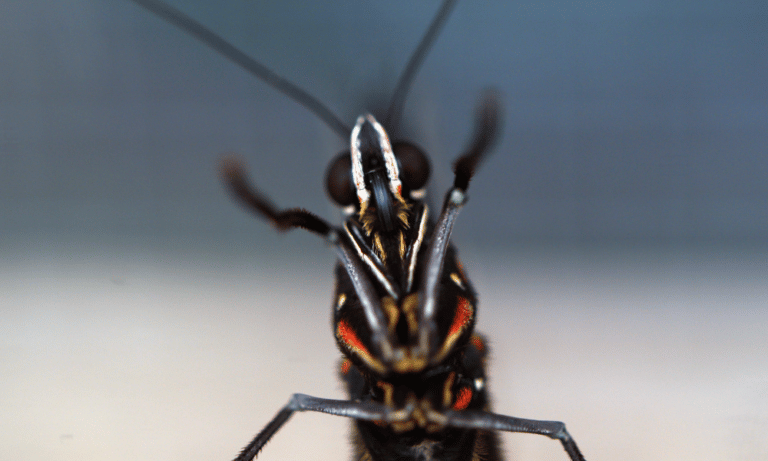 Teeth have many uses, notably as an aid to eating, for defence and intimidation, and even as a means of communication. Is it safe to assume that butterflies have teeth with teeth being so important?

Not only do butterflies NOT possess any teeth, but they don’t have lips either, simply because they don’t need them. The butterfly has a mouth that has developed into a proboscis, likened to a straw.

Whilst as a caterpillar, the proboscis hasn’t developed yet. Instead, they have mandibles that are similar to pincers.

Larvae will use them to cut up their food, usually leaves, into small parts. These mandible mouth parts are fused, which is known as labium.

Their mouths are the most critical part of their body because they will eat a lot. The larvae don’t have antennae yet either, so to smell and taste their food, they use a tiny bump under the mandible, which is known as a maxillary palp.

How Do Butterflies Eat?

An adult butterfly doesn’t eat solids, it only consumes liquids.

It’s controlled by fibrous muscles near the head, known as basal galeal and stipes.

A butterfly does not possess a nose to smell its food. Instead, it uses tiny sensors on its antennae and feet, known as chemoreceptors, that help them to detect odours.

An insect needs to have a sense of smell when it comes to food, so they can distinguish toxins in the plants they feed from.

The proboscis does have a few sensors to help them taste, but surprisingly most of their tasting sensors are based on their feet. Considering they have 6 feet, that’s quite a complex yet reliable way to taste food.

Using such sensors, the butterfly can often smell the nectar before it sees the bright colours of the flowerhead.

As soon as they land on a flower, they can pick up the smell and taste using their feet. This will help them to decide whether or not they have landed on the right flower head or if they should move on to another one.

A butterfly goes through many stages of development, with each one requiring a different means of nourishment.

As larvae, they will eat mainly leaves. However, the larvae are not picky eaters and will devour petals, stems, grass, and even fruits.

Once in the pupae stage, in its cocoon, it produces its food by creating digestive enzymes. This is a peculiar event as the liquid will mush up all the soft tissues of the larvae.

What remains the same, though, in this pupae liquid are specialised cells. They are sac-like tiny structures known as imaginal discs. This is how the skin or shell of the next stage will form.

It doesn’t sound nice, but it’s all very natural for the developing butterfly.

Do Butterflies Have Mouths?

The scientific answer is no -butterflies do not have mouths.

That’s because a proboscis is a long appendage in the head, much like an elephant’s trunk. The proboscis in a human would be the nose.

Although the butterfly, and many other insects, use this appendage to take in nutrients, it’s more likened to a tongue. Hence some may consider it to be an elongated mouth part.

It seems that nature has developed many weird and wonderful creatures, and a butterfly’s proboscis can be up to twice the length of its body. No wonder it needs to wind it up nice and tight when it’s not in use!

Do Butterflies Have Tongues?

A butterfly does not have a tongue as a mammal does. Our tongues are made up of muscle and skin and we have thousands of taste buds on them.

A proboscis is used in a different way to a mammal’s tongue. It soaks up liquid nutrients, like a paper on water, rather than sucking up the liquid as one would with a straw.

Some even liken it to a set of extended lips rather than a tongue. But its whole purpose is to feed the body with nutritional liquid.

Some insects can even have hook-like structures on their proboscis. They will use them to catch prey as the appendage lashes out, such as with lizards.

Butterflies do not have teeth, or even lips! Ultimately, they have no need for teeth. Everything they consume is in liquid form so they use their straw-like mouthpiece to suck up food.