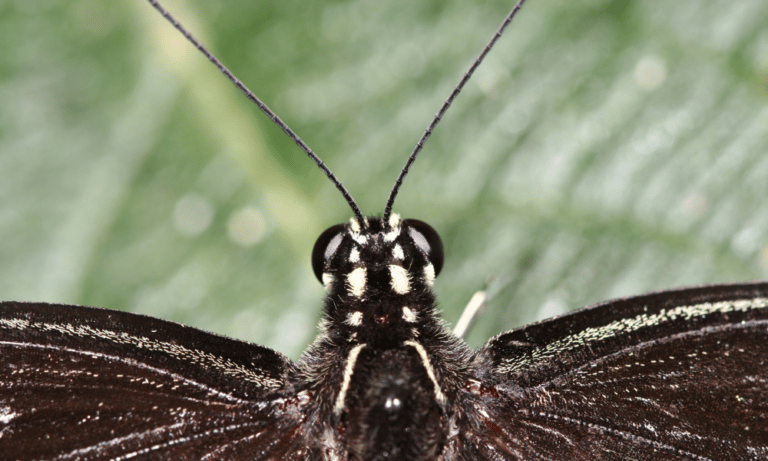 Many associations for the deaf have used butterflies as their symbol. This automatically makes people associate butterflies with deafness and leaves an impression that butterflies cannot hear. But do butterflies have ears?

Yes, butterflies do have ears and are not deaf. This is actually a myth. Whether all species of butterflies can hear is still not known. However, many have been proven to hear noises and possess ears.

Recent studies by scientists have shown some interesting revelations that have broken many myths associated with butterflies and their ability to hear.

The hearing organs are usually located at the wing’s base and cannot be seen easily. These ears are usually in the form of membranes and have an unusual shape which helps them hear a wide range of pitches of sounds. So yes, they have ears, just not in the form the expect.

For many years people assumed that butterflies were unable to hear. However, recent studies have found out that even though butterflies might not understand what is being said to them, they can hear it.

According to many scientists, the Nymphalidae species of butterfly can hear using methods such as neurophysiology and neuroanatomy. They have ears that are sensitive to sound that lie between the range of 500Hz to 6Khz.

Researchers and scientists still have not completely solved the mystery surrounding a butterfly’s ability to hear. However, many believe that butterflies can hear sounds of flight and also call for food from predators.

For instance, the butterfly species Morpho has ears that can detect the sounds birds make during flight. This unique feature helps them detect bird noises from a mile away and, therefore, protect themselves from bird attacks.

What are Butterfly Ears Called?

The membrane placed on the wings of some butterfly species that helps them hear is known as a tympanal membrane. It is oval and has a dome placed in the centre.

When these butterflies receive sounds, the membranes are hit by the sound waves. These waves are then transformed into nerve impulses that make hearing possible.

The membrane has an unusual structure. This structure, however, is known to help butterflies differentiate between low pitch and high pitch noises.

Scientists measured the nerve recordings of butterflies and concluded that butterflies are sensitive to low pitch noises, which is unusual for many insects.

The membrane shape also suggests that butterflies are receptive to a wide range of sound pitches, which ultimately elevates their ability to listen to nearby noises, especially that of their predators.

Being sensitive to low pitch sounds also helps butterflies detect the flapping of bird’s wings, whereas high pitch enables them to recognise birdsong.

Do All Butterflies Have Ears?

Unfortunately, scientists have not confirmed whether all butterflies have ears. Nymphalidae butterflies, which include a huge range of species, tend to have ears on their wings.

Yes, some moth species also have ears as butterflies do. A moth has hearing organs hidden beneath the hair at the bottom of its wings.

Do Butterflies Hear with their Wings?

Yes, some butterfly species have sensory hearing organs placed on their wings. One of the most well-known groups who do this is the Nymphalidae.

The Nymphalids can hear using their wings. These butterflies mainly include morphos, admirals, monarchs, and emperors and have ears in the form of holes on their wings.

These holes are cavities with membrane covers, similar to human eardrums. These butterflies’ forewings have strangely swollen veins that help them hear.

In research conducted by scientists, a sound having a similar frequency to that of the human voice was played for these butterflies. At the same time, a laser was also simultaneously used to record the butterfly’s wings.

The swollen vein of all the nymphs under study responded. In addition, when these veins were put under strain, the hearing ability of the butterflies was hindered. Therefore, they could conclude that these veins played a crucial role in a butterfly’s ability to hear.

Do Butterflies Talk to Each Other?

Butterflies have a unique way of communicating with each other. The mode of communication isn’t always verbal as they don’t have vocal cords.

One of the most obvious and common modes of communication used by many butterfly species is through colours. Butterflies also use different movements to communicate.

For example, many male butterflies aggressively flap their wings during mating, signaling other butterflies to leave them alone.

Butterflies are also able to communicate using smells and pheromones. This is usually when looking for a mate, of course.

Many species of butterflies produce squeaking noises like a pupa. These noises are often used to deter predators. The cracker butterfly is the most famous for communicating through sound using wings to create cracking noises.

Still got questions about butterflies and their ability to hear? Then check these out!

No, butterflies are not deaf. This is a misconception that is often spread. Butterflies can hear, however.

Can Butterflies Hear You?

There is a belief that butterflies can hear you. It is unlikely that they will be able to detect particular sounds, however.

Are Butterflies Attracted to Hydrangeas?

What Do Butterflies Mean in Dreams?