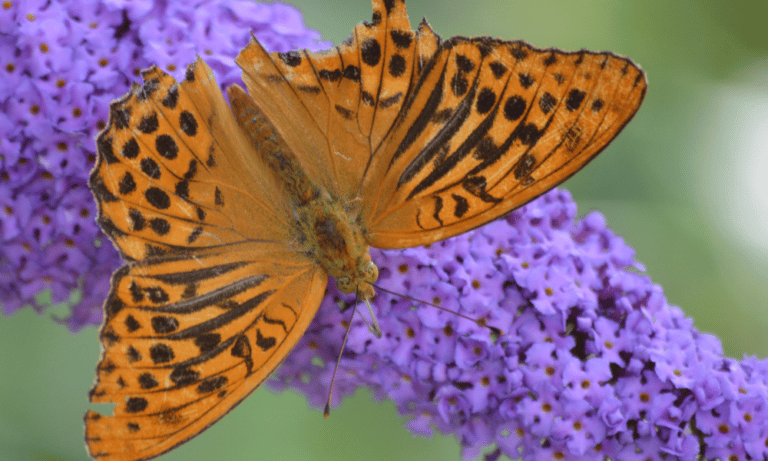 Butterflies have brains, an open circulatory system, muscles, and nerves. If a butterfly has a brain and nerves, it could lead us to believe that insects can think and feel as we do. But do butterflies feel pain or not?

Butterflies do NOT feel pain like we do, but they can feel it when they are being touched. This can lead to an automatic response, such as a threat ushering them to flight.

But to understand this concept, let’s consider the butterflies nervous system, known as the subesophageal ganglion.

A ganglion is a clump of nerves that control muscles and senses. The subesophageal refers to a ganglion positioned in the thorax section, as it is in a butterfly. There, it will control the neck muscles and salivary glands.

Within this nerve system, they can only sense touch.

That’s because they don’t possess the more complicated mechanism of pain receptors. Pain receptors are nerve-ending neurons that pick up signs of damage and then signal pain to the brain to make it go into action.

In turn, the brain releases chemicals to the cells, which trigger the healing of the damage.

Humans have around 200 pain receptors, many of them in the backbone, but butterflies do not have a backbone.

Butterflies do have thermoreceptors in their wings and antennae. But these receptors help them to sense the surrounding temperatures.

Do Butterflies Have Emotions?

We know butterflies have tiny brains, so does this mean they can feel emotions? As with the lack of pain receptors, they also lack self-awareness. Any creature that does not possess self-awareness will never feel fear.

However, they have good memories, as documented in scientific studies that observe their flight paths.

But do their bodies produce emotional chemicals as humans do?

This is a concept that is very hard to study scientifically. At the moment, all studies indicate that butterflies do not feel any emotional feelings.

They do produce mating chemicals. But their relationships are pretty short-lived, usually only a few hours, so they’re not involved in any build-up of the romantic kind.

Another emotion they can feel is stress, as in danger. Again, it will trigger an automatic response if the butterfly senses danger. It is likely to fly away using its survival instincts.

Can Butterflies Get Angry?

Anger is an emotion that has a purpose. For example, in humans, it is a complex emotion attached to a sense of injustice and is usually triggered as a response to one’s surroundings.

This is something the butterfly does not have; there is no complexity to its nervous system.

That said, male butterflies can get aggressive during mating as they see off competitors. Males tend to patrol certain territories, so if there’s an intruder, they will fight.

This is not anger, though, because that is more of an emotion. Their aggression is more about the action than any feelings.

It is instinctual, as in an automatic reaction, rather than something that takes some thinking, such as the build-up of anger.

Will Butterflies Bite When Agitated?

They might get agitated and defensive, but does that mean a butterfly will bite you? No, they won’t! With no teeth or mouth, butterflies cannot bite, so even when angry, they will not cause you any harm, fortunately.

What Emotions Do Butterflies Feel?

The quick answer is that they have no emotions. Instead, they have quick-thinking instincts.

The brain of a butterfly is only tiny and not used for thinking but more for a positive or negative reaction, such as flying away if they sense danger or staying around if the female senses a male.

They have good memories and a need to learn the best and quickest routes to their food. They can even readjust that route, such as finding new flowers once the nectar is all gone in their old route.

Their brain lends them excellent flight skills and navigation so that they don’t bump into things.

They may not have emotions, but they do have the main 5 senses:

They hear by using sensors on their wings, even picking up bat sonar noises.

They smell using sensors on their feet and antennae to find the sweet scent of nectar. They find brightly coloured flowers not only by seeing the colours but also using the smell of the rich nectar.

A butterfly has a sense of touch by using its feet, antennae, and tiny hairs on its body. It is one of the senses that helps them escape predators.

They taste using their proboscis (tube-like tongue), and this is how they feed.

With a compound eye, they can see in many directions. The eye can pick up colour, including ultra-violet, as well as movement.

So, the butterfly has the five basic senses, even though they use them differently from humans. Many of their actions are not thought out in the brain but are more automatic responses such as fight or flight.

Do you have further questions about a butterfly’s ability to feel pain? Check these out:

Do Butterflies Have a Conscious?

Yes, butterflies have a brain and therefore have a conscious. They understand their surroundings and can even remember faces and events!

Do Butterflies Have Nerves?

Yes, butterflies do have nerves. But, those nerves do not work the same way as other mammals. They do not have pain receptors. Their nerves simply let them know that they have been touched.

Do Butterflies Have Teeth?

Are Butterflies Attracted To Verbena Bonariensis?

What Do Orange Butterflies Mean?