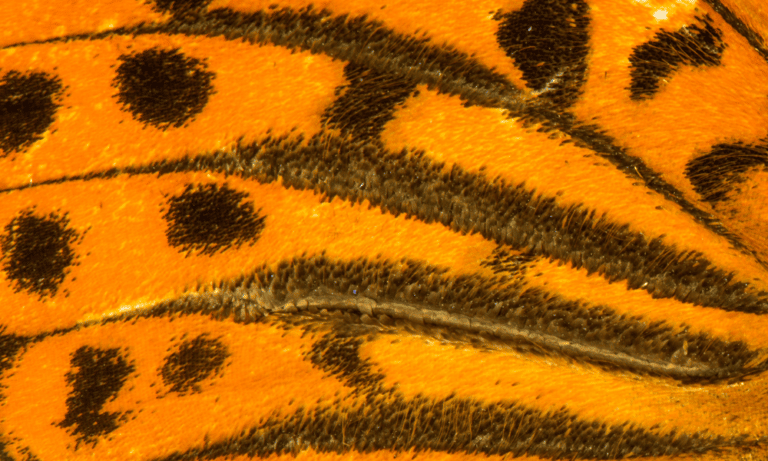 Most butterflies have bilateral symmetry. This is a feature shared with many other animals too. The butterfly has 4 wings which usually look the same on each side of the wing, though there are a few exceptions to this.

The rough structure and pattern on each wing will appear the same but, on closer inspection, you may find that some shapes are different in size to one another.

Why are Butterfly Wings Symmetrical?

Symmetry in living creatures is not some random chance. Instead, it has more to do with the laws of physics and evolution.

Going back in time, life in the oceans developed symmetry to propel the creatures forward in the water. As cells develop in various living things, the genes progress by dividing symmetrically. This ensures that all genes are carried forward.

A butterfly’s upper wings may not have the same pattern or even colouring as the lower ones. The pattern and colouring of a butterfly are fundamentally ingrained into its genome.

This means that the cells of each species will all share the same genetic coding, giving a species all the exact symmetry.

The patterns on butterfly wings can be intricate and further enhanced with flawless symmetry. It could be that the genome has evolved in such a way to make the pattern of their wings look striking to put off predation.

But… and there is always a BUT… Everything can change if a single egg is fertilised by different sperm. Or the parents come from other genomes.

Even worse, on rare occasions, some butterflies can be gynandromorphs. One-half of their body is male and the other half female. This can also occur if the cells mutate in development.

The result of such development is likely to be non-symmetrical wings, but it is very rare.

The colouring and patterns on the wings of butterflies are made up of scales, like tiny hairs.

Not all butterflies have brightly coloured and patterned wings. Some species of butterflies have evolved even further and developed to look almost invisible. One such butterfly is known commonly as the glasswing (Genus greta, species oto) butterfly.

Most butterflies have opaque wings that boast exquisite colours and patterns. The glasswing butterfly has transparent wings and can be found in South America.

As it is a migratory butterfly, it is believed to have transparent wings to avoid predation on its long journey.

When you’re travelling around 12 miles a day, at only 8 miles per hour, then you need a few clever tricks to keep the predators away.

Why do Butterflies Have Patterns on their Wings?

There are various patterns to butterfly wings. But what use do they have?

Some have eye spots, which help to scare and confuse predators. Brightly coloured wings could be advertising that they are poisonous, to put off being eaten.

Even in the form of pupae, the butterfly has evolved to use colours and patterns to blend into the background. Again, for protection against being predated

Having brightly coloured wings isn’t only about blending in. Sometimes they might want to stand out too, especially when it comes to mating.

Some species of butterflies can use ultraviolet colours in their wings to enable communication. In Asia, there is a deadleaf butterfly (genus kallima), and yes, it looks like a dead, brown leaf.

Its veins are darker and resemble the veins in a leaf. As the dry and wet seasons change, it even shows polyphenism. This means it can change its appearance according to environmental conditions.

At the end of the day, how a butterfly looks is dependent on its genes. Any particular pattern or colour variation has evolved according to pressures of predation and mating.

Butterfly wings are not only used for flight but are much more complex reasons. There are over 20,000 species worldwide, all of which are believed to have evolved from a single moth. It’s no wonder there’s a lot of gene variation in their development.

From afar, most butterfly wings will appear symmetrical. Their body will act as the axis, and the wings on either side will be mirror images. However, under a microscope or even under closer inspection, you may find that some shapes are slightly different in size.