Discover the Migratory Patterns of Sparrows 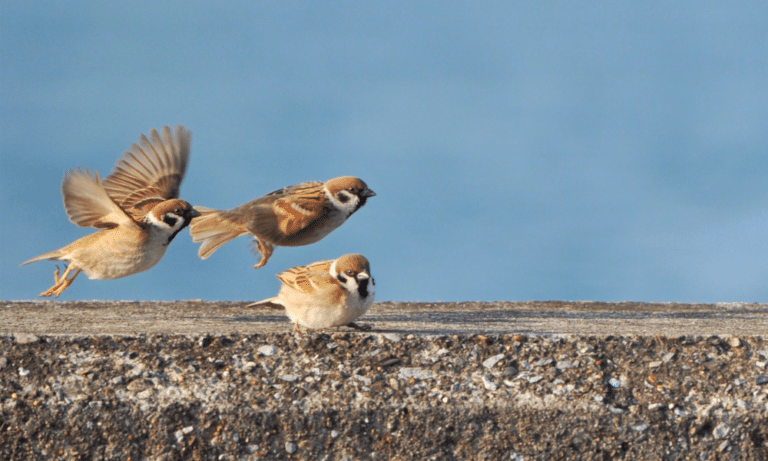 It’s well known that many species of bird will migrate to warmer climates to survive the colder winter months. But are sparrows one of these bird species? Do sparrows migrate or will they stay put?

Yes, sparrows do migrate. Many species of sparrows migrate – to an extent. Some sparrow species prefer to stay local, and only migrate a few miles in their lifetime while other species will travel thousands of miles.

Although, as a collective breed, sparrows are not migratory many types of the sparrow will show some sort of migration behaviour. Sometimes this can simply be going from high altitude to low altitude.

Generally, it’s sparrows from more northern (and therefore colder) regions that will migrate. Sparrows from Africa and from close to the equator have no need to migrate. Some of the most common sparrows which show migration behaviour include:

Most sparrows, however, will do all they can to stay within 1km of their nest and avoid migration unless absolutely necessary for survival.

Which Sparrows Do Not Migrate?

One species of sparrow that does not migrate is the house sparrow. This is because the house sparrow lives among humans. It is found almost everywhere humans are. From large urban areas to quiet countrysides, you have probably come in contact with a house sparrow.

Where Do House Sparrows Live?

House sparrows can be found all over North America. They were introduced in New York over 100 years ago, and have since spread across the entire United States and into Central America.

House sparrows get their names from where they like to nest. Yes, house sparrows will make a home in your walls, dryer vents, air conditioner ducts, trees, garages, and even inside your home if you do not keep a close eye.

House sparrows are aggressive defenders of their nests, another reason they have survived and thrived so well.

Since house sparrows are not migrating birds, they will often take up birdhouses set out by humans meant for other bird species.

You can wait to put out your birdhouses or plug the holes of the ones you already set out to help prevent house sparrows from stealing shelter from other bird species.

Why Have Sparrows Disappeared from my Garden?

There are a few reasons that you may be noticing a difference in the sparrow population within your garden from year to year.

While it can be alarming to see a sudden drop in sparrows or other birds, it could be caused by something as simple as bad or colder weather than usual.

Below, find a list of reasons you may not be hosting as many sparrows in your garden this year.

Where Do Sparrows Migrate to and from?

One species of sparrow, the American Tree Sparrow, has one of the longest migratory patterns of any sparrow. This species of the sparrow will head south for the winter, making it as far as Arizona in some cases.

These birds usually travel in flocks, with the females heading further south than the males.

Once winter is over, the American Tree Sparrow will head back north, making it as far north as northern Canada. After arriving, the sparrows will begin their mating season before beginning to head south for winter again.

Other species of sparrows do not migrate and overwinter in nests nestled among humans in suburban areas. These species have adapted to live alongside humans, benefiting from the interactions.

If you want to know more about sparrows and their migration, check out these FAQs:

No, the house sparrow does not tend to migrate unless temperatures plunge to extremes. Generally, they will remain in one place.

Do Sparrows Fly South for the Winter?

Yes, sparrows will generally fly south during the winter to find warmer temperatures until the cold spells of the north have passed.