Why Do Hornets Kill Honey Bees? 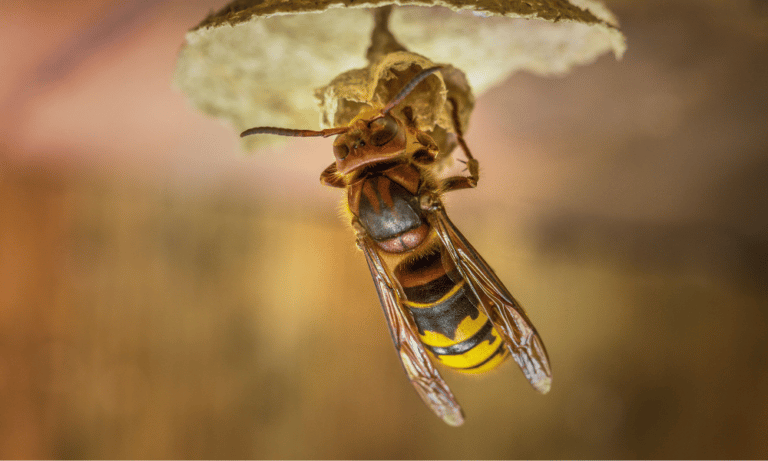 Bee keepers and enthusiasts often wonder what can be done to protect precious honey bee colonies from demise. With the bee population decreasing, it is important to find ways to protect these pollinators. When it comes to predators of bees, what can we do? Why do hornets kill honey bees?

Hornets kill honey bees as a food source. They can attack honey bees midair in flight, on a flower foraging for nectar, or in their hives.

Adult hornets, as a group, can infiltrate a bee hive and, within hours, destroy almost the entire colony. Other hornets act alone, looking for a meal or just a snack to bring back to their nest.

Is It A Hornet?

Wondering if it is truly a hornet that you are seeing flying around your property? There are currently only two true hornets located within the United States, the European Hornet and more recently, the Asian Hornet.

European hornets have a mostly yellow abdomen with black “teardrop” markings on them. They tend to nest in cavities and sometimes forage at night. These hornets are not necessarily aggressive, but be wary and mindful of their nests and leave them their space.

The newest threat to bees is the Asian Murder Hornet. Before 2019, this hornet was only found in places within Asia, such as Japan. These hornets have a bright orange face.

The biggest disguising factor, and the easiest to see, is their massive size. Asian hornets grow over 2 inches in length. Their huge stinger is no match for even the best beekeeping suit and their venom has been known to kill people even when they are not allergic.

Should You Worry About the Asian Hornet?

The Asian Murder Hornet is a bit scary – the name along is pretty terrifying! Picturing a flying insect the size of half your palm with a stinger full of deadly venom and an aggressive attitude is enough to make anyone sweat.

While the Asian Hornet absolutely should be taken seriously, there have only been a handful of confirmed sightings both in the United States since 2019 and the United Kingdom.

The Asian hornet scene is definitely one to keep an eye on, but as of right now, I think it is safe to say that you do not have to worry about stumbling across a murder hornet nest.

Scientists are still studying these insects to see when or even if they will be able to keep a foothold in America. So, in the meantime, if you think you have found a murder hornet, contact local wildlife services.

What About Bald-Faced Hornets?

That is because bald-faced hornets are actually wasps. Bald-faced simply means “white-faced” in this context.

How to Know If Hornets Killed Your Honey Bees?

Hornets are nothing to mess with when it comes to honey bee predators. A single hornet most likely will not do major damage to a colony of bees. When a single hornet enters the beehive, the worker bees will defend their hive, attacking and killing the hornet.

The bee’s main concern is when a large number of hornets come and attack. The European hornet will usually attack beehives in late summer or early fall.

You will know that your bees have fallen victim to a hornet attack if you notice a large amount of dead bees outside their hive. This is also a familiar sight if your bees have gotten into pesticide laden nectar.

However, the bees that were killed by hornets will be missing their heads. Hornets rip off the honey bee’s head when they attack. Then they eat them or carry them back to their young.

Do Hornets Kill All Bees?

Hornets live off of other insects. While they can and do eat other bees, they seek out and prefer honey bees as their main food source. Hornets love the nutrients honey bees provide, and the bees are extra delicious thanks to their honey.

Hornets will attack and kill honey bees while they are flying through the air or while the honey bee is resting on a flower. They will then take the body of the bee back to their young as a meal.

Oftentimes, in late summer or early fall, a large group of hornets from the same nest will attack a honey bee hive. When a lone hornet infiltrates a beehive, the bees spring into action and can ward off or kill the intruding hornet.

However, when a large number of hornets attack, they can decimate a hive in a matter of hours. Hornets feed on the adult honey bees, their larvae, and their eggs.

Why Do Hornets Eat Honey Bees?

Hornets love to eat honey bees because they are packed full of nutrients and, because of the honey they produce, are reported to be sweet in taste too!

Do Hornets Take Over Beehives?

Hornets will only attack a beehive to kill and consume the honey bees inside. They will not do so to find a new home for themselves. Instead, they’ll often attack a beehive and then take the dead bees back to their nests.

Hornets are a natural enemy of honey bees. Since these insects hunt and eat honey bees, beekeepers should be aware of any hornet’s nests near their hives. Even a single hornet can do a lot of damage to a bee population.

With a predator as intense as hornets, it is relieving to know that there are only two confirmed types of hornets in America. Of the two, the Asian Murder hornet is rarely seen and has only had confirmed sightings a handful of times.

Hornets will attack and eat other types of bees, but they prefer honey bees. So as a beekeeper or just as a bee enthusiast, you need to be aware of hornets near the honey bee hives. If you notice a hornets nest, call your local exterminator for advice on how to safely remove the hornets.