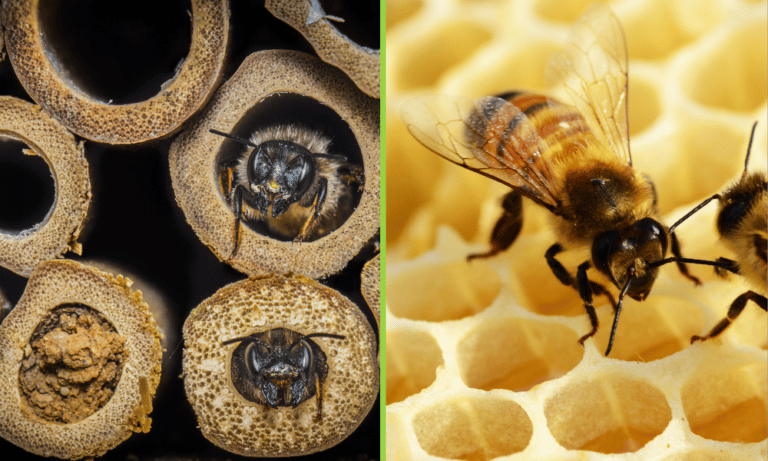 Since bees are good for the environment as pollinators, it helps to know a little about some of the most popular species. Without bees pollinating plants, there may be no plants for insects to live on and for grazing animals to eat.

But are all bees created equally? Do all bees pollinate? And are all bees beneficial? Let’s take a closer look at two popular bees: Mason bees vs honey bees.

What is a Mason Bee?

They come out earlier than other species of bees, so are pollinating for longer. Plus, they will go around more plants than most other bees. Like many other bees, this is a solitary species, preferring to live alone.

Even though they often share the same entrance to their nest, they will not lay their eggs in the same tunnels.

Where they prefer to nest is given away in the name of the bee, they like soft mortar or even sandy mud to dig out their tunnels.

Their name also means ‘odour’ in Latin, which refers to the lemony scent they mark the entrance of their nests with. Rather than start a new hole, they prefer to look for existing holes in building structures, rocks, trees, and even on the ground.

Sometimes they’ll choose the strangest of holes, such as a keyhole.

Sadly, their life cycle is a short one, living between 4-6 weeks if they’re lucky, with the male (drone) having the shortest life span of a couple of weeks. The nests can often be predated by parasitic wasps, who lay their eggs inside the mason bee egg. When it hatches, it will eat the larva of the mason bee.

You won’t see solitary bees in swarms, but when they mate, there may be around 5-6 of them flying together in the air.

What is a Honey Bee?

A Honey bee (Apis) is one of man’s best friends because not only do they help to pollinate agricultural fields, but they also produce honey that we can eat.

Many honey bees have been domesticated, in that beekeepers care for their hives. Being a very social little creature, the honey bee lives in a colony with thousands of other honey bees.

Though most of the residents will be female, hatched from their eggs as worker bees. That means they all must play a role in the colony to keep it running.

Whilst the queen bee lays all the eggs, she doesn’t allocate the jobs that are decided by their genes. Some will care for the eggs in the nursery.

Others will fly out to forage for nectar and pollen. There are also guarding duties, and then there will be the maintenance and cleaning tasks within the hive.

Honey bees are not only known for the honey they produce but also for their waxy substance.

The queen produces it so the workers can make honeycombs to store the eggs. This is another substance humans use in products such as candles and cleaning solutions.

The larvae begin their lives on royal jelly, a rich milky secretion produced by the nursery workers. Later they go on to eat nectar and pollen unless they’ve been chosen as a future queen, in which case they’ll grow larger on royal jelly alone.

The main difference between these two species is their lifestyle, with a mason bee being solitary and a honey bee being social.

Because the honey bee lives in a colony, they produce honey from all the nectar collected, but mason bees don’t make honey. It takes many bees to make honey, and they make more than they need so they can store it away for winter. Mason bees don’t live that long and therefore don’t hibernate.

Mason bees are a smaller species than honey bees. The sting from a mason bee female is not as painful as it is from a honey bee female.

All female mason bees will mate, build a nest, and lay a handful of eggs. Only the queen honey bee can lay eggs for the rest of the colony to care for them.

It’s the mason bee that is the more prolific pollinator, successfully pollinating around 95% of all flowers they visit. It helps that the female has dense hairs on her legs, known as a scopa.

Also, she’s more likely to visit a wider variety of flowers than the honey bee, pollinating everything she touches. Whereas the female honey bee has a little sac where she collects pollen and takes it back to the hive. Honey bees will only pollinate around 5% of the flowers they visit.

They look different, although the female mason bee does have a few typical orange hairs. Some mason bees can be mistaken for wasps, though they don’t have the pointed tail end.

They are both pollinators and, therefore, important to the ecosystem.

In both species, it’s the female who has the sting. Neither of these male species possesses a sting.

Males are treated poorly in either species, and both live short lives. The honey bee drone is allowed to hang around in the hive over the warmer months in case there’s a new queen that needs to mate.

But she only needs to mate once, so the chances are that none of them will ever have that opportunity.

As the colder months approach, the male will be starved and evicted from the hive, where he will not survive. Equally, the only purpose of a male mason bee is to mate. It doesn’t live in the nest, though it may sleep in an unused one.

Beekeepers are interested in running apiaries of both species. Mason bees because they are such good pollinators and will ready local flowers for the honey bee.

Honey bees for their production of honey and waxy honeycombs. Mason bees don’t take much caring for, whereas a hive of honey bees does.

Finally, the use of chemical sprays in agriculture puts all bees in danger, and none more so than the gentle mason bee and the busy honey bee.

Do you have more questions about what makes mason and honey bees similar and different? Then have a look at these FAQs:

Are Mason Bees the Same as Carpenter Bees?

No, mason bees do not make honey. It is honey bees, hence the name, that produces the honey we know and love.