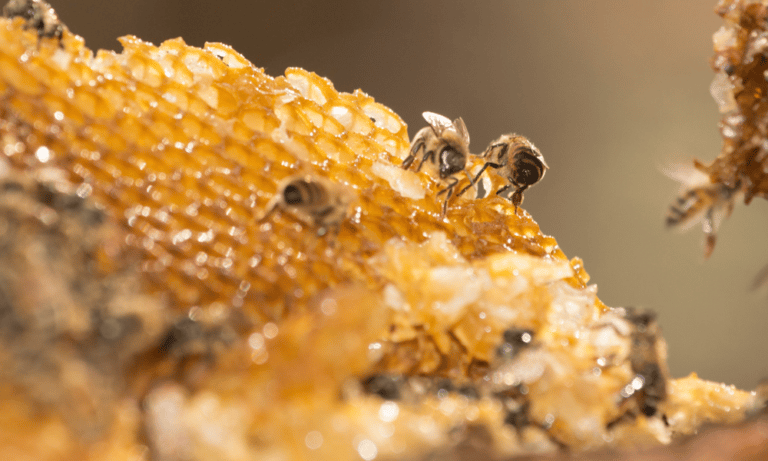 The very existence of honey, for humans, is all thanks to the humble honeybee. They store the nectar in a second stomach, and because of this, some people assume that the bee vomits to get the liquid back out again. But is this the case? Is honey bee vomit?

No, honey is not bee vomit. It is regurgitated out of their second stomach but the product is not vomit.

Where Does Honey Come Out of a Bee?

Nectar is first collected from a flower and stored in a special sac (crop), also known as a second stomach, to be taken back to the hive. It is then regurgitated out of its proboscis (tube-like tongue), to be delivered back to the hive.

To better understand this process, let’s look at what honey is made of, and how it’s produced.

Honeybees live in colonies that will include thousands of female worker bees. The population can be between 10,000 and 80,000 bees, of which 99% will be female.

The remaining 1%, around 200 will be male bees (drones). The drones have nothing to do with making honey, though they do eat it.

Each set of female worker bees will be born into a specific task. The queen bee produces pheromones for her workers, which will indicate what work she wants carrying out in the hive. It’s quite a complex society, and if any are caught being lazy, they will be evicted from the hive.

Those bees who are allocated the task of foraging are the ones to bring back the nectar and pollen that they collect from flowers. The forager will fly up to 3km (2 miles) away from the hive searching for nectar and pollen.

All the while pollinating the blooming flowers as they move around. They may also collect honeydew, which is a sweet sticky substance that comes from the anus of insects such as aphids.

They tend to only collect this if there’s a shortage of nectar, and they don’t collect it in large amounts.

The forager uses its proboscis (tube-like tongue) to suck up the nectar. It will then be stored in its crop. The nectar collector will produce enzymes (invertase) that mix with the nectar in their crop.

This breaks down the sugars and thus helps to make the nectar into honey. Although the crop could be described as a second stomach, the contents of it are nothing to do with the digestive system of the bee.

It will allow some of this nectar into its main stomach for its own food source, but that does not return to the crop.

Pollen, however, is collected by the static in the dense hairs of a bee’s legs. Some pollen will be dropped off as they visit other flowers, thus doing their share of pollinating. But there will be plenty that remains stuck to the comb-like hairs to be stored away when they return to the hive.

Is Honey Bee Spit or Poop Instead?

A saliva gland in the crop is used to break down the nectar sugars, this is why sometimes honey is referred to as bee spit.

The nectar goes nowhere near the main stomach or rectum, so honey is not bee poop. Honeybee saliva is not the same as saliva in animals and mammals, so whether the name bee spit is accurate is debatable.

Upon returning to the hive, the forager will regurgitate the nectar to pass it over to other worker bees. When she does this, it’s passed from mouth to mouth. This is likely where the terminology of bee spit comes from.

A bee has two salivary glands, and one of them is used to create the enzymes in the crop for the nectar. The other is used to secrete a glue-like liquid that feeds the young by mixing it with pollen powder to help glue the grains together.

Once the nectar is stored in the honeycomb pockets, the worker bees in the hive get to work on it. In the honeycomb storage area, there will be much flapping of their wings.

This serves to pull out any water retained in the stored nectar. Yet another process in making nectar into honey.

Some forager bees will collect nectar only, and others pollen only, and some, such as the older one, may collect both.

Nectar is a liquid that’s stored in the crop, whereas pollen is a powder stored in hairs on the bee’s legs.

Do you have further questions about bees and whether or not the honey they produce is vomit? Then have a look at these FAQs:

Can A Bee Throw Up?

No, bees do not have the ability to throw up. They can regurgitate nectar, but they cannot throw up.