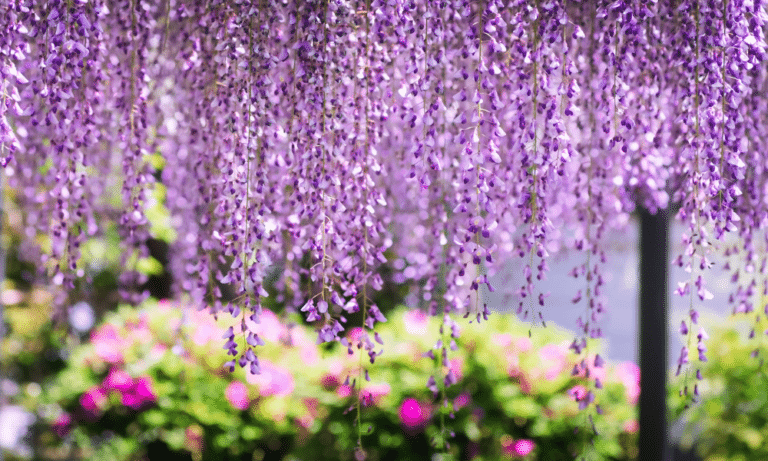 While deciding what to grow in your garden, you’ll want to consider what plants will bring in pollinators. Most plants need pollination to occur to produce flowers.  So, what if you want to grow a beautiful flowering climber like wisteria? Does wisteria attract bees? Or is it only visually appealing?

Yes, wisteria does attract bees. Wisteria belongs to the pea family which also includes soybeans, peas, clovers, and peanuts. This family of plants is known for its large quantities of nectar and pollen which is ultimately what bees look for in a plant.

Is Wisteria Good for Bees?

With its beautiful purple, blue, and pink clustered flowers, abundant pollen, and irresistible fragrance, wisteria is a bee magnet.

Wisteria vines only bloom for a short period of time, however, but do produce extremely fragrant flowers during this short spell. These flowers provide ample nectar and pollen for the bees and other pollinating insects.

Since wisteria is an early bloomer, usually reaching its peak around the end of May or early June, bees flock to the wisteria vine as an early and bountiful food source making it a great addition to any pollinator garden.

Yes, bees pollinate wisteria. Thanks to its naturally attractive fragrance and bold, bright flowers, bees are extremely attracted to wisteria vines. This is beneficial for the wisteria plant as it relies on bees, and other insects, for pollination.

While wisteria plants produce both male and female flowers, it is necessary for the pollinating insects to spread the pollen from male flowers to female flowers. Once the female flowers have been pollinated, the flower will turn to a fruit.

Be warned, however: Do not eat the wisteria fruit as it is toxic to humans.

Your wisteria vine will still flower, even if not pollinated as it produces both male and female flowers. If you are disappointed in a wisteria vine that is not producing the signature trailing flowers that wisteria is known and grown for, your wisteria vine could be too young and immature.

Most wisteria plants, especially if grown from seed, will not produce flowers until it has grown out of the juvenile stage and into adulthood. This can take 5-10 years from seed. It is best to buy an already mature wisteria plant if you want flowers during the first season.

Is Wisteria Poisonous to Bees?

No, wisteria is not going to poison bees. In some online forums, some people seem to think that wisteria could be poisonous. But, think about it, a plant that is reliant on bees for pollination isn’t going to evolve to poison the insects they rely on for survival.

Why Should You Not Plant Wisteria?

Although wisteria is hugely beneficial, there is one thing to be aware of: It has very aggressive roots. Before you know it, wisteria will have taken over and be growing everywhere. If you have a small garden, it is possible to keep wisteria in a pot, however.

What Other Insects are Attracted to Wisteria?

Wisteria plants are beacons calling out to all sorts of bee varieties including bumble bees, carpenter bees, and honey bees. But does wisteria also draw in other insects?

Other pollinating insects like wasps and butterflies are also attracted to wisteria .

Wisteria is a wonderful addition to butterfly gardens and, during the early summer months, wisteria can be coated in a variety of butterfly species – even some moths are night!

While a wisteria vine swarming with butterflies and bumble bees sounds enchanting, there are some insects that can be detrimental to your plant’s health.

What Pests are Attracted to Wisteria?

Not all insects are good for the wisteria. This plant is also susceptible to pests like aphids, long-horned borers, and scales. These can spread quickly throughout your wisteria plant, severely damaging it, or even killing it.

Be sure to keep an eye out for pests and use proper treatments to prevent an infestation from arising. If you notice an infestation, work quickly and efficiently. Begin removing the infested parts of your wisteria plant.

However, we would always err on the side of caution when using pesticides. You might be doing all you can to attract bees but using pesticides will negate all the effort you’re making. You’ll only kill the bees! Instead, use natural remedies for dealing with any pest infestation.

Wisteria is a great addition to your garden. This pea family member provides some of the first food sources for pollinators coming out of hibernation each spring. The large purple flowers provide ample nectar and pollen for all sorts of bees, butterflies, and beneficial wasps.

In return for providing nectar to these pollinators, these insects pollinate the wisteria flowers to help produce seed pod fruit. This is how the wisteria plant will produce more plants. While the seed pods are a natural part of the lifecycle of a wisteria plant, pollination is not necessary for your wisteria plant to produce the signature drooping flower clusters you picture when thinking of wisteria.

Be sure to keep an eye out for pests and other damaging insects, as they are also attracted to the alluring fragrance of wisteria flowers. All-in-all, wisteria vines are wonderful for attracting pollinating insects as well as being an awe-inspiring addition to anyone’s outdoor space.

Do Bees Have Lungs?

Do All Bees Sting?