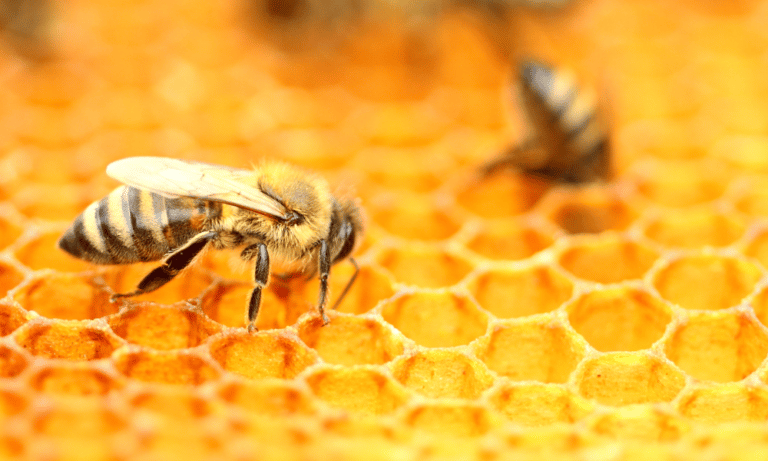 Honey bees spend most of their time pollinating flowers, collecting pollen, and making honey in their hives. Female worker bees will fill the colony with honey and protect and look after the queen bee at all costs. But does this mean that honey bees kill other insects too?

Yes, if another insect would come near or try to disrupt or hurt the colony, honey bees would attack. While honey bees do not actively search out other insects to hunt or kill, they will defend their homes to the death.

Do Honey Bees Eat Other Insects?

Some insects, like wasps, are carnivores. This means they eat other insects or animals. Honey bees are not carnivores and survive mainly on honey and nectar from flowers.

Honey bees store honey in their hives as food to sustain them during the long cold months. Female worker bees only live for about 6 weeks, so some worker bees are born and die without ever leaving the hive in search of nectar.

Female worker bees also produce a substance called royal jelly, but this is only fed to the queen bee.

If the hive begins to panic over a honey shortage, the honey bees may turn to eating their larvae or eggs. However, this is rare. Dry hot summers and early fall tend to be times when honey bees panic over honey supply.

The queen will begin laying fewer eggs to protect limited food sources and some honey bees will even try to attain honey from other hives. Honey robbery is common in honey bees who have honey insecurity within their hives.

However, this is a dangerous attempt because the other hive will protect its resources with great and often deadly force.

What is a Honey Robbery?

Honey is important for honey bees. Female worker bees spend their entire lives of about 6 weeks creating honey in the hive to help feed the colony. Honey is produced after a honey bee consumes pollen and nectar.

Once the colder weather sets in and the flowers begin to die, honey is the sole source of food for honey bees.

When some hives do not prepare enough honey for their hive to sustain themselves, they will send scouts to other hives to sneak in and steal honey. This process is called a honey robbery.

These scout bees can be discovered by the hive and the bees will attack and most likely kill the trespassing bees.

Can a Hive Survive Robbing?

Generally, a hive can survive a robbing and it is unlikely to be the cause of a hive collapse or complete mortality of the hive’s occupants.

How Do Bees Protect Themselves Against a Hive Robbery?

Ultimately, worker bees will remain on the outside of the hive to fight off anyone attempting to gain entry to the hive who doesn’t belong there.

Do Bees Sting Other Insects?

Bees can and will sting other insects. Honey bees are not aggressive and generally get along well with other insects, animals, and humans. However, honey bees live in hives and will defend their colonies to their death.

Honey bees are the only type of bee to have a barbed stinger, leaving it embedded in their victim’s skin, thus killing the bee as the stinger rips away.

However, when a honey bee stings another insect, the barbed stinger does not detach itself from the bee. This means that honey bees can sting other insects repeatedly, until death or concession by the other insect.

What is the Enemy of Honey Bees?

Bees, like most insects and prey animals, have natural enemies. Some species of wasps will kill and eat bees or bee larvae. However, the biggest and most dangerous predators of honey bees include bears, badgers, skunks, bee-eaters, and hive beetles.

Bears and honey are a classic combination. Everyone knows Winnie the Pooh and his classic red honey pot.

In the wild, bears will discover a honey bee hive and return night after night to enjoy some of the honey and the bees from inside. In some cases, the bear will even crack open the hive, destroying it to consume the honey within.

Badgers and skunks are insectivores. If you notice a lot of discarded bee bodies near the hive, you are most likely witnessing the aftermath of a badger or skunk attack.

These animals chew on the bees to eat their insides, then spit the exoskeleton out. Skunks and badgers will not eat the honey from inside the hive.

Bee-eaters are birds that, as the name implies, eat bees as well as other insects. These predatory birds will watch bees bounce from flower to flower before swooping in and having them as a snack.

Hive beetles are a big problem for beehives and can destroy one in a few days. These beetles lay their eggs in the honeycomb of the beehive. Once they hatch they feed on the bees’ larvae and eggs, destroying the next generation of honey bees.

Honey bees are docile but protective insects that do not attack unless provoked. These insects can sting and kill other insects if they need to, but it is rare. They do not seek out insects to hunt and eat as they do not consume insects for food.

Do Bees Have Fur?

Do Bees Have Knees?