Dahlias are Stunning! But Are They Also Beneficial to Wildlife? 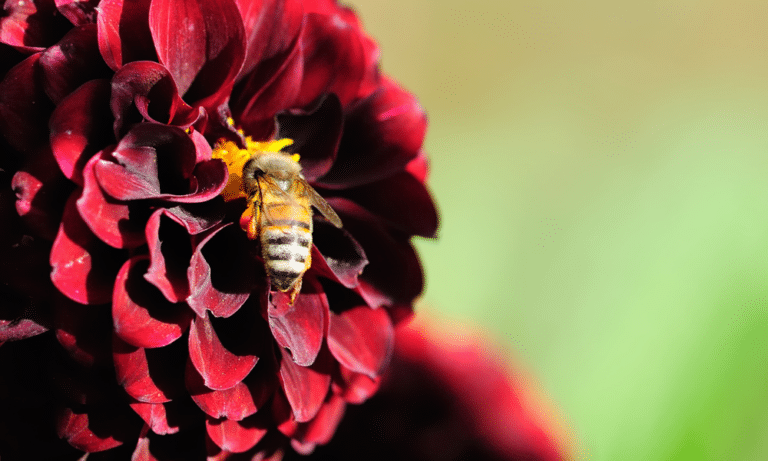 Dahlias are one of the most popular ornamental flowers for gardens. They’re intricate, come in a range of colours and add bundles of interest. But, are they beneficial to wildlife? Do dahlias attract bees, for example?

Yes, dahlias do attract bees but only if you grow the right varieties. Single-flowered dahlias are best for bees as they have easy-to-access pollen and nectar.

Ask most people to describe a dahlia flowerhead and they’ll go into detail about the intricate petal formations that come together to create perfect globes. This is exactly what a bee hates.

So, although dahlias do attract bees and they do provide nectar to bees, it’s important to know exactly which dahlias work well and which do not. Below we have outlined what you should look for in a dahlia if you want it to pull in pollinators along with 5 dahlia varieties that work particularly well:

What Do Bees Look for in a Dahlia?

Bees need easy access to pollen which is why those dahlias with complex flowerheads are no good except for their visual appeal to gardeners. Instead, if you want to attract bees using dahlias then you need to stick to single-flowered varieties.

When looking at a dahlia, if you can see the pollen and if the petals are in a single row then, chances are, it will be suitable for bees. If the flower is complex and intricate then it’ll probably be a little too fussy for a bee.

Ultimately, bees only have a few seconds to grab nectar before moving on to the next plant. They haven’t got time to go digging around foraging for nectar. When bees look for suitable flowers, they want to have instant access to the nectar.

The below flowerhead is stunning, there’s no denying that, but it makes it near-impossible for a bee to access the nectar. There’s nothing wrong with planting some flowers for their visual appeal. But if you’re sole purpose for planting a flower is to attract bees then the below would be a disaster:

If you’re still unsure which varieties to opt for, then these dahlias are great for bees and well worth growing – see if can you spot similarities between them all in their appearance:

Bishop of Leicester is a prime example of a bee-friendly dahlia. It has pink-tinged petals with a very open centre making it incredibly easy to access the nectar and pollen within.

In terms of aesthetics, it has dark leaves that make the pale flowers pop and is a great way to add contrast to flower beds. They produce their flowers from the middle of summer to the start of Autumn.

Bishop of Llandaff is one of the easiest dahlias to grow as it can grow in chalk, clay, loam and sand soil conditions. They have stunning flowerheads yet still have easy-to-access nectar for bees that is available inside very open flowerheads.

It has full flowerheads but still have have a central area that’s easy to get to for bees and other pollinators.

Honka (and other star dahlias) are lacking in petals which means the nectar is easy to grab from most angles for a range of pollinators including bees, of course. Star dahlia are available in a range of colours.

Bishop of Auckland Dahlia is another that can grow well in most conditions and works great in a mixed herbaceous border. It has bright red flowers that draw bees in and then the centre is loaded with nectar that protrudes for easy access.

Bishop of Auckland has a fairly lengthy flowering period running from July until the first of the year’s autumnal frosts when you’ll need to lift the tubers and store them throughout the cooler months.

Do Dahlias Attract Other Pollinators?

First of all, dahlias will attract a range of bees and not just one type. Honey bees, bumblebees and solitary bees are all attracted to single-flowered dahlias.

But there are also other pollinators that will be attracted to dahlias and their open form including solitary wasps, hoverflies and some varieties of butterflies.

There is a further benefit to this. One of the problem pests on dahlias is aphids. If you attract hoverflies with dahlias then their larvae will eat the aphids for you.

If you’re interested in whether dahlias can draw in bees, butterflies and other wildlife then check out these common queries:

Like most pollinators, butterflies need to be able to access nectar with ease. Single-flowered dahlias will attract butterflies but complicated, double-flowered varieties will not be beneficial.