Skip to content
Home >> Bees >> Do Bees Have Lungs?

Do Bees Have Lungs? 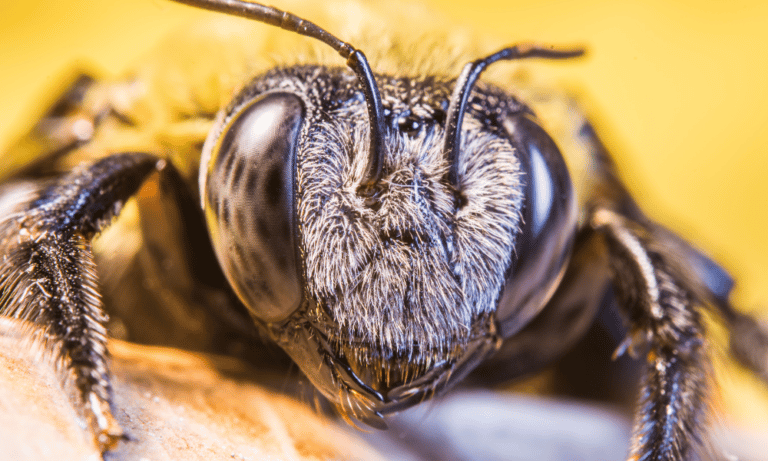 Bees are unique and fascinating creatures. We always hear about how bees are important for the planet and how if bees were to go extinct, humans would follow shortly. But have you ever taken the time to look at bees on a simpler level? How do bees breathe? Do they have lungs?

No, bees do not have lungs. They actually have thin-walled air sacs located throughout their bodies. Each of these air sacs is attached to a small trachea. The air sacs control how much air is taken in by the bee by contracting and relaxing to move air.

Learning how bees respire, if they can suffocate, and how they live without lungs is interesting and eye-opening. We generally do not think about how insects are able to breathe without lungs or a circulatory system like mammals. So…

How Do Bees Breathe?

When you think of breathing in humans and other mammals, you think of the process of inhaling and exhaling air:

When we inhale, our lungs expand, and a physical process happens within them as oxygen is pulled from the air into our cells and carbon dioxide is taken from the cell waste and transferred out of our lungs on the exhale. The haemoglobin in our blood then transports the oxygen throughout our body.

In humans and other mammals, the respiratory system and circulatory systems are well connected and integrated.

For bees and other insects, this is not the case.

Bees do not have lungs, but instead, have thin-walled air sacs located throughout their bodies. They have two larger sacs in the abdomen that we could consider lungs for lack of a better comparison.

The sacs are located within the bee. On the outside of the bee are spiracles, or openings. These spiracles connect to the tracheas of the bees which then go down to the air sacs.

Do Bees Have a Heart?

Yes, bees have a heart and an aorta. Bees do not have blood like humans do, however. Nor do they have veins and arteries.

Do Bees Have a Brain?

Yes, bees do have a brain. In fact, all species of bees are known to have brains. It’s reported that bees have a brain of less than two cubic millimetres in volume.

Can a Bee Suffocate?

Yes, bees can suffocate without an adequate oxygen supply. Since bees need oxygen to survive, cutting them off from a supply will cause them to suffocate.

Scientists say that if a bee is placed in a glass jar with a tight lid, the bee will die within 15 minutes from a combination of lack of oxygen and heat.

A bee’s unique way of breathing does offer them a slight advantage and chance of living if cut off from oxygen or if submerged underwater. Bees can store some oxygen within their air sacs for use during a situation like this.

If a bee is submerged underwater, it will close off its spiracles and use the oxygen stored to breathe.

However, this only works for a short time. Bees would have no way to release the carbon dioxide from their bodies with their spiracles closed. They also cannot pull oxygen from the water like a fish can.

Since bees cannot swim, it is almost impossible for them to resurface to get air. If a bee is submerged in water or other liquid, it will most likely die.

How Do Bees Live Without Lungs?

Bees have a unique and fascinating way of breathing that is actually very common among many insect species. Bees have openings all over their bodies called spiracles. These spiracles allow air to enter the bee, go down the trachea, and settle into the air sacs.

Once the air is in the air sacs, oxygen is pulled from the air into the bee’s body and carbon dioxide is removed from the bee and sent back up the trachea and out the spiracles as an exhale.

The air sacs located within the bee act like lungs. They will contract and expand to pull in and push out air, oxygen, and waste products. The air sacs are controlled by contracting and relaxing muscles in the abdomen of the bee.

If you notice a bee contracting their abdomen quickly, they are trying to get more oxygen into or trying to expel extra carbon dioxide out of their bodies. Think of this as when you are breathing heavier after a vigorous workout.

Bees, like many insects, do not have lungs or a respiratory system like mammals and humans do. Bees use a complex system of spiracles, or openings, all over their bodies as the starting point of respiration.

Once air comes in through the spiracles, it goes down a tube-like organ called a trachea. The trachea leads to an air sac located within the bee. It is in the air sacs the transfer of oxygen and carbon dioxide within the bee’s body happens.

This is how a bee breathes. After the transfer, the waste products come back up the trachea and out the spiracles as an exhale, much like we humans exhale carbon dioxide.