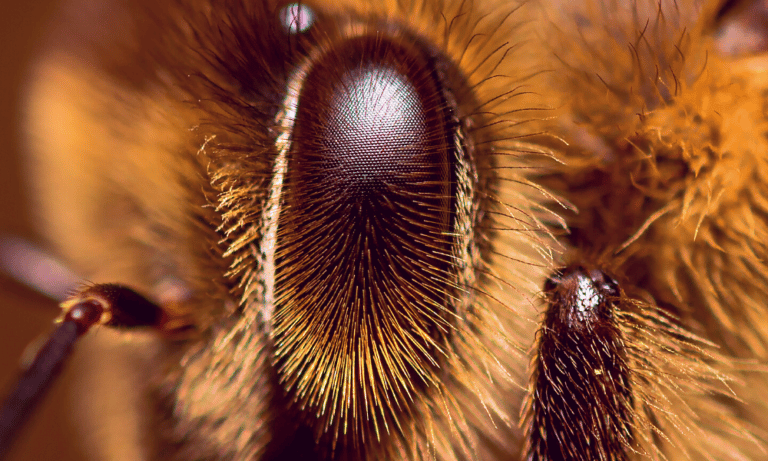 When we think of bees, an image of a furry insect with huge black eyes appears in our minds. But what do you actually know about these eyes? You rarely see them move if you manage to get up close to them which opens up a range of questions. However, the first and the most obvious question is, do bees blink?

Unfortunately, the answer to this is still unknown as experts are still conflicted. Some believe that bees can blink, while others tend to disagree. Not helpful, we know!

Do Bees Have Eyelids?

No, bees do not have eyelids. Instead of eyelids, bees have small hairs growing on their eyes. The hair helps bees recognize the direction in which the wind is blowing and thus, helps them navigate better.

The hair is microscopic and is called setae. As well as aiding in pollination, they also help bees detect humidity.

In addition, the hair protects the eyes as it avoids pollen from getting stuck in the eyes. The distance between each eye and hair is roughly the same as the size of a piece of pollen. This is because the hair helps in collecting pollen.

If the pollen from the eye hair isn’t collected in the pollen baskets or corbiculae, it makes flying difficult for bees.

Do Bees Have Eyes?

Yes, bees have five eyes in total. If you look at a bee very closely, you will observe three dots placed on a bee’s head. These dots are black and are a bee’s eyes.

These are the ‘ocelli’ or the simple eyes that a bee has and can only sense light, not shapes. The ocelli are triangular, and it isn’t easy to locate them since they are very small. In addition, they help bees understand whether a predator is coming toward them or not.

Bees also have two eyes on each side of their head. These eyes are composed of several lenses that help bees have a wider view of their surroundings.

These eyes are known as compound eyes, and they help bees identify patterns, which plays a crucial role when looking for plants. Compound eyes are the easiest to locate since they are very large.

They have little tubes composed of eight cells and are very responsive to light. Four cells are responsive to yellow and green lights, two are sensitive to blue lights, and one responds to UV lights.

In addition, a bee’s eyes can also sense polarized lights. These lights travel in a single direction and appear when air molecules disperse the photons in the atmosphere. Bees can scan and detect these lights.

This helps bees locate the sun’s direction, even after sunset, and helps them find their way back home.  Even though bees are said to have super eyesight, they still struggle with recognizing the colour red.

Do Bees Have Eyebrows?

No, bees do not have eyebrows, nor do they have eyelashes. However, as mentioned earlier, they have loads of hair on their eyeballs that make up for the lack of eyelashes and eyebrows.

It’s rare for any insect to have facial features like eyebrows which humans tend to have. Their faces tend to be a little more simple in structure.

Do Bees Close Their Eyes to Sleep?

Since bees don’t have eyelids, it’s very difficult to figure out whether they’re sleeping or not and if their eyes are closed.

However, many experts believe that bees close their eyes while sleeping. They don’t close their eyes in the same way that a human does but, instead, use the hairs on their eyes balls to shut the light out and to keep debris from nearby plants away.

Another sign to look out for to determine whether or not a bee is sleeping is to look at its antennae. While sleeping, their antennae will stop moving or lie down sideways. The antennae play a crucial role as a sensory organ and help detect senses such as taste and smell.

Yes, bees do make a noise that sounds like screaming… But not how you would expect. They actually move their wings in such a way that produces a noise that could be compared to screaming.

Bees are, perhaps, the most important pollinator we have on our planet. Bees’ eyes have one of the most unique anatomies an insect can have. This is because they do not have any eyelids, eyebrows or eyelashes.

This is why many scientists believe bees do not blink, and some think a bee shuts its eyes while sleeping. However, whether a bee is asleep or not can be deduced by looking out for minute details such as the movement of their antennae as it’s pretty hard to tell just from looking at their tiny eyes.

Do Bees Come Out at Night?

Why Are Honey Bees So Docile?

Do Honey Bees Kill Other Insects?