Skip to content
Home >> Bees >> Do Bees and Wasps Get Along?

Do Bees and Wasps Get Along? 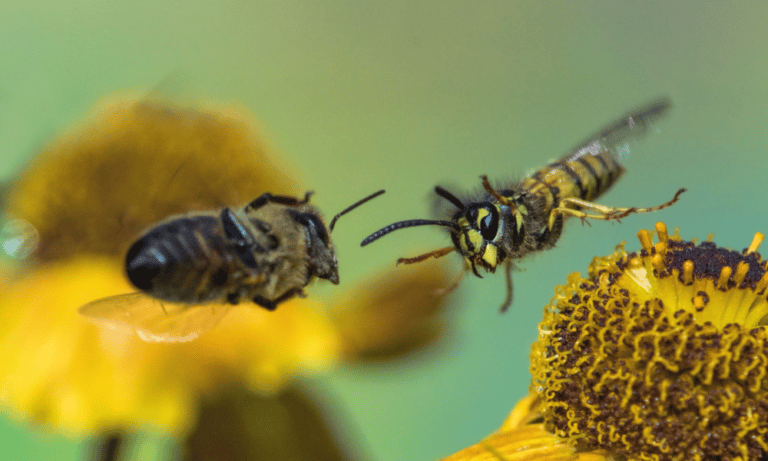 One similarity between bees and wasps is that the food source for both is nectar. Since both of these insects feed on the same thing, there is a high chance of dispute among them in situations where there are limited flowers. This brings us to the question do bees and wasps get along?

No, bees and wasps do not get along well as wasps often attack bees and will also attack bee hives.

The main reason is that wasps view bees as food, and bees do not consider wasps as welcome guests in their beehives. Wasps attack bees in an attempt to provide food for themselves.

A specific wasp species, known as cleptoparasitic wasps, attacks bees to provide food to their larva and a host for their home. Unfortunately, the world of insects isn’t all bees and butterflies. It’s actually quite a nasty, brutal place to be.

Wasps are notorious for attacking bee hives regularly. They do so either to rob the bees’ nectar from the hives or steal the bees’ larvae and provide it to their own larvae as food.

The sugar in honey fulfils the wasps’ need for sugar. In addition, during summer and the beginning of autumn, wasp’s larvae start hatching, and the wasps go out in search of a sweet fix – this is when they are most likely to attack hives.

If only 1 or 2 wasps are attacking a bee hive, the bees can easily defend themselves. This resistance from the bees results in a fight where both parties sting each other.

Wasps will try to attack and enter a bee hive if they think the bee’s colony isn’t strong enough. They attack multiple hives until they are finally able to break into one. Often bees that are trying to protect their hives are killed by wasps.

Why Do Wasps Attack Bee Hives?

Wasps attack bee hives so that they can steal honey and nectar to feed on. They will also steal bee larvae to feed to their own larvae.

Yes, wasps can prove to be very lethal for bees and often end up killing them. One of the most common reasons why wasps may kill bees is to feed on them. Even as larvae, wasps have a desire for protein.

There is a certain wasp that kills bees in an extremely brutal manner where they rip the bee’s head off and then take the thorax to their nest, which they then give to their larva.

Another common reason a wasp kills bees is when a bee tries to defend against the attack on its hives from wasps. However, if the bees are unable to defend themselves, the wasps take no time to kill the bees.

Do Wasps Kill Bees In the Open?

It is rare that a wasp will attack and kill a bee in your garden. In fact, you’ll often see them flying around together in the garden, foraging for nectar, without attacking one another.

Bees vs Wasps vs Hornets

Bees, wasps, and hornets have similar features, such as their colour and rough size. However, some very minute differences can help you easily distinguish between the three.

Size is another prominent distinguishing feature among the three when you look a little closer. Bees are the smallest among the three insects. Wasps have a length of around ¾ of an inch. Lastly, hornets appear to be the largest as they have a size of almost one whole inch, if not more!

In addition, some bees die after stinging other insects, so they will avoid doing so. However, in comparison, hornets and wasps have a much more aggressive nature and are avid attackers who will night die post-sting.

Bees generally appear more bright and fuzzy compared to hornets and wasps. Carpenter bees have shades of purple or blue on their body, and honey and bumble bees appear smaller with gold hair.

Generally, bees have wider wings, whereas wasps have the opposite.

When it comes to being beneficial, all three insects come with their own set of benefits. Hornets and wasps help manage pests in farms and gardens by eating the insects that harm crops. Wasps also help in pollination.

Since bees and wasps have their eyes set on the same thing, it is very rare and hard for both insects to get along. This is because both need the flower nectar to fulfil their needs. In case there isn’t enough for the two of them, the wasps wouldn’t shy away from putting up a fight.

Since the wasp is an aggressive insect, it often ends up brutally killing the bees either to feed their larva or feed on sugar from the honey present in beehives. In addition, wasps and bees also fight when there aren’t enough flowers in the vicinity.