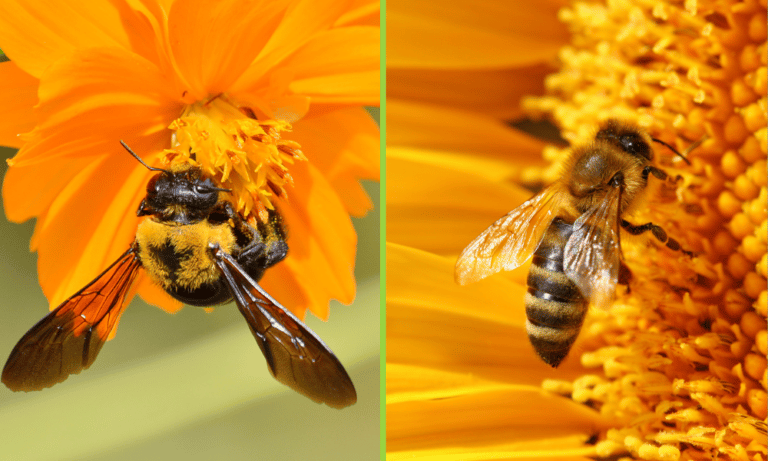 There are over 25,000 recorded species of bees around the globe. It can be difficult to recognise which bee you’re looking at when you’re out and about. Two common species of bee are honey bees and carpenter bees. But, do you know how they compare?

Many of the different species of bees look very similar. The main differences will be their living habits. Some are social creatures and live in hives, such as the honey bee. Others are solitary, such as the carpenter bee.

What is a Carpenter Bee?

The Carpenter bee takes its name from its predilection to drill into softwood to build a nest. They’re considered large bees, growing up to 1 inch long, and the male and female do look and behave slightly differently.

In the UK, these bees have a yellow hairy band around their thorax. Whereas the abdomen is black and hairless and like a hard, shiny case.

You’d need to get up close to distinguish between a male or female because they both have black heads, but the male has a tiny white marking on his.

The female is the one doing all the hard work in the construction of the nest. She uses large mandibles to drill tunnels into the soft wood so that she can lay around 4-6 eggs.

Once the tunnels are ready, she’ll create protective cells consisting of nectar and pollen before she lays each individual egg in the cells. Once the eggs are laid, she’ll cap off each one in the tunnel with a plug of regurgitated wood.

The male carpenter bee, on the other hand, is very territorial around the nest and will bombard anything, even humans, that get too close.

This is quite surprising because only the female has a sting. The male is a brave little fellow, and he’ll buzz his wings loudly as he discourages potential intruders.

Of their 6 legs, the top parts are hairless, with the bottom segment covered in dark hairs.

The summer brood females will return to the same nest to dig out more tunnels for their own eggs. To find a mate, they will perform a ‘bobbing’ dance that usually involves around five females and a dozen males.

They’ll copulate during flight and although the male can live for up to 1 year, he will die soon after mating. The female lives longer, up to around two years.

What is a Honey Bee?

This is another bee named after its primary function, producing honey, of course.

They can grow up to 1.5 inches in length, though the female grows more prominent than the male. It could be because it’s the female worker that does all the work in the hive, including the collection of nectar.

The honeybee, in the UK, also has a hairy thorax, but its abdomen has light hairs that form orange stripes.

Every female bee has a specific job, such as nursing the eggs, cleaning the hive, or gathering nectar to produce honey. They’re allocated their job through their genetics and will be born into their role.

The male, also known as a drone, is lazy compared to the female.

He’ll enjoy the labours of the female and eat the honey that’s stored in the hive. Their main task in life is to mate with the queen when she flies from the hive.

After mating, they drop to the floor and die because their lower abdomen is ripped from their body in the mating process. That’s most likely why males only make up around ten percent of the colony.

The queen stores the spermatozoa from her mating session and uses it to lay up to 1,500 eggs a year. She can keep doing that for up to five years. Even more fascinating is that she can decide if an egg is male or female. For the female eggs, the queen fertilises them with spermatozoa, whereas unfertilised eggs will become males.

There are a few differences, but the obvious one is that honeybees produce honey, but carpenter bees do not.

Because it takes a lot of nectar to fill the honeycombs, it requires thousands of bees to produce honey. Honey bees work together to do this, but the carpenter bee prefers solitude, living alone in its nest.

Another difference is that carpenter bees have a bad rep, considered to be pests because they drill holes in wood.

To discourage them, if you treat your wood they won’t settle there. But honeybees are considered useful because they produce honey that we can eat, and don’t cause any damage.

At first glance, you may think that these bees look alike because they both have a fluffy yellow band around their thorax.

But look closer and you’ll see that the similarity ends there. Their abdomens are very different, as we described earlier.

For both of these bee species, the females have a nasty sting, whereas the males are stingless.

Another similarity between honey and carpenter bees is that the females all have tiny pockets on their hind legs to collect nectar. the carpenter bee will use the spare nectar for their young. The honeybee put their spare nectar in the honeycombs for winter storage, and for the males.

These are but two species of popular bees in the UK, but there are many more. Never forget that, as pollinators, the planet depends on bees.

Do you have more questions about carpenter bees, honey bees and what makes them similar? Then have a look over these FAQs:

Is a Carpenter Bee or Honey Bee Bigger?

Generally, a carpenter bee will be larger than a honey bee. But this depends both on the sex of the bee in question and whether you’re focussing on length only or not as some honey bees will be longer than carpenter bees.