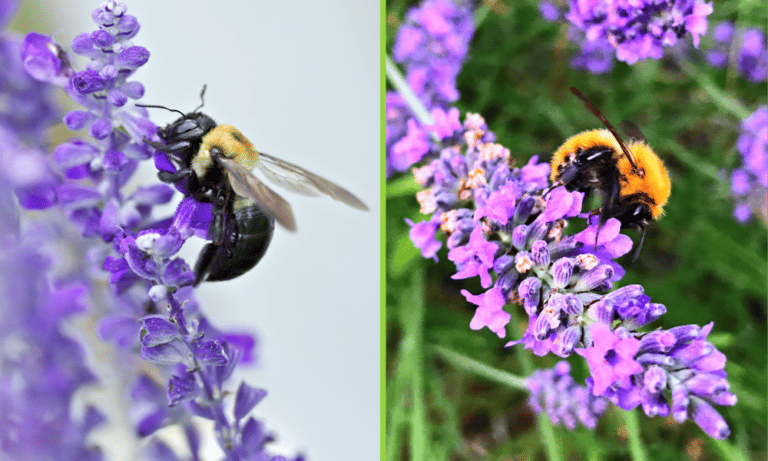 There are over 270 various species of bees in Britain alone. So, it helps to be able to distinguish them, and to gain an understanding of the life of the humble bee.

Some make honey, some don’t. Some live in hives, others live more solitary lives.

To add to the confusion, males and females of the same species can have different life cycles too. Then there’s the fact that they can all look quite different in size and markings.

One thing the bee has in common, though, and why we should all do our utmost to care for them, is because they’re vital pollinators.

Here we’ll look at a couple of these fascinating little creatures who share our world with us, the clever carpenter bee (Xylocopa Apidae), and the cute bumblebee (Bombus Hymenoptera):

What is a Carpenter Bee?

The Carpenter bee is not only a solitary bee; it’s also not a honey producer.

Both males and females have a yellow hairy thorax, with a shiny black abdomen. To tell if it’s a male, you’ll need to look at the blackhead because the male has a little white marking.

Nectar is their food source and while they’re jumping from plant to plant to collect it, they’re also doing a great job of pollinating too.

It’s the female who does all the woodwork labour, and she’s doing it for her offspring. Using her large mandibles, she’ll chisel out tunnels in the wood to lay her eggs, though she’ll only do it in softwood.

If your fencing is treated or painted, she’s unlikely to choose it for her home. She’s also the one with the stinger but, as with most bees, they’ll only use it as a last resort if they feel threatened or to protect their young.

If you happen to come across a carpenter bee hovering around, it will most likely be the male seeking out a female. Whilst he doesn’t have a stinger, he won’t be afraid to fly up close to your face to try and intimidate you, that’s because he’s a very territorial little fellow.

In fact, he’ll attack anything that moves, so that’s one way you can get rid of him; if you’re brave enough to stand still, he’ll soon get bored and move on.

What is a Bumblebee?

In contrast, the bumblebee lives in a colony, making them a little more sociable than a carpenter bee.

They don’t tend to have enormous colonies, usually accommodating any number of individuals between fifty to a few hundred bees. The colony will consist of a queen and her female workers.

The queen makes a waxy substance to protect the eggs. The bees also use it to store nectar, making tiny cups rather than the honeycombs of the honeybee.

They generally look fluffy and round with a few yellow and white stripes. It has a long tongue (proboscis) for collecting nectar. The females have pockets in their legs where the pollen gets trapped.

When they take it back to the hive, they store it in the waxy cups to be used to feed to their larvae, as well as nectar. They also use the nectar for winter storage for the queen, but they don’t produce huge amounts of honey.

The males (drones) have longer antennae so they can detect the pheromones of a queen. That’s because his only purpose in life is to mate.

Sadly, after mating, he is paralysed and dies.

Differences Between Carpenter Bees and Bumblebees

One main difference is how they look. At a glance, a bumblebee will appear furrier than a carpenter bee because the carpenter has a hairless abdomen.

As discussed, the carpenter is solitary, whereas the bumble is more social, living in a colony.

Getting more technical, they also have different flying habits.

A bumblebee tends to fly in straight lines when it’s out and about, whereas a carpenter bee darts around more. It could be because you’re more likely to see the male carpenter than the female.

He’ll be busy attacking everything he feels is infringing on his territory. For the bumblebee, you’ll most likely see the female as she’s on a mission to collect nectar and pollen.

Carpenter bees have a longer lifespan of up to a couple of years. Whereas the bumblebee will only live a matter of weeks, though this does vary in specific species.

Similarities Between Carpenter Bees and Bumblebees

As an insect, both species have the same body parts with a head, thorax, and abdomen. They all have 6 legs, antennae, and four wings.

Both species depend on nectar for life-giving energy.

Both females have the sting, with the male having none.

Both males die once they’ve mated.

Whilst they are both considered to be bees, there are more differences than there are similarities.

One thing for sure, though, is that the decline of our bees is worrying, so it’s worth learning all that you can to protect these great little pollinators.

Do you have more questions about carpenter bees, bumblebees and what makes them different, then check out these FAQs:

No, bumblebees do not produce honey. Although they collect nectar, they do not convert this into honey, and honey cannot be collected from bumblebees.

No, carpenter bees do not make honey. It is honeybees that are the most common producers of honey, hence the name.

Do All Lavender Plants Attract Bees?

Are Bees Attracted to Honeysuckle?

Why Are Honey Bees So Docile?