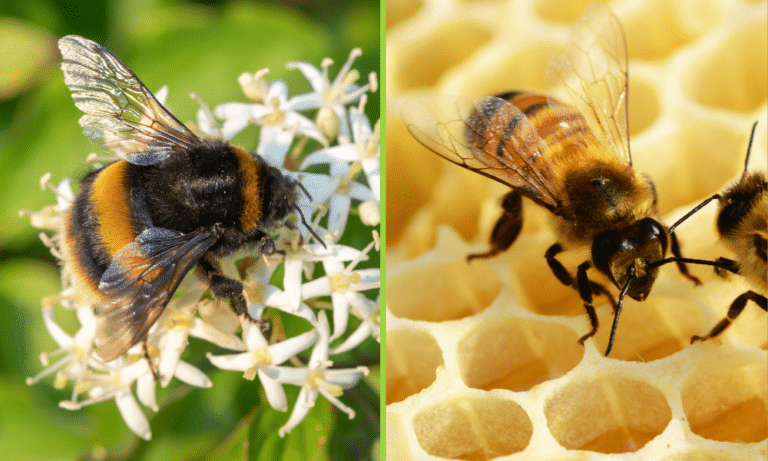 Bumblebees and honey bees and two of the most common bees you’ll come across in your garden. But do you know how they both differ? Let’s compare a bumblebee vs honey bee:

What is a Bumblebee?

Bumblebees live in social colonies, usually of a few hundred female worker bees. They are ruled by a single queen bee.

Only social colonies will have a queen bee, and she is the only female to lay eggs, leaving all the other female bees to care for the colony.

There will only be a few males (drones) hanging around at any time because the queen doesn’t lay many male eggs.

How does she know the difference between male and female when she’s laying an egg? Female eggs are fertilised with her collection of sperm taken from the single male she mated with.

That means all females have the chromosomes of a mother and a father. For the male, though, she doesn’t fertilise the egg, so males only have the mother’s chromosomes.

If he’s lucky enough to ever mate, after his performance he will die. This is because his reproductive parts remain stuck inside the queen. As they part ways, it rips away half of his abdomen.

Even more interesting is that she’ll only lay male eggs when she knows it’s the end of her colony life. At this stage, she’ll also lay eggs of females who may become queens and no more female worker eggs.

Complicated? There is so much to learn about the life and world of our little buzzy bees.

These bees look fluffy with orange stripes, which is most likely why we find them so cute. There’s nothing more soothing on a summer’s day than listening to the buzz of a big, fluffy bumblebee.

Bumblebees have been around for at least 30 million years and today, there are around 300 species. We know this from fossils. The UK is home to around 24 species of this fluffy little insect.

What is a Honey bee?

Another social bee is the honey bee. Once again, the female workers care for the hive, containing thousands of residents.

Within these giant hives, there will be around a 1% population of males. Most of the time, he lazes around the hive doing nothing but eating. In the summer, he’ll leave the hive to find a queen to mate with.

Any honey bee hive with drones hanging around, is a healthy sign that all is well in the colony. Though they tend to live on the edges of the hive and will be kicked out in the winter months and die of the cold.

Males are more prominent and darker than females, and he has a rounded bottom rather than the pointed abdomen end of a female. That’s because no male bees have stingers.

He has five eyes, as does his female counterpart, but two of them will be much larger to enable him to spot a queen bee when he’s out and about looking to mate.

Once the drones leave the hive for mating, bee swarms will soon follow, as new queens are mating to begin new colonies. When a brood nest produces mainly males, it means the queen’s supply of semen has come to an end and she is beginning to produce future queens.

Honey bee hives are at their largest and healthiest during the warmer months. Honey bee drones will mate with other honey bee species too, they’re not fussy.

Sadly, the lucky drone that gets to fulfil his destiny by mating, will die from the queen’s stinger. She doesn’t only mate with a single bee, she’s happy to mate with around 20 males, which serves as a natural way of ensuring a good mixture of genes.

Differences Between Bumblebees and Honey bees

The main difference is how they look, a bumblebee is larger, hairier, and has more of a round shape to its body.

We’ve mentioned that bumblebees have smaller colonies of only a few hundred, in comparison to honey bees with a few thousand.

This leads to the next difference which is the amount of honey they produce. Commercial beekeepers are more interested in domesticating honey bees. That’s because they may make much more honey.

Bumblebees prefer to nest underground, so this could make domesticating them a little harder.

Next is their lifespan, with honey bees living longer than bumblebees. Bumblebee queens will be lucky to last a year, and a younger offspring will take over her role. But a honey bee queen can live up to 3 years.

Let’s finish with their sting, of which neither male has one, but a honey bee female can only sting only once. In comparison, a bumblebee female can sting numerous times.

Similarities Between Bumblebees and Honey bees

We know that all bees are important pollinators and therefore, important to our environment. Although the bumblebee tends to visit more flowers than a honey bee, it’s effectively a better pollinator.

Honey bees stay on the same flowers until they’ve taken all the nectar resources from them, and only then will they move on to another plant.

Both species make honey for winter storage when there will be little available nectar around. This is the key to the survival of their brooding nests.

Whilst honey bees don’t live long enough to hibernate, the brood nest continues from one generation to the next. Using the winter storage of food to keep going.

The fact that both these species are social is another key factor to their survival. A social bee will work hard for the sake of the hive, whereas a solitary bee (female) only works hard for the survival of her eggs.

Do you have more questions about the differences and similarities between bumblebees and honey bees? Then check these FAQs out:

Do Bumblebees and Honey Bees Sting?

Yes, both bumblebees and honey bees can sting. Only the female drones and queen has the ability to sting in both types of bee, however.

Do Bumblebees and Honey Bees Get Along?

Yes, there is no form of animosity between bumblebees and honey bees and they can get on perfectly fine with one another.